Home News Render- Is this how the Toyota GT 86 sedan would look like? 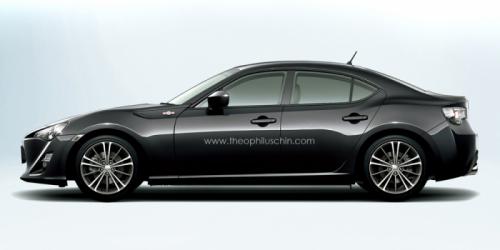 The cyber space has been suddenly swarmed with rumors that suggest that Japanese auto giant Toyota could soon come up with a GT 86 sedan. It is being said that the four-door version of the GT 86 is very close to getting a green light for production and seen here is a render which gives us an idea of what the GT 86 sedan could look like.

The four-door GT 86 is very likely to come with a 100mm extended wheelbase and could make its public debut at Geneva Motor Show in March next year.

It is being said that the GT 86 sedan will go on sale with the coupe’s 2.0-liter boxer engine. However, the car could also get a hybrid arrangement in future. This system would be derived from that of the Yaris Hybrid-R concept and could have at least 268 bhp (200 kW) of max power and a F1-inspired KERS unit.

It is expected that the Toyota GT 86 sedan would go on sale in late 2015 and would be priced close the coupe sibling.

Stay tuned to Motoroids for more updates on the Toyota GT 86 sedan.