Quick recap of the Mercedes Benz AMG GT- Now that Mercedes have bid goodbye to its respectable SLS AMG model with a handful of celebratory Final Edition models(a few have been destined for India as well-according to unconfirmed sources), it’s time for a worthy replacement. Enter the rather unimaginatively named AMG GT. However, Mercedes says that this will be more of a honed sportscar rather than a burly supercar that the SLS was- more of a 911/F-Type competitor.

Rumored to be sprawled across two variants, the AMG GT S and the AMG GT, with the S variant to sport the  M178 engine with 510 hp and 650 Nm (479 lb ft) of torque, while the later-appearing AMG GT model will probably use the same engine sourced from the upcoming C 63 AMG W205. Read more here.

Also on the offing will be active engine mounts for a more track oriented drive experience and a valve controlled exhaust system. The SLS AMG will be revealed in the autumn of 2014. Till then we have this new render from Autobild.de throwing some light on how the rear end might end up looking at- this could be as close as it gets. 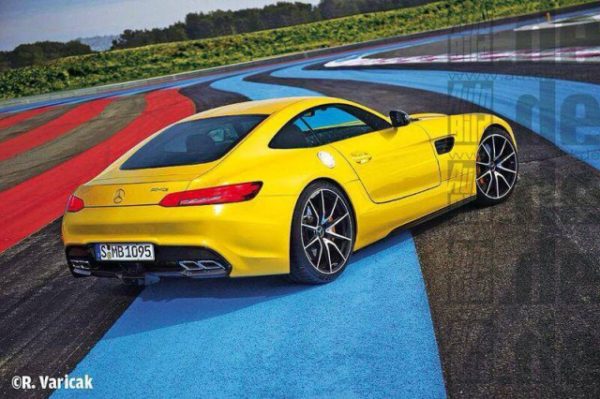 Check the gallery out for more images of the 2015 Mercedes Benz AMG GT.