17th of May decided to resign from the post of President, Passenger cars

division, Tata Motors. He has been with the group for more than 27

years. His involvement in Tata’s success with Indica and Nano is

mentioning. He worked hard to make Tata Motors one of the market

leaders. Thus, his position in Tata Motors was something people can only

But all of a sudden on 17th of this month,he made public his plan

of resigning. This move of his was unexpected though.  Rumours suggest

that he might head a new enterant in the passenger car business. He

might also look for something other than automotive industry too. His

and he wont be joining anytime before July. 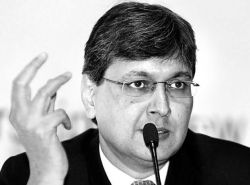 Vice-President (Commercial), will take charge of

the passenger car division while Mr Girish Wagh, Head of the small

car project and the man behind the Nano, will handle the manufacturing

operations and product development activities. There are no

clear reasons behind Mr.Dube’s resignation, though the industry is full

of speculations. We will have to wait till July to know what he plans to

[Photo and news- The Hindu]