Home Features Rags to Riches: Meet the barber who owns a Rolls-Royce

Although this is kind of an old story, we thought we’d still run it for some Monday motivation. And what’s more inspiring than a classic, rags-to-riches story of a person who had humble beginnings as a barber and now owns a Rolls-Royce Ghost, apart from a raft of other luxury cars. 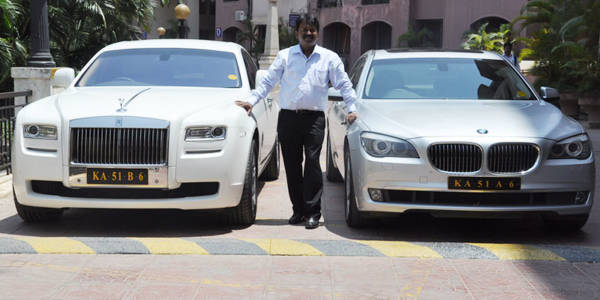 Ramesh Babu posing with the Rolls-Royce Ghost and a BMW 7 Series, part of his highly successful luxury car rental fleet

This is the story of Ramesh Babu from Bangalore, a barber by profession, who started off with a Maruti Omni that he procured way back in 1994 with his then measly savings. Apart from shaping up people’s coiffure, Ramesh started renting out the Omni, an idea put in his head by one Nandini akka, the lady whose house his mother used to work. One thing led to another, and the rest, as they say, is history. By 2004, a full-fledged car rental business with just 7 regular cars was up and running. Last year, the number had risen to a scintillating 200, which included 75 premium offerings- a range of Mercedes, BMW’s, Audi’s, a few luxury vans and his ultimate pride, a white Rolls Royce Ghost, which he bought in 2011.

Like all self-made men or women, Ramesh never had it easy in the beginning. The barber shop his father ran on Brigade Road’s St Patrick’s Complex was rented out for 5 Rupees per day. Ramesh’s family survived on that money. Babu was nine when his father died in 1979, leaving the family with nothing. After a fallout with his uncle, he inherited the family saloon, and took up working there till late in the night, honing his skill at the trade, in spite of his mother’s persuasion to prioritize on his formal education. In 1991, he started his own salon, Inner Space, which gained popularity among the city’s trendy bunch. The Omni came from the savings he managed to scrape off by sniping locks off people. 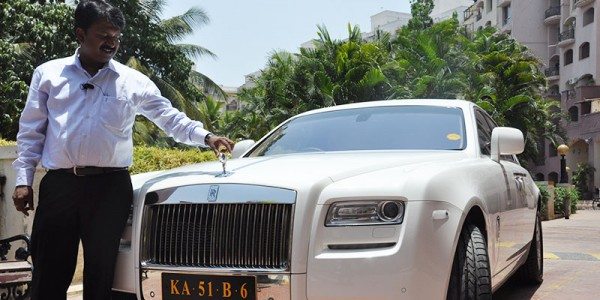 Post that, he put the trusty Omni into service for Intel as a rental, and fueled by the great response and influx of resources, bought six or seven regular cars thereafter. The intrinsic risk-taker in Ramesh saw him buy his first luxury car for the fleet in 2004. Bought for a princely sum of 40 lakhs INR (back then it was a big deal), it received a tremendous response and led him into buying a few more. Cutting all the noise out, losing the usual inhibitions, and having undying belief in his decisions, he made the car rental business soar, till in 2011, he bought himself his most prized possession- the Rolls-Royce Ghost worth 3 Crore INR (back then). And he says it has been a success as well!

That said, Ramesh has come across a fair amount of obstacles, challenges and pitfalls. The most recent being having to pay exorbitant amounts of road tax for his pricey fleet. Last April, he had to cough up over three crores in road taxes alone. Putting two and two together, he somehow managed to pay the authorities off, and whatever’s left should be sorted out by another year or so. According to Ramesh – “Every business will have recurring formidable challenges. The idea is to embrace them wholeheartedly and tackle them vehemently”. For the future, Ramesh now wants to add stretch limos to his fleet, and we wish him all the best in his upcoming endeavors!

What’s more, he still practices his skills as a barber, and charges a meager 100 bucks for a haircut. Pegged as the “Millionaire Barber”, Ramesh has been featured on TEDx Talks as well, and it’s without a shadow of doubt that even the world respects his perseverance, sincerity and hard work, that ultimately led him to dizzying heights of success that most of us die dreaming to acquire some day.