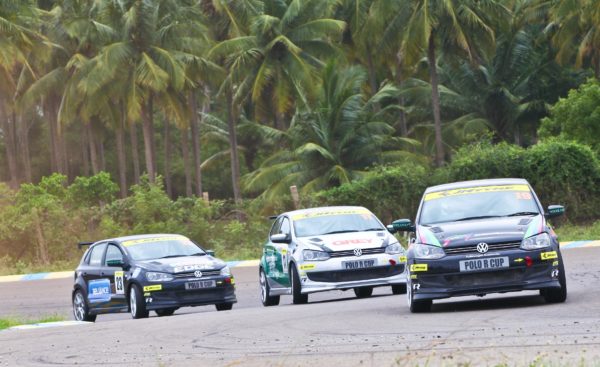 The JK Tyre Volkswagen Polo R Cup will return to Coimbatore for Round 2 of the season. After a short break of three weeks, the Polo race cars and their respective drivers are all set to take on the challenge for the title further. South African driver Jeffrey Kruger will be keen on continuing his form from Round 1 in which he had finished 2nd in Race 1 and had won Race 2. Mumbai’s Rahil Noorani is expected to be the man to challenge Jeffrey. With a win in Race 1 and 3rd place finish in Race 2, Rahil is not too far behind Jeffrey.

Kari Motor Speedway is getting all set to host the Round 2 of JK Tyre Racing Challenge 2013 and Volkswagen Polo R Cup 2013. During Round 1 of the season, Rahil Noorani had taken pole position for Race 1 and won it after leading from start to finish. The Race 1 had been cut short when an incident that forced the officials to bring out the red flags with 4 laps to go. In Race 2, with reverse starting grid, it was Rahil starting in 8th position while 2nd place finisher Jeffrey in 7th. Jeffrey made early moves to take lead in the race and went on to win it. Rahil finished 2nd while rookie driver Karthik Tharani claimed the final spot on the podium.

The drivers will pick up from where they left in Round 1. The 14 rookie drivers on the grid will look forward to improve their lap times and up their pace. The highly technical Kari Motor Speedway will offer further learning for the new drivers. Weather forecast shows sunny Saturday assuring dry Qualifying session. However, with some scattered showers predicted for Sunday, it will be exciting to see a mix of dry and wet races on the final day of the race weekend.

Along with the Polo R Cup action, enthusiasts will also witness a special race over the weekend of Volkswagen Vento track-prepped race cars. With the drivers being selected through a contest run by Overdrive magazine, Volkswagen has provided a platform for the enthusiasts to come and experience the racing action first hand. Specially prepared Vento cars will be used for this race which will feature FIA spec roll-cage, racing seats with 6-point harness, fire extinguisher system, 17-inch wheels with racing tyres, race-spec suspension and stripped down interiors.

The Polo R Cup 2013 has five race weekends. The season began on 19 July with Round 1 in Coimbatore and the current round being continued at the same circuit. Besides Coimbatore, races will take place at the Buddh International Circuit in Greater Noida and a street circuit (TBD) as below:

Thanks to its p roven concept of promoting young talent abroad, the Polo Cup enjoys the reputation of being an ideal stepping stone to enter professional racing. Building on its success of two great seasons since its inception in 2010, Volkswagen Motorsport hopes to make the Polo R Cup this year an exciting and challenging season in the Indian Motorsports calendar.