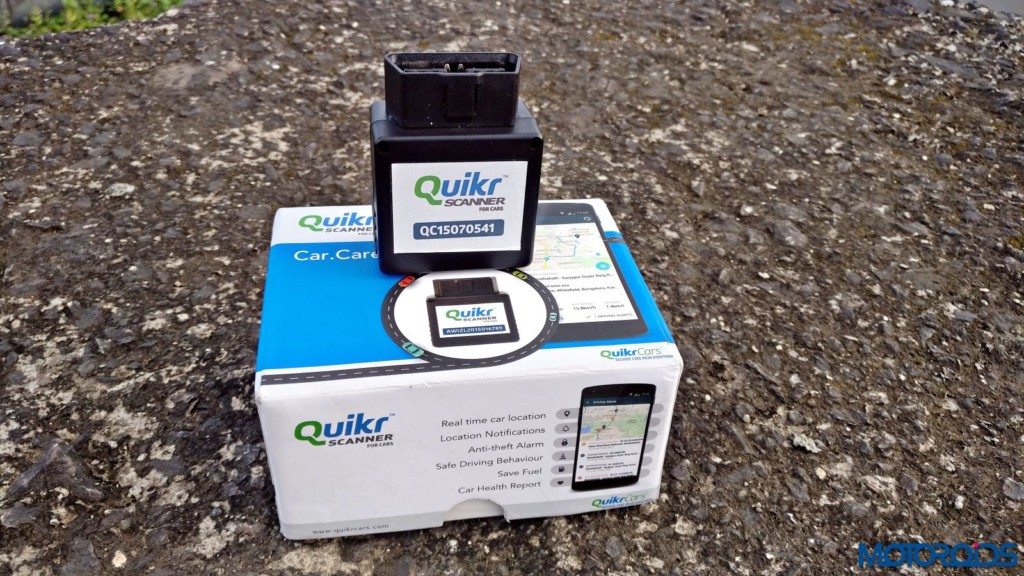 How often has it happened with you that you ended up with a broken down car in the middle of nowhere only because you didn’t realise that your ride’s engine coolant needed to be topped up? Worse still, many of you must have paid through the nose for not addressing a minor issue in time, leading to a much more catastrophic (and expensive) complication with your car. A stitch in time saves nine, they say. It is, thus, paramount to ensure that you closely monitor the health of your car to ensure that you are able to address the issues with it in a timely manner and nip them in the bud before they take a more gruesome form. The QuikrScanner for cars is a device which claims to provide an easy-to-use solution in this regard. The compact plug-and-play device which connects to all modern cars’ OBD II port, offers real-time engine diagnostics, along with a host of other features such as theft / tow alarm, GPS tracking, real-time engine monitoring for better fuel efficiency, safety and your car’s overall well-being.

We tested the new device on one of our fleet cars, and were pleasantly surprised with the kind of things  it could do for an everyday car user. So without wasting time let’s get to the product review and see what all it can do for you. 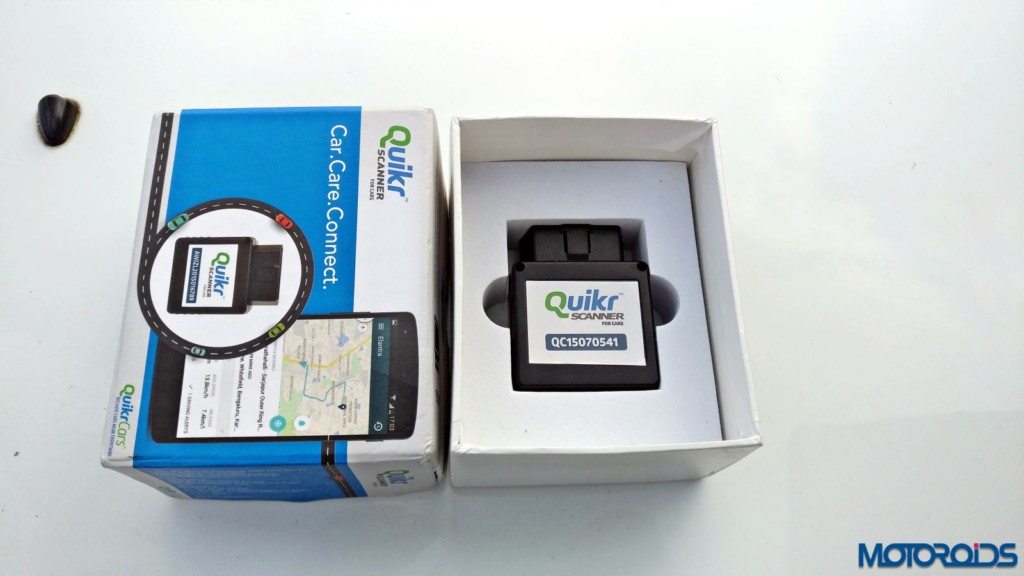 The QuikrScanner for cars is a compact on-board diagnostics device with an array of additional features. It’s very compact in size and can be connected directly to any car’s OBD2 port with no need for charging or requirement of any external power source. The OBD2 port in question is typically located under the dashboard. The location for the port varies from car to car, but in most cases, the port is easily accessible.  For instance, the said port was located under the bonnet open flap above the pedals in our test Chevrolet Beat car. 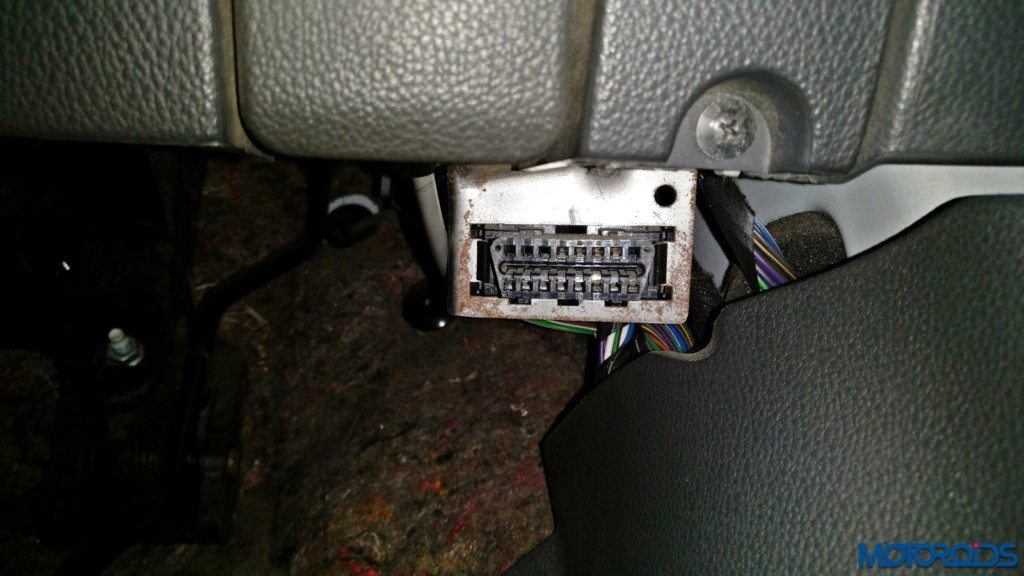 The device connects to your smartphone via an app (available on both Android and iOS platforms) to facilitate real-time tracking of your car. Along with keeping an eye on the well-being of the car’s workings, it can also locate your car precisely on the map, and act as an effective anti-theft device. The device requires a SIM card with an active data plan for connecting to the Quikr servers and thereon to your cell phone. 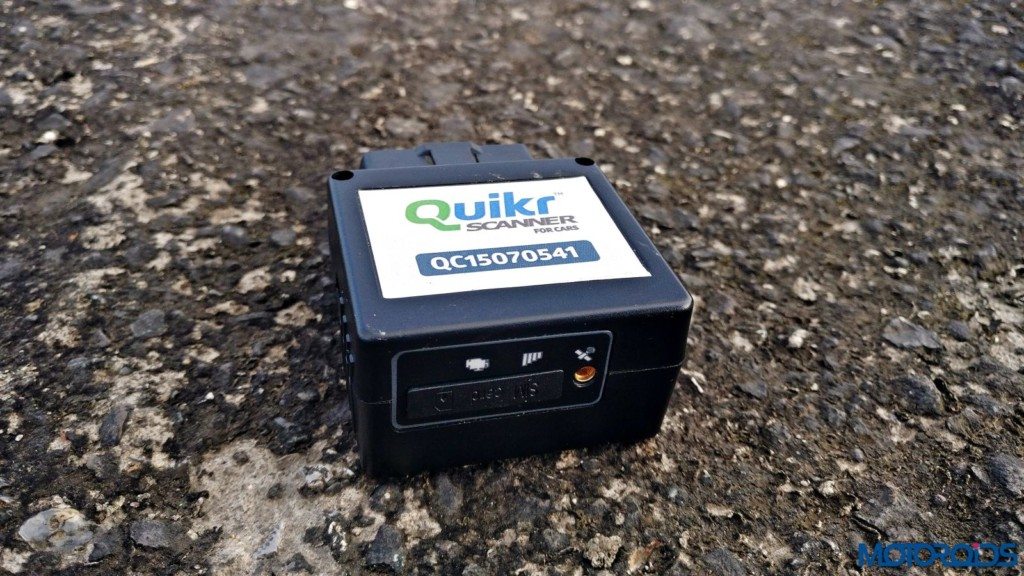 Why not connect directly to the cellphone through Bluetooth you might ask? Well, that’s to ensure that you are updated about your car’s whereabouts and stats even when you are away from it. Use of SIM allows for better security and monitoring from anywhere, which wouldn’t have been the case if the system would have relied on Bluetooth. Quite well thought out! 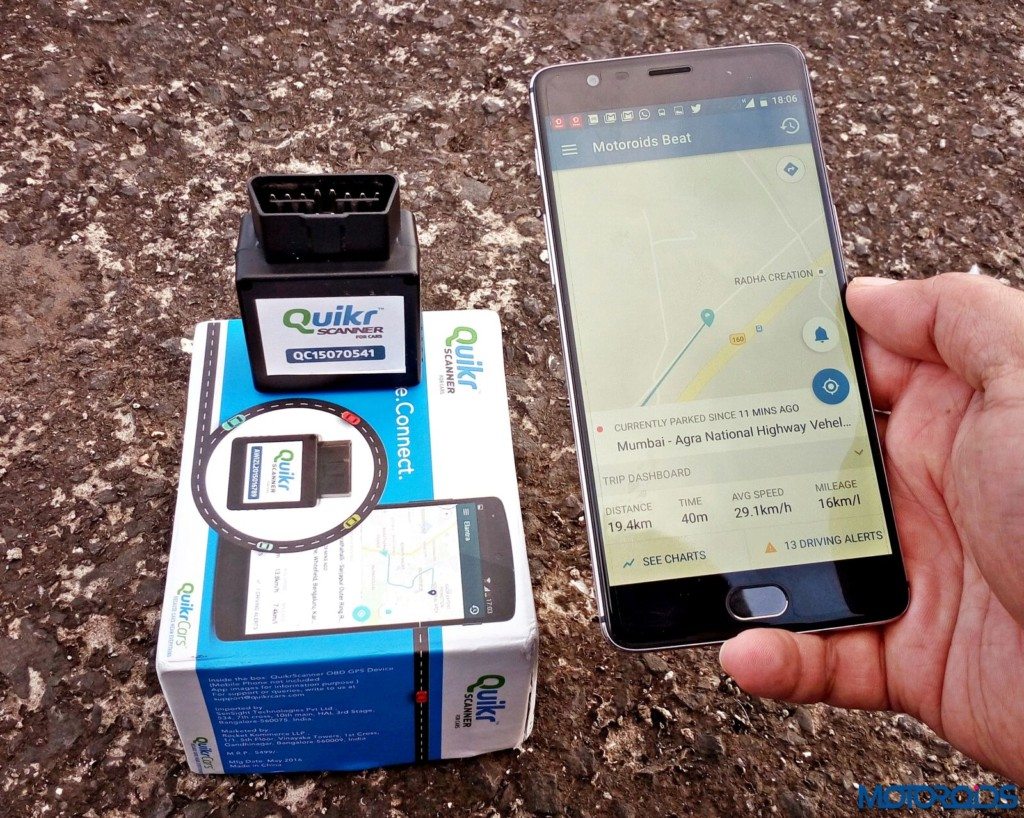 Here’s a top level list of the things this device does. 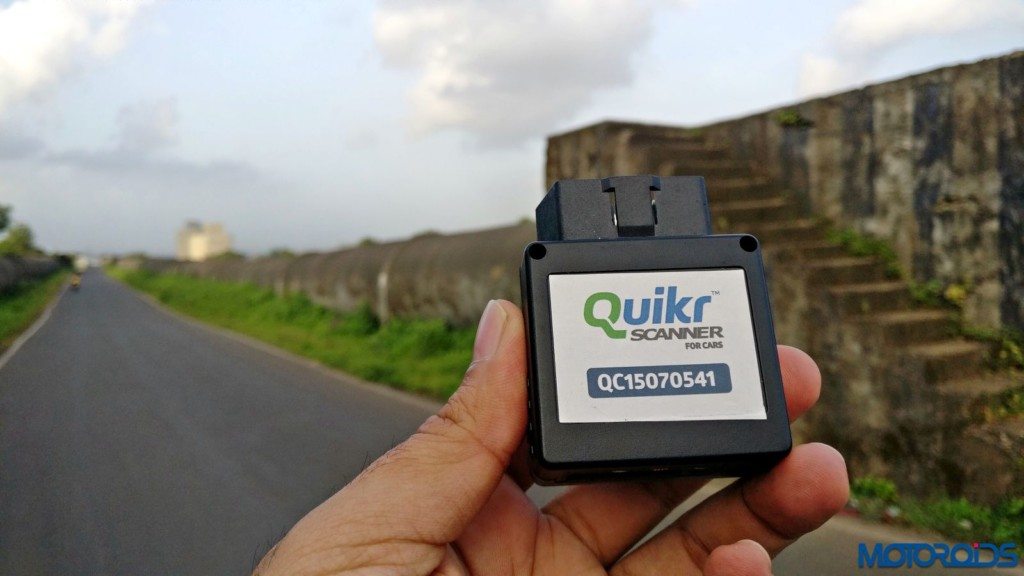 The box contents of the QuikrScanner package include a device neatly packaged within a foam casing. The device connects to the car through an OBD2 port and talks to the user’s smartphone through the QuikrScanner For Cars application that can be downloaded for both Android and iOS devices. 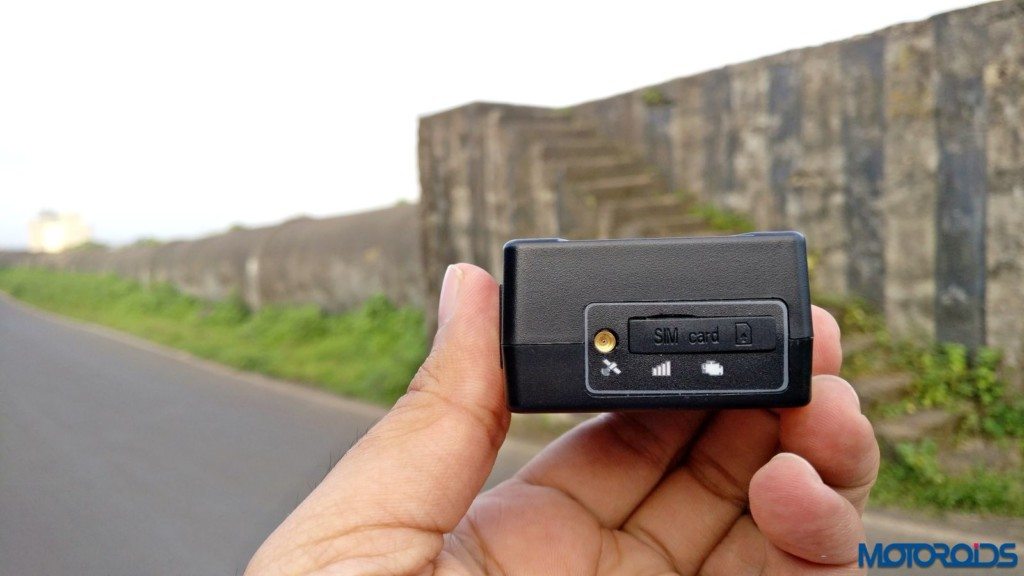 The scanner features a 16pin connector, a standard (not Nano or Micro) SIM slot, a mini USB port, and three notification lights denoting communication with the engine, sim network, and GPS reception. The device comes with an in-built GPS receiver, although its  functionality can be further extended through a port which allows for a connection with an external antenna. Once you have downloaded the app, and filled in the necessary information (screenshots provided below) you’ll automatically start receiving all the data about your car on the app via the SIM inserted in the device. 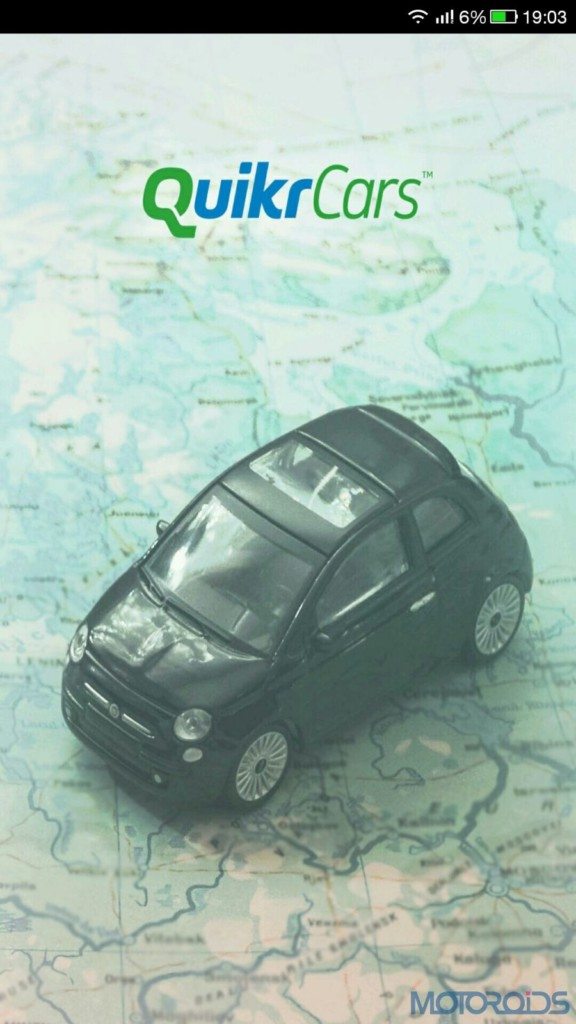 The app greets you with a login screen where you have to create a new account (standard procedures) and after you have registered yourself it asks you to choose your vehicle type (Private Car or Public Vehicle). It will then proceed to add our car details like Car name, make, model, fuel type, displacement, registration number and month of make. You can also custom define the settings for the driving and health alerts for your specific car. For example, we had set a limit of 60km/h for the device to fire an over-speeding notification. You can also define similar settings for acceleration and braking. These parameters can be of great use to monitor car usage by hired drivers who often over speed or accelerate in absence of owners. This feature is also of help to those who would like to monitor the speed and acceleration of cars used by drivers to ferry their kids or other family members around. 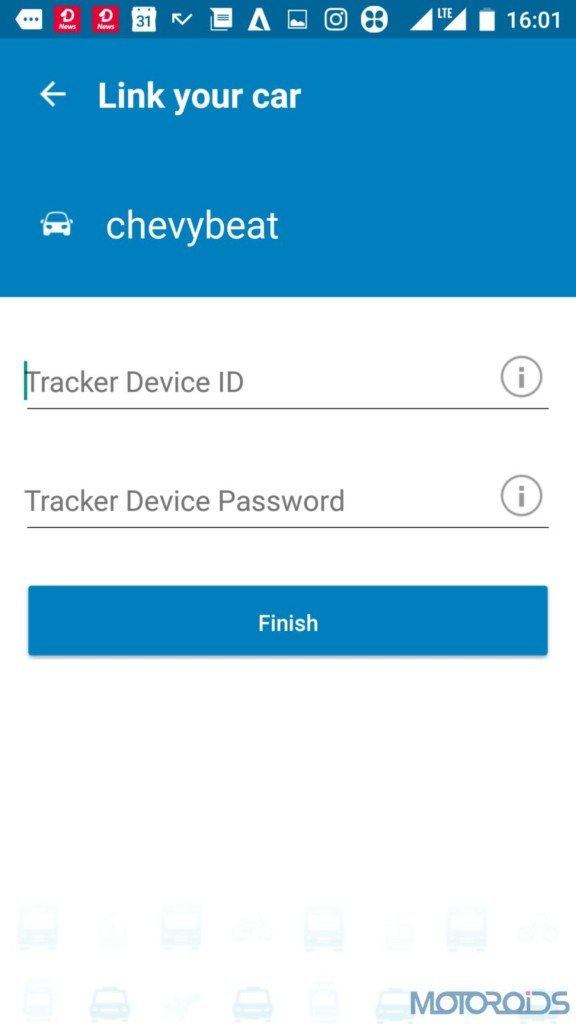 Once you’re done entering all the details, the home screen shows the location of your car on the map and a trip dashboard below it. The trip dashboard shows the Distance travelled, Time, Average speed, and Fuel Efficiency. All of the mentioned details are documented right from the time the scanner is installed in the car. The map gets three utility icons that help you open Google apps, show and set location notifications, and the current location. The clock like icon on top is used to access the trip history. 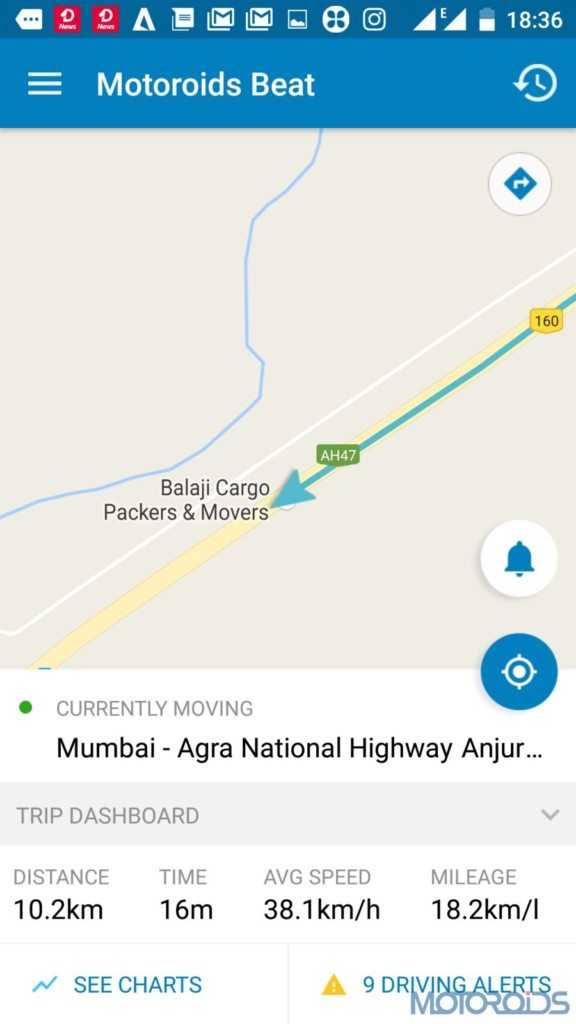 The top menu gives you a host of options like – 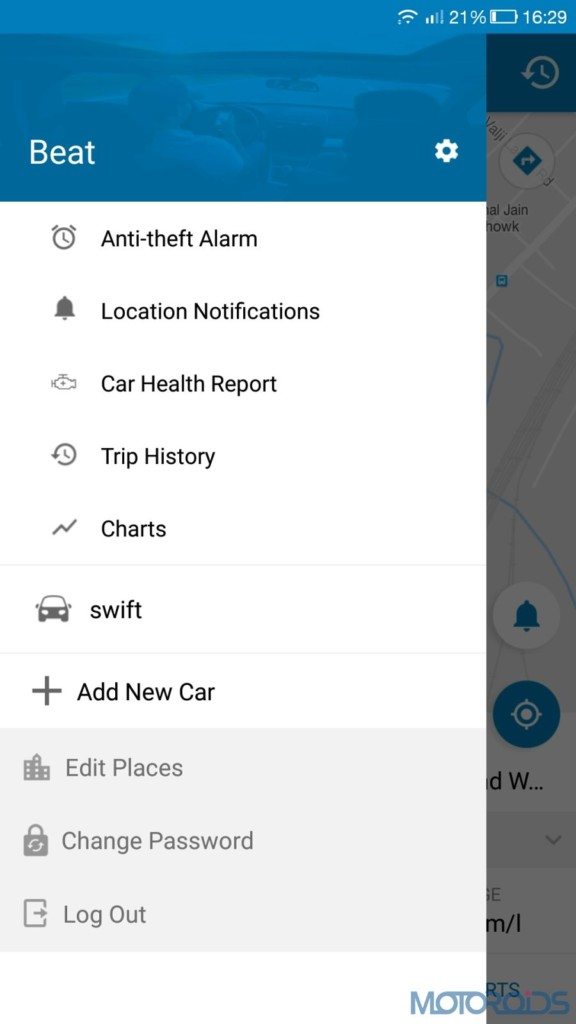 So now that you know about the App and the device, let’s hit the roads for a test run! 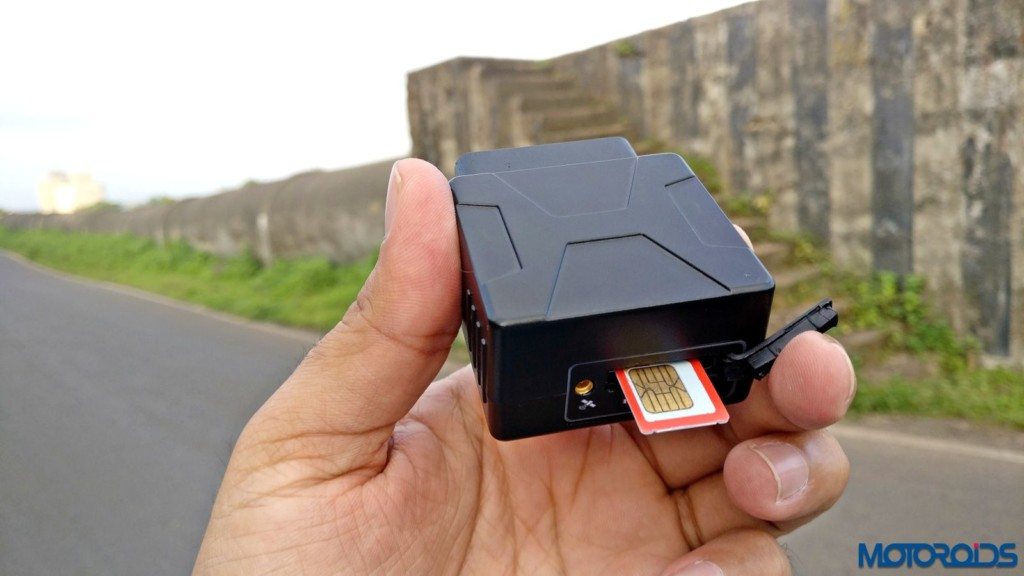 We loaded the QuikrScanner with a sim with an active data pack and used it in our Chevrolet Beat for this test. The OBD2 port of this car is located right behind the hood release handle. 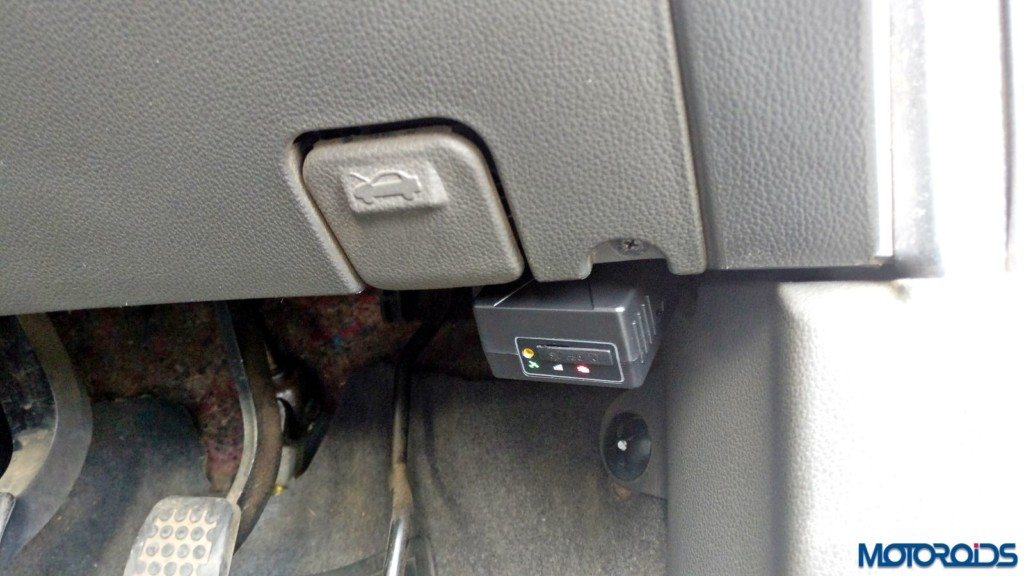 We put the device into place and installed the app on our phone. The scanner shared the vehicle stats with the help of the data pack and the same was reflected on the mobile app. We set the alert settings like so- 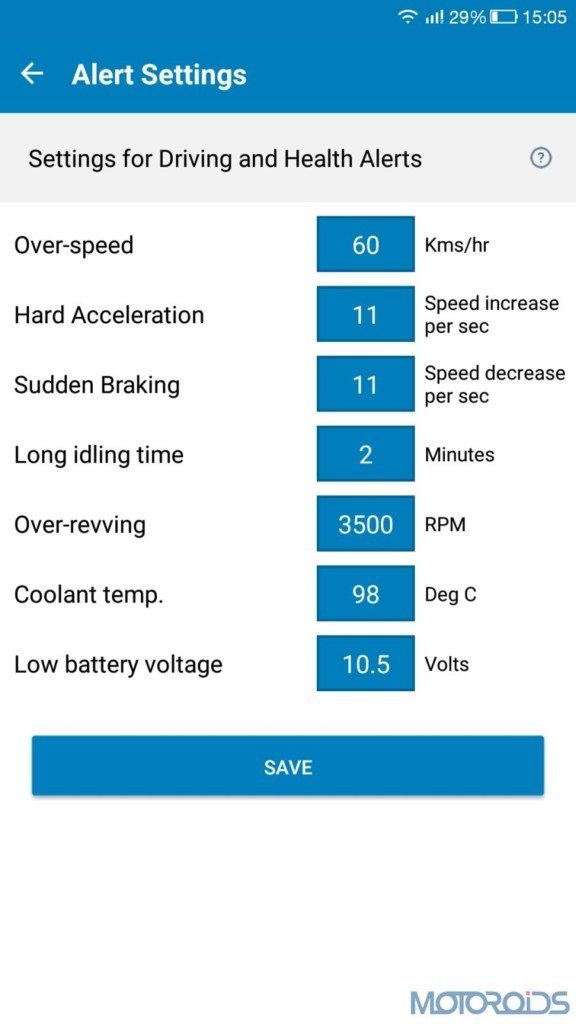 As we drove around the city the map showed us our real-time location and left a trail on the map as well. We took the Beat out of the traffic and set straight out on the Mumbai-Agra national highway and drove towards Nashik. Since we had set the speed limit to 60kmph the app was notifying us with Driving Alerts. Then wherever we would stop at a signal or take a halt and had kept the engine switched on for more than 2 minutes another alert would pop up. By the end of the journey we had almost a ton of Driving alerts, mostly due to breaching our self-imposed speed limit of 60km/h. Interestingly, the device also stores the time and location where the driver exceeds the set limitation and in a situation of sudden braking, the app would also record the speed at which the driver hit the brakes until what speed the brake was released. 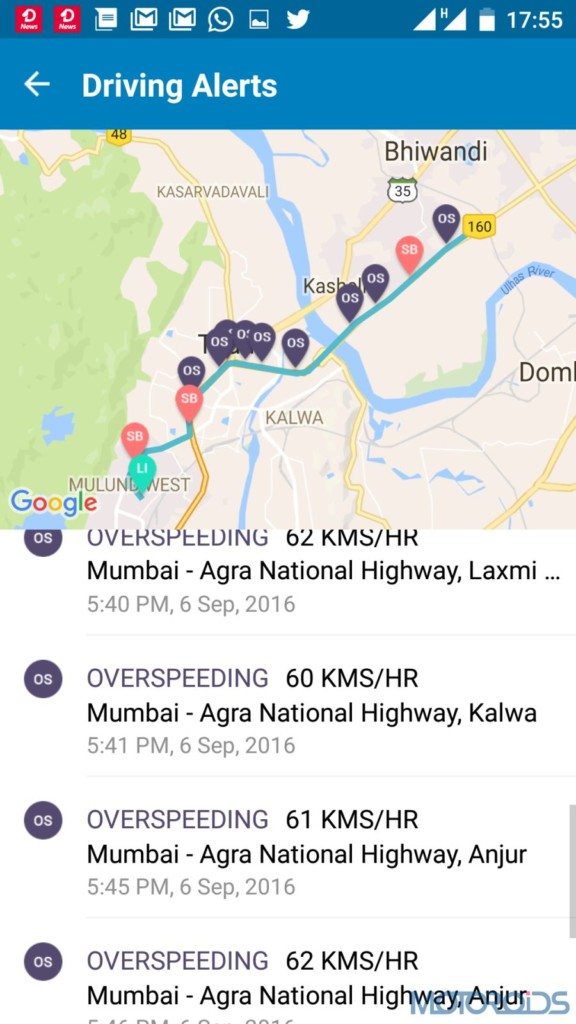 While on the run, the app would update us with the average speed at which we were moving, the distance covered and the time. It showed the average fuel consumption as well. This feature can turn out to be a blessing for those of your who don’t have an onboard trip computer on your cars. The feature can help willing drivers reduce their fuel consumption drastically. 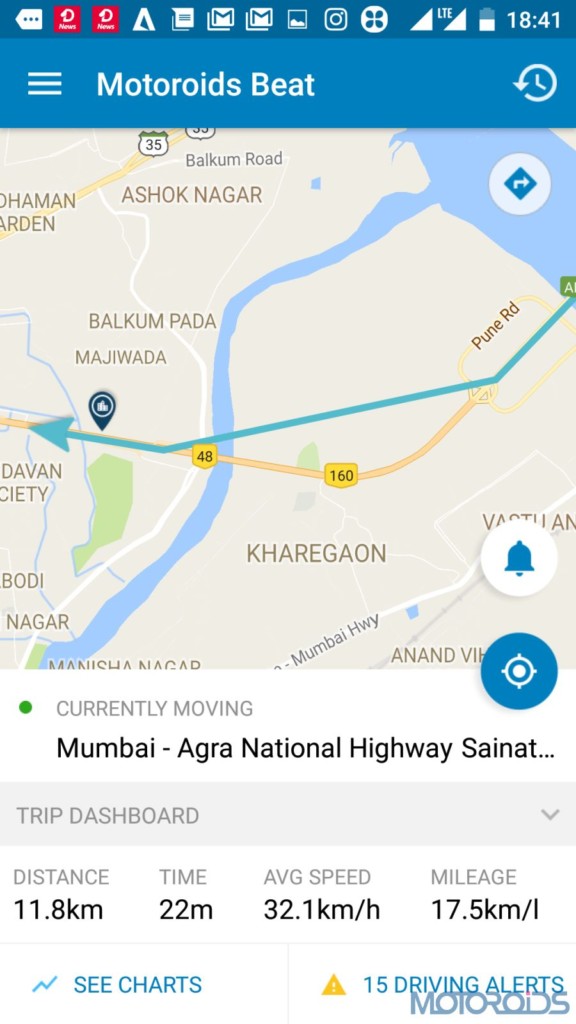 We saved a few places of interest on the app and set the Location Notification alarms on them. So whenever we were reaching the set destination our phone would ring and vibrate. You are allowed to choose when to be notified; 2kms from the destination or on arrival to the destination. In between our drive we took a few stops and removed the scanner a couple of times and this action was quickly notified on the app with a loud warning alarm.

We also put an anti-theft alarm on the app, wherein we were supposed to be notified if the car was started between a set time interval. Upon turning the car on between the set duration, we instantly received a loud alarm, notifying us about a possible theft. 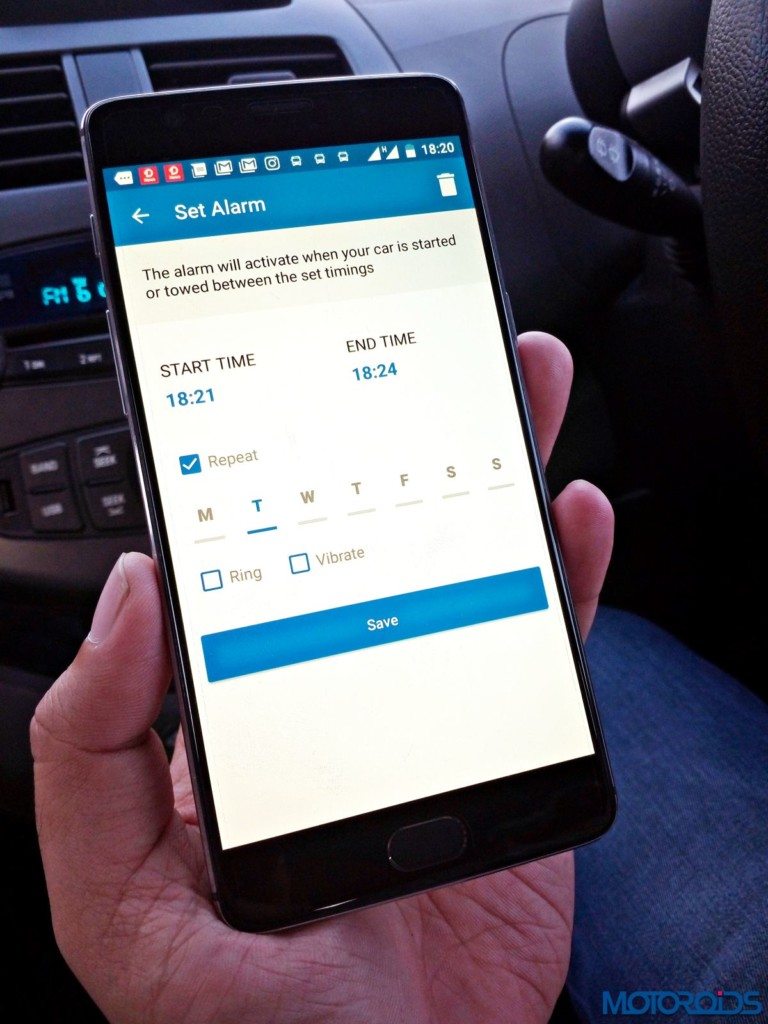 The sensors in the device also allow the users to monitor remotely if the car is being towed away without the engine turning on. Those features can be a real blessing for those who often park their cars in theft prone areas, or have unknowingly parked it in a place where there is a chance of the car being towed away. 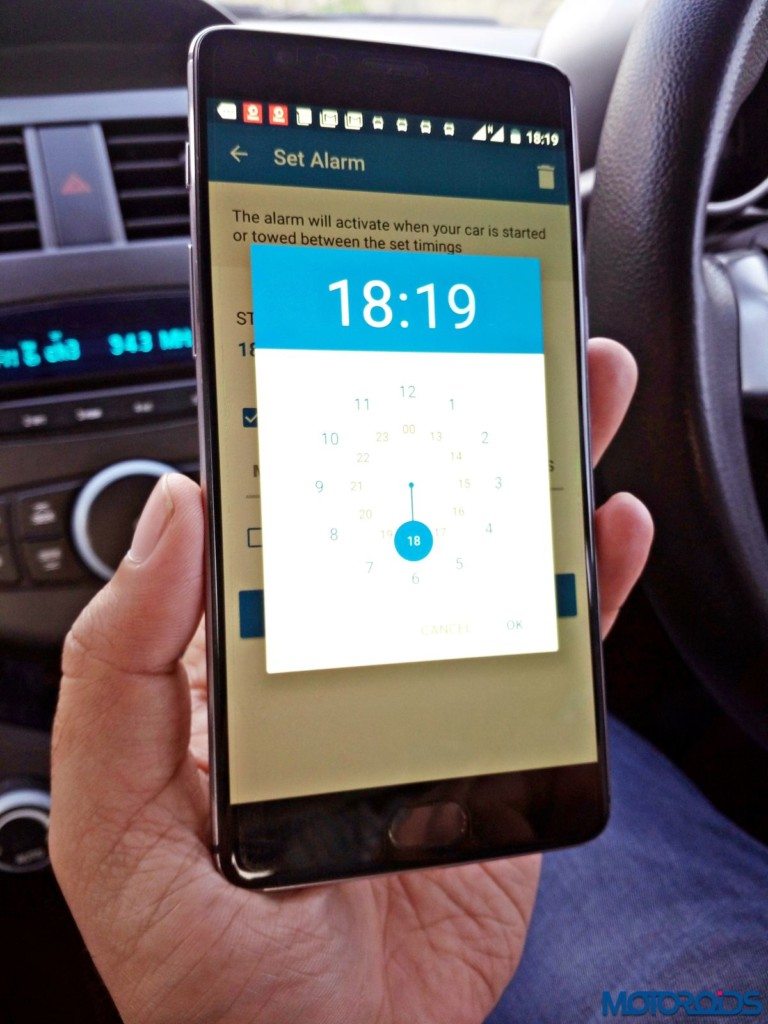 After completing our test run we went through all the data collected by the device. And the charts are as follows. 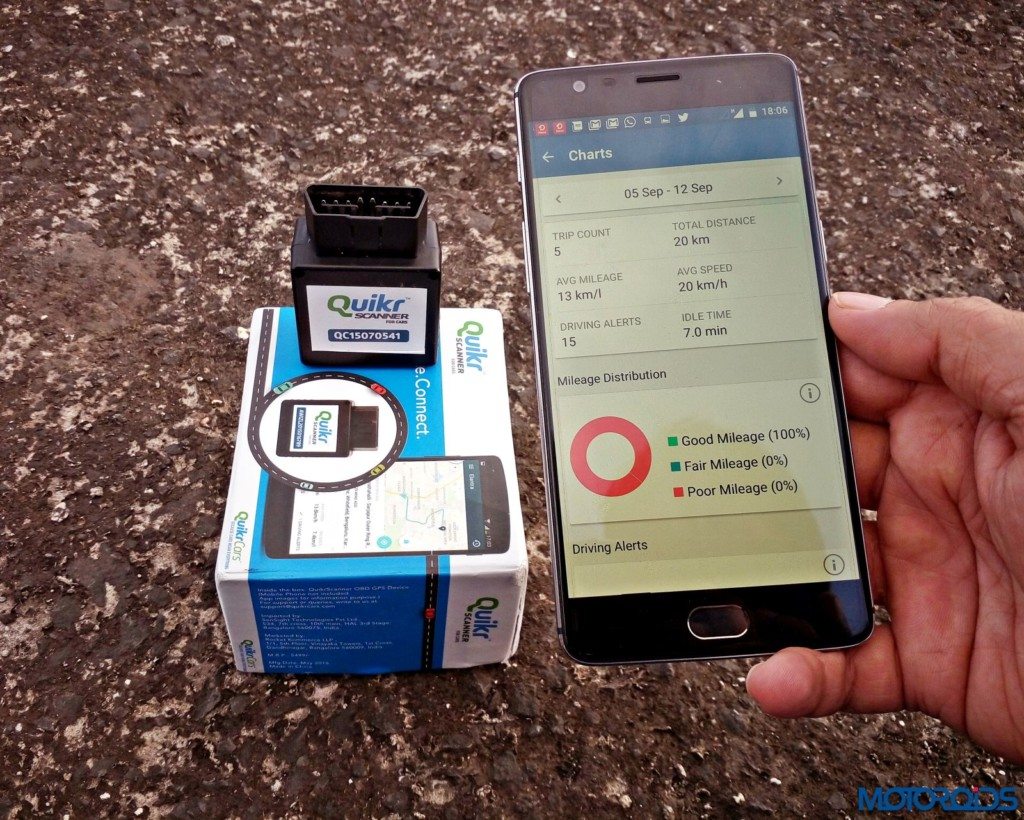 Interestingly, the app notified us about our coolant temperature, which was above ideal. This notification helped us check the coolant level in our test car, and top it up as it had not been replenished for some time. 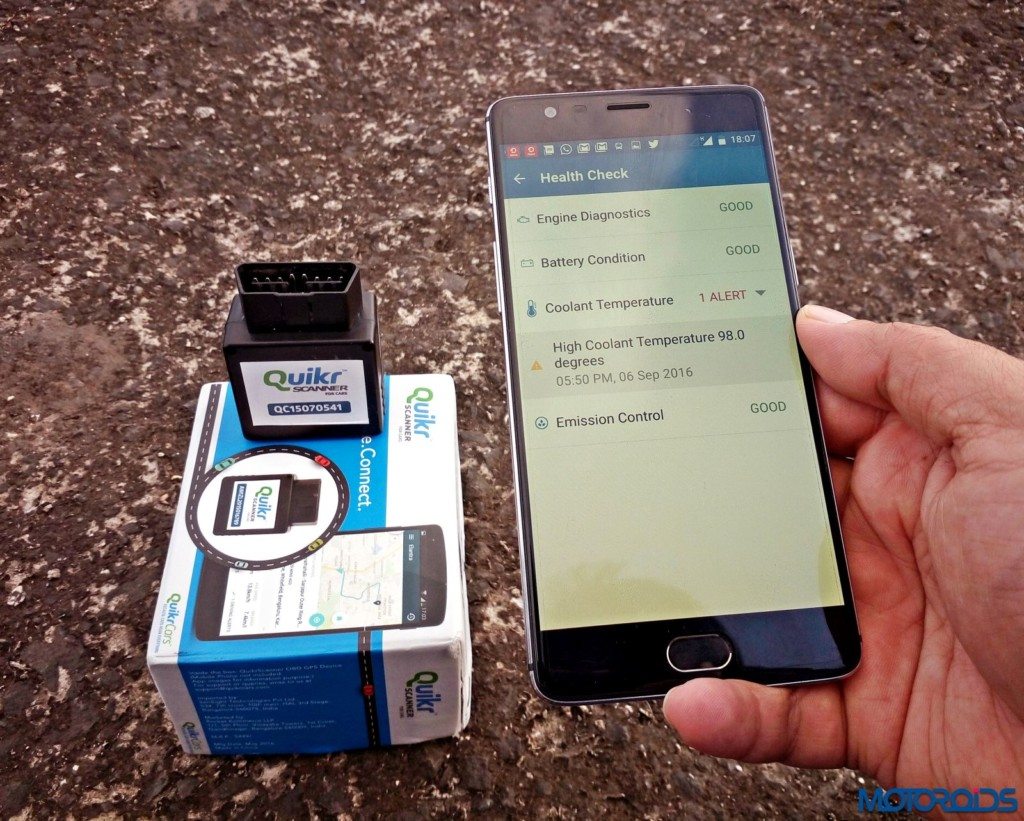 The QuikrScanner for cars is an extremely well-priced device for the kind of utility it offers. At INR 1499, this device offers you an onboard diagnostics tool, an anti-theft device, a car tracker, a tow-away notifier, a speed / acceleration / braking monitor and a fuel efficiency watchdog – all rolled into one. While it’s a great option for those who drive themselves, this device can especially be of great use for those who employ drivers. Keeping a real time track of the car’s location along with monitoring key speed parameters would act as an effective deterrent to reckless driving.

Once set up, the device is effortlessly simple to use too. For the price at which it’s being offered, there’s no reason why those who find it even remotely useful shouldn’t try it out. The QuikrScanner for Cars gets a thumbs up from Team Motoroids on all counts.

You can know more about the QuikrScanner by following this link https://www.quikr.com/cars-bikes/quikrscanner 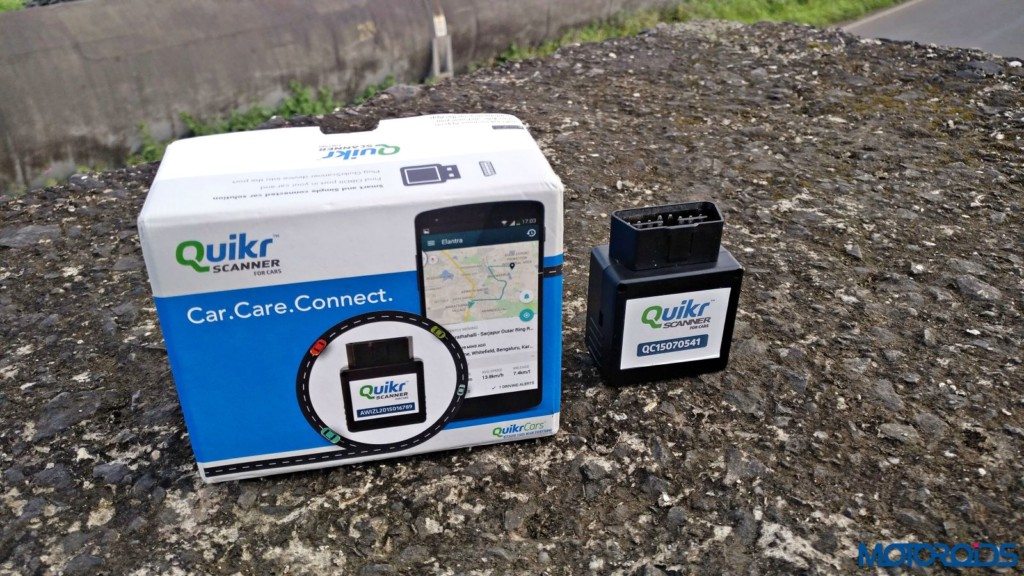