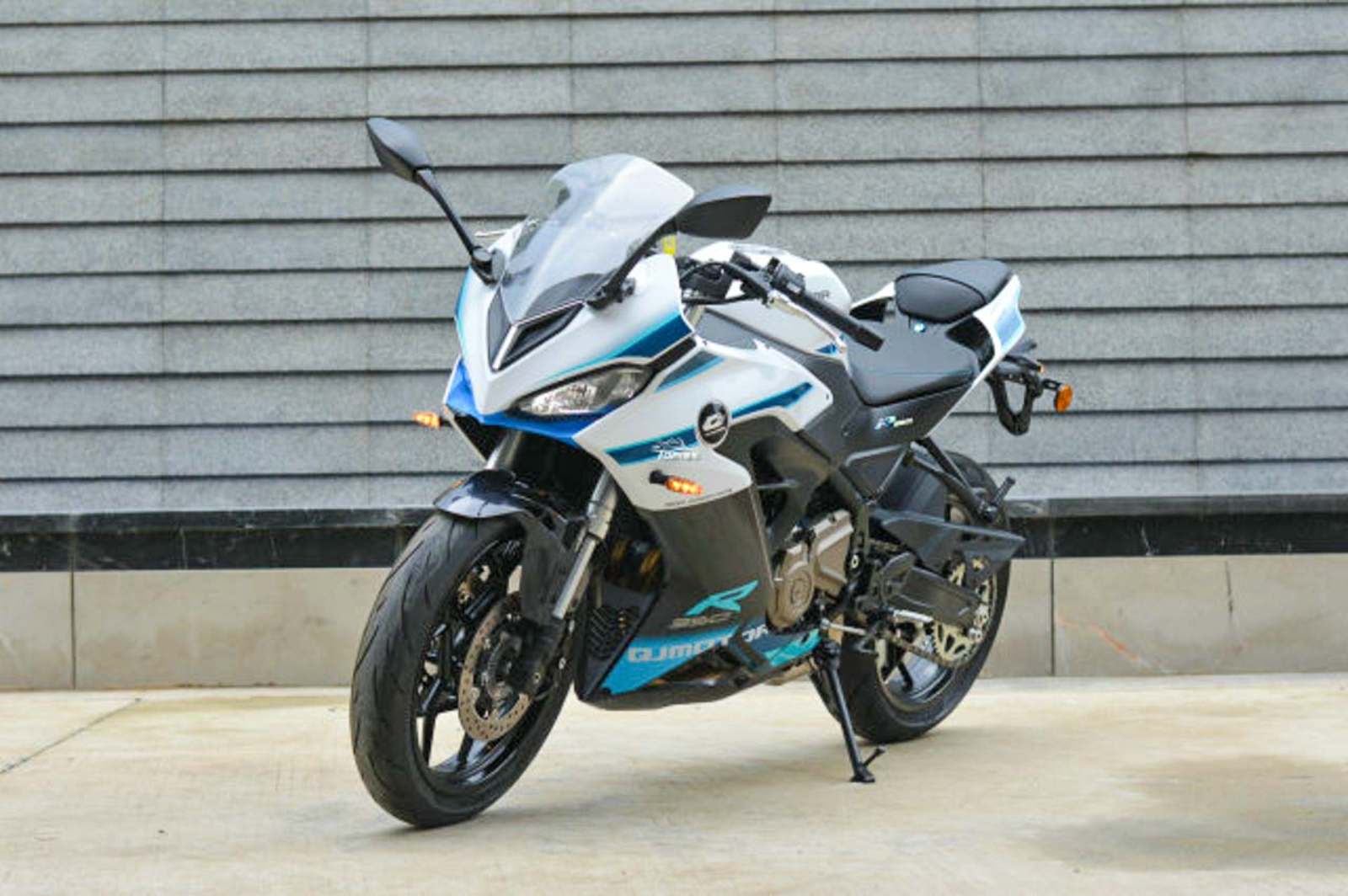 QJMotor recently showcased the Sai 350 motorcycle at the 2021 Beijing Motor Show and now, the production-spec version of the motorcycle has started reaching dealerships in its home country. Going by the images that have surfaced online, the Sai 350 has a proper big-bike appeal, similar to what we had on the Benelli 302R. QJMotor’s designing team deserve all the accolades for coming up with an original design that looks this spectacular! While other Chinese bikemakers are busy copying designs of other manufacturers, QJMotor is making sure that the Chinese automobile industry doesn’t stay maligned.

The front end of the motorcycle looks particularly smashing and looks inspired by the BMW S1000RR. Inspired, not copied, mind you! The twin-pod LED headlights is further complemented by a short visor and a vertical LED strip in between. 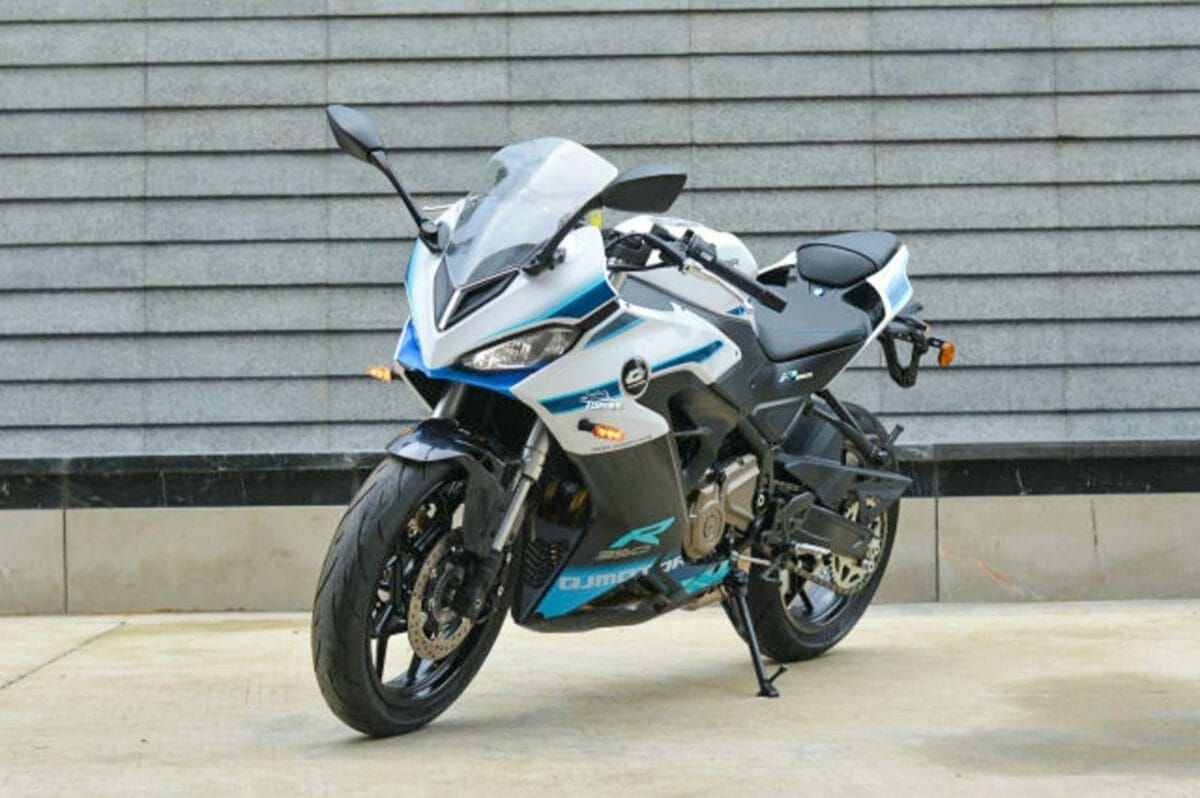 The side profile of the motorcycle looks rather busy but at the same time, not overdone. The contrasting body panels divide the fairing into distinct upper and lower sections. The tail lamp design is rather sleek and also features aerodynamic vents at both sides that will instantly remind you of the R15 V3. Overall, the styling of the motorcycle is aggressive enough to attract young buyers while its aggressive riding stance further boosted by clip-on handlebar and rear-set footpegs will also appeal to spirited riders. 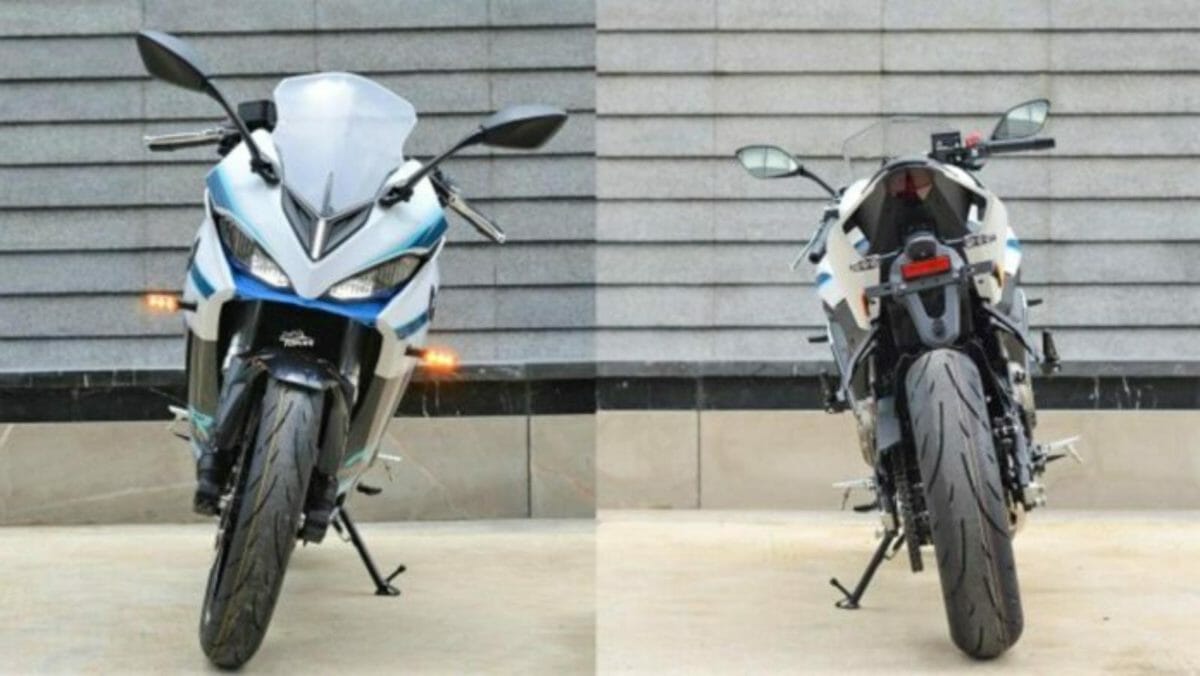 Powering the Sai 350 is a 353cc twin-cylinder motor putting out 37.5PS and 31Nm. Putting things into perspective, this is just about 3PS and 4Nm more than the TVS Apache RR 310, which is a single-cylinder motorcycle. It also misses out on ride modes that the Apache RR 310 comes equipped with. 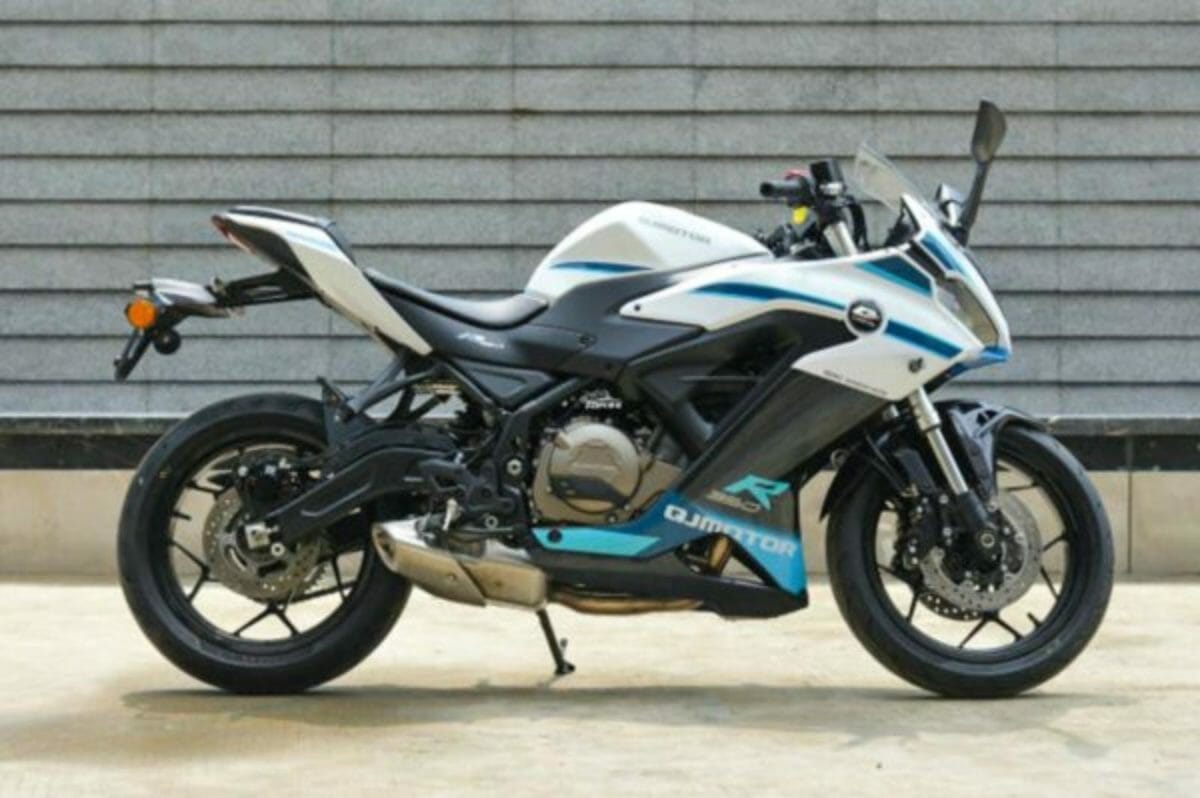 QJMotor knows very well that to exist in such a competitive space, it will have to lend its offerings with modern-day features. And the Sai 350 doesn’t disappoint in this regard as it gets all-LED lighting, a chunky USD fork, adjustable levers, backlit switchgear, a hazard light switch, and a USB charging port, all topped off by the big full-colour instrument cluster that has two light-sensing display modes, Bluetooth connectivity, and a tyre pressure display function. 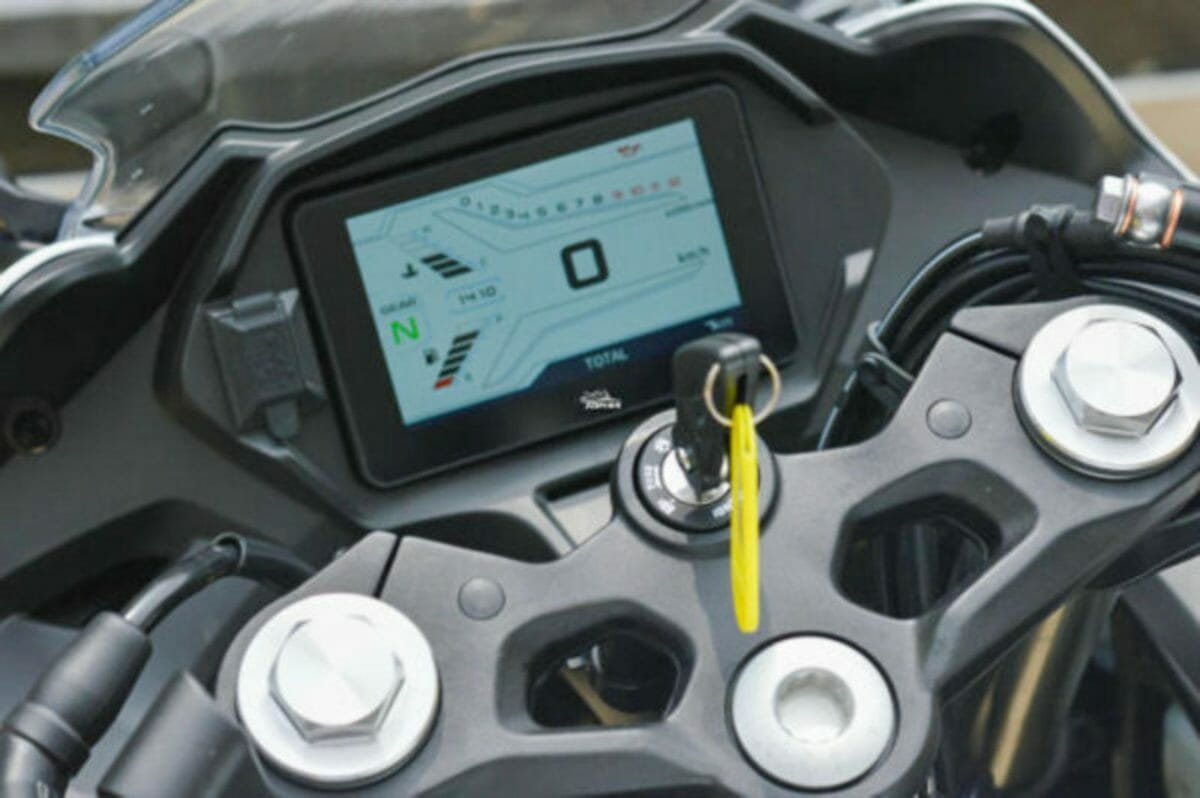 The production variant of the Sai 350 gets twin 250mm discs with axial calipers up front and a single 240mm disc at the rear. 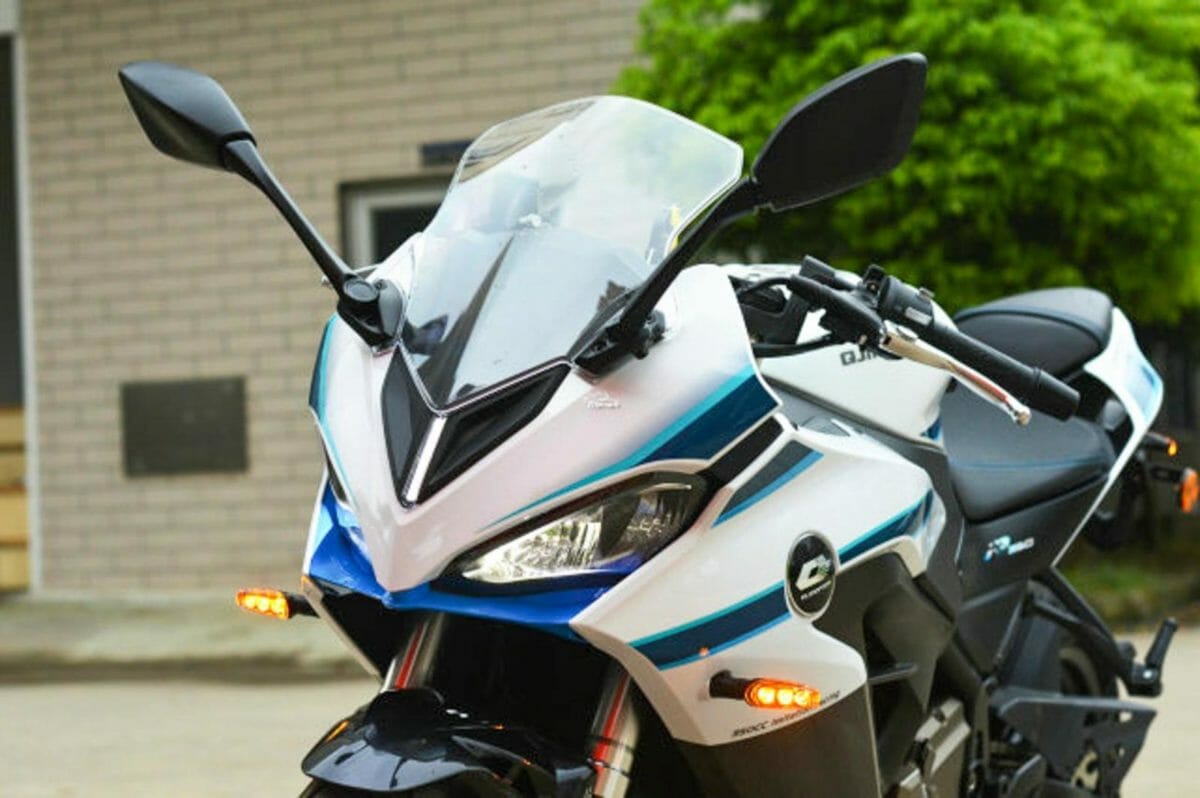 Although chances of Sai 350 making it to our shores are rather slim, it could prove to be a tough competition for the TVS Apache RR 310, KTM RC 390 and the Kawasaki Ninja 300.