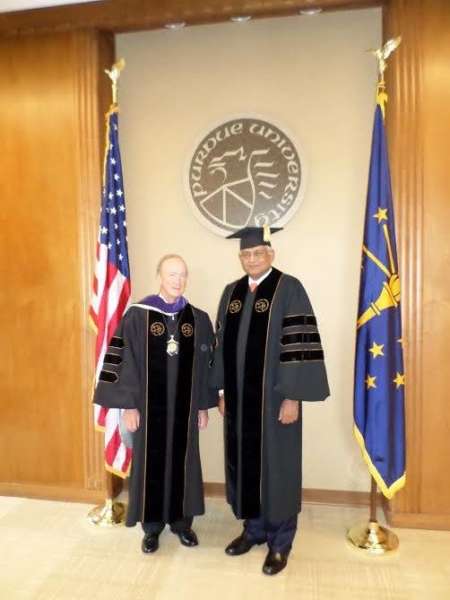 Mr. Venu Srinivasan, Chairman of TVS Motor Company, was on Saturday conferred an Honorary Doctorate of Management degree by Purdue University, USA. The honour was conferred on him during spring commencement ceremonies at Purdue’s West Lafayette campus in recognition of his contributions in the field of management. Mr. Venu Srinivasan is an engineer with a master’s degree in management from Purdue.

Speaking on the occasion, Mr. Srinivasan said, “I am humbled and deeply moved with this honour. The very fact that this recognition has come from my alma mater makes it all the more special to me. Over the years, it has been heartening to witness Purdue grow from strength to strength to become one of the top universities in the world and I am proud to be an alumnus of this glorious institution. I feel gratified to have been able to give back to Purdue by providing students with a unique study abroad experience through global internship programs which expose them to best practices within India’s manufacturing sector.”

Some of the awards conferred on Mr. Srinivasan include the prestigious Padma Shri Award for his valuable and outstanding contributions in the field of trade and industry by the president of India and the distinguished civilian honor ‘Order of Diplomatic Service Merit’ (Heung-In Medal) conferred by the president of the Republic of Korea, His Excellency Lee Myung-bak, in recognition of his valuable contribution in promoting Korea-India bilateral relations. He was bestowed the prestigious The Indian Institute of Technology, Kharagpur, the oldest IIT in India, conferred upon him “Doctor of Science”. In recognition of his contribution to manufacturing, R&D, technology and quality excellence, he was conferred a “Doctor of Science” by the University of Warwick. He received the prestigious Ishikawa-Kano award by the Asian Network of Quality, the apex body for quality in Asia, which covers 18 countries including Japan, China, India, Korea, and Thailand. Mr. Srinivasan was awarded the JRD Tata Corporate Leadership Award by the All India Management Association for his contribution to leadership and management and the Jamsetji Tata Lifetime Achievement Award by the Indian Society for Quality.

Mr. Srinivasan is the Honorary Consul General of the Republic of Korea, Chennai, India, and member of the Prime Minister’s Council in Trade and Industry. He is also a member of both the Prime Minister’s Scientific Advisory Council and the National Manufacturing Competitiveness Council. He is chairman of the National Safety Council, Government of India. He has held the position as president of the Confederation of Indian Industries (CII)

Under Mr. Srinivasan’s  leadership, Sundaram Clayton Limited and TVS Motor Company were awarded the Deming Prize by the Union of Japanese Scientists and Engineers (JUSE).