It all started in the year 2002. Setting out on a refreshing ride on my bicycle, after school hours, I was at the gate of my building, about to pedal away, when one of my dad’s many colleagues arrived at our place. He was riding something new. I had not seen that bike before. Seeing a Splendor man parking a heavy looking bike aroused my curiosity and I left the bicycle at the gate to go and inspect the new machine. 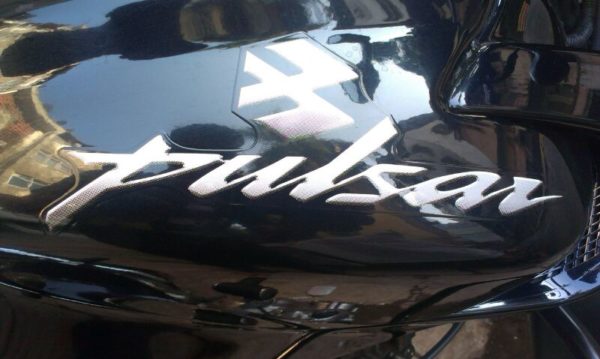 I always had a penchant for machines on wheels. At the age when my friends were learning to maneuver their tricycles, I was already zooming past them on my bicycle. When boys of my age were busy competing with each other on their bicycles, I was sneaking away with my dad’s Kinetic Honda scooter on refreshing short rides. Naturally, seeing a new motorbike within my compounds was like an adrenaline shot. As I approached, I was spellbound by its sheer size. The round headlamps, the huge fuel tank and an array of indicators on the console, including the unique side stand indicator took me on a flight of fancy. I was still admiring the bike and trying to find answers to the bobbing questions in my mind when the colleague returned, smiled and greeted me and rode away the new first generation definitely male Bajaj Pulsar. That day a love story was born. I spent my first sleepless night.

Years later, my father had upgraded his Kinetic Honda to a Hero Honda CD – Dawn. As a college student now, I was looking forward at upgrading the same to a bigger and better performing bike. I had built up a small fund, with my pocket money and meagre earning as a part time teacher at a coaching institute, that I was determined on spending on a bike that I could proudly call my own. The love story that had begun more than a decade ago still gave butterflies in my stomach. True, I had a few flings already, but now I wanted to enter into a steady relationship with the love of my life. The first generation Bajaj Pulsar that I had fallen in love with had undergone many transformations and was now also available in different variants with bigger engine capacities and better performance. There was no short listing involved in my research for the new bike and I made my way to the nearest Bajaj showroom for making an enquiry. I had my eye on the Pulsar 150 since I was a child and soon I was going to be a proud owner of the same. 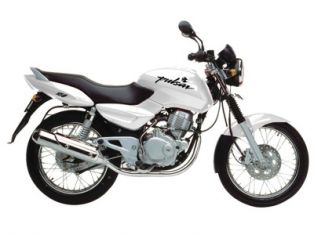 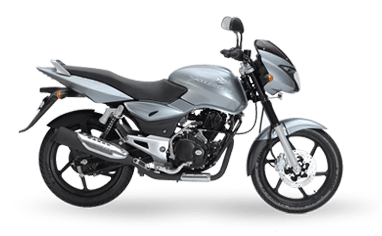 As luck would have it, I realised that I was falling short of some dough and the sales attendant was quick to suggest an easy EMI option, which I was equally quick to dismiss. I returned home with several questions in my mind and I spent another sleepless night. No amount of bargaining and pleading brought the price down and the date of my engagement with my love was nearing at an astonishingly fast rate. I wanted to bring home my first bike on 11th December, 2013. What’s so special about the date? Nothing much except that a silly idea in my mind registered the short form of the date as 11-12-13 and I did not want to miss out on it because 12-13-14 would frankly never arrive. 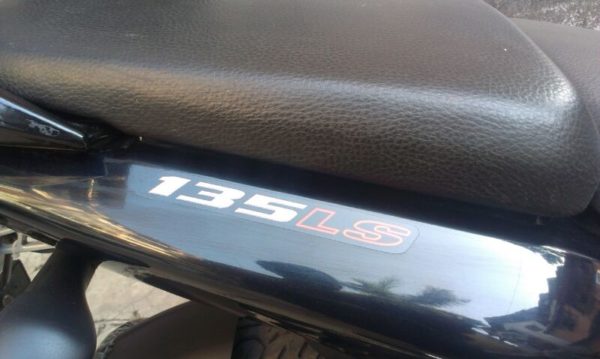 That day I realised that a bike enthusiast can never buy a bike without some research and I sat determinedly to research on my soon-to-be-first-bike. That was when I went through the detailed specifications of the younger sibling Pulsar 135 LS. I realized that there was only a measly difference of 0.5 BHP in the power of the two bikes. The 150cc variant, which I had my eye on, delivered 14 BHP @ 8500 RPM whereas the 135 LS delivered a close 13.5 BHP @ 9000 RPM. I wasn’t intending to take the bike out for racing and my sole intention was to use it for daily commuting purpose, which also brought up the issue of fuel efficiency. According to expert reviews on the internet, the 150cc engine would deliver fuel efficiency between 50 – 55 Kmpl whereas the 135 LS would overshoot and deliver between 55-60 Kmpl. Still a student and with no guarantee of a regular income, this bit of information certainly made me dig up all I could on the 135 LS. According to Bajaj, the smallest of the Pulsar lineup was the first to come with the 4-valve single cylinder technology and the engine would deliver a torque of 11.4 Nm @ 7500 RPM. Finally, the price of the bike would also fit my budget, which is precisely the reason I had started with my research, in the first place. All this took a little while to be firmly absorbed by my mind, but the fact that I was still getting myself a Pulsar finally convinced my heart too. 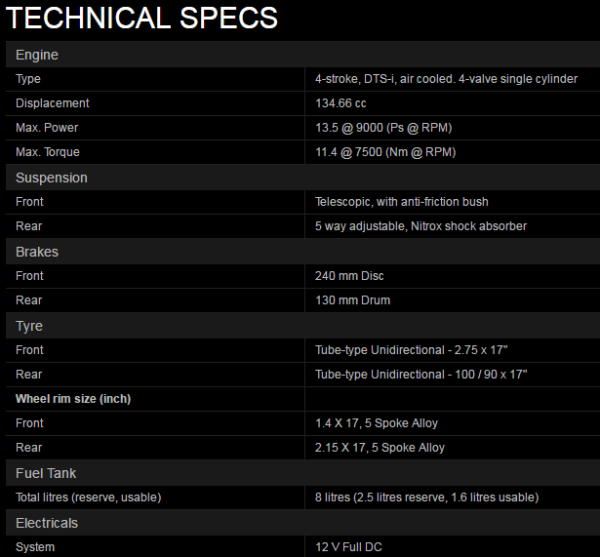 On the 8th of December, I finally booked my first bike and the sales agent promised to deliver it to me on my special date 11-12-13. Needless to say, I spent three sleepless nights again. The day dawned and I skipped college in the excitement. Finally in the afternoon, I brought home my first bike – Bajaj Pulsar 135 LS. 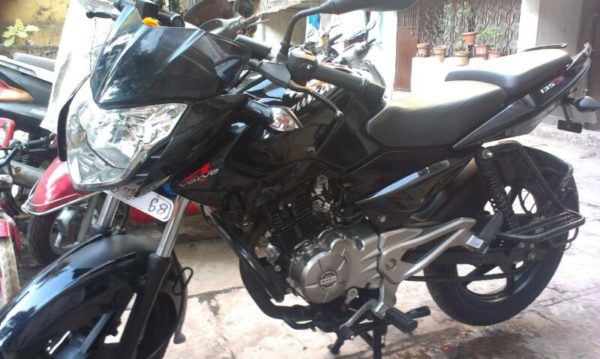 The day was spent riding the bike around and feeling the raw power threatening to explode at the mere twitch of the throttle. I confess it was more of a psychological effect than a real threat. But come on, it was my first bike, I deserved such indulgence. Flipping through the pages of the owners’ manual, I absorbed all I could. With a heavy burden on my heart I determined to adhere to the speed restrictions during the run-in period of 5000 Kms. The only solace was that I intended to use the bike daily for 70 Kms and the run-in would soon be completed. The psychological effect of the first ride did wear down a bit, but believe me, I fancied myself riding a storehouse of raw power just waiting to explode at the right time. I must also add that during the run-in period itself, at times, I did twitch the throttle a little more, just to feel that extra punch, and boy! Did I love it! 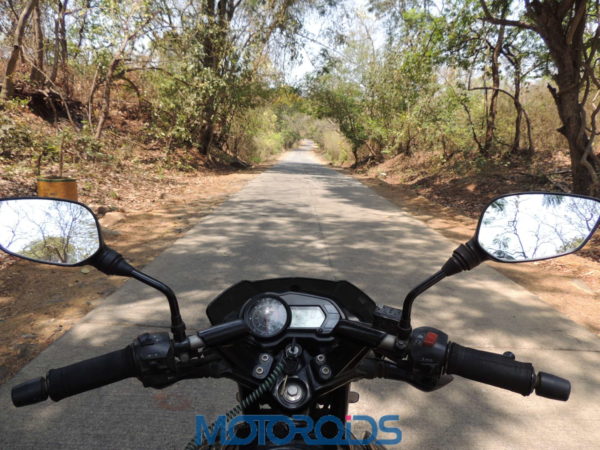 By the end of March, I had happily completed the 5,000 Km milestone and was now eager to test the bike’s performance. It zipped quickly to 80 Kmph in a matter of seconds. But the digital speedometer took a considerably longer time to show 100 Kmph from the 80 Kmph mark. I could live with that. In the stop-and-go-Mumbai-traffic, it is anyway a dream to go beyond 80 Kmph during one’s regular commute. On the few occasions when I managed to go beyond 100 Kmph on some empty stretches, I knew I had made the right choice. Coming to the stability, I find the bike quite stable on all kinds of riding conditions. Riding at a steady 75 Kmph in heavy rains too, never made me feel less confident. The TVS Eurogrip tyres that came stock with the bike held its line in all kinds of surface, even at sharp curves and some pretty good leaning angles. Now at the 35000 km mark, I am considering replacing the tyres just to be safe but I am yet to make up my mind on what I should consider for the same. 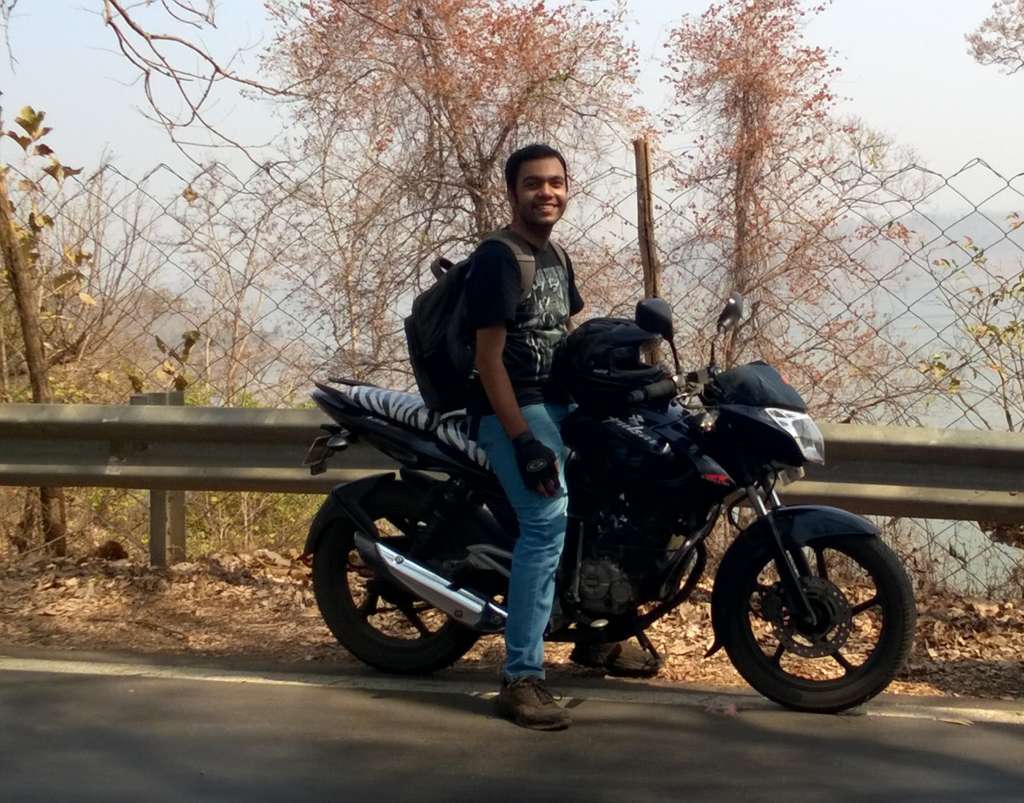 I must mention my experience with the maintenance and periodic service of the bike as well. I have religiously followed the maintenance schedule outlined by Bajaj in the owners’ manual. However, I have stopped using the recommended engine oil after the free services. I always received a fuel efficiency which was upwards of 55 Kmpl but just falling short of the 60 Kmpl mark when I used the company recommended Bajaj DTS-i 10000 engine oil, which ironically, the service centre mechanics advised replacing at every 5,000 Kms. The specified grade was 20W50 and I was looking at alternatives once my free services were done. A reputed online thread advised using the Motul 15W50 for the Pulsar 200 NS, which promised smoother drive and better fuel efficiency. Visiting the official Motul website, confirmed that the same oil was recommended for the 135 LS too. The first suggestion turned out to be Motul 7100 4T (20W50), which is the synthetic version manufactured by the company and the second option was the Motul 5100 (15W50), which is the semi synthetic version manufactured by the company for engine capacities between 100 – 150cc running in regions with a temperate climate. 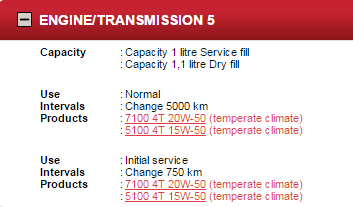 I chose the latter for my bike and believe me, the difference in refinement was immediately noticeable. I also gave up on the authorized service centres and now rely upon a certain roadside mechanic who was recommended to me by a friend who had named him as ‘Pulsar ka doctor’. His expertise in handling my questions related to the nitty grittys of the bike makes me pay him a regular visit at every 5,000 Km interval for a periodic maintenance, even if it means riding 20 Kms away to his small shop at Airoli. Today, with the combination of Motul and my trusted mechanic, my bike delivers a fuel efficiency of 65 Kmpl in city driving conditions. In the highways, it varies between 65 – 68 Kmpl with the highest being 72 Kmpl, that I received once. 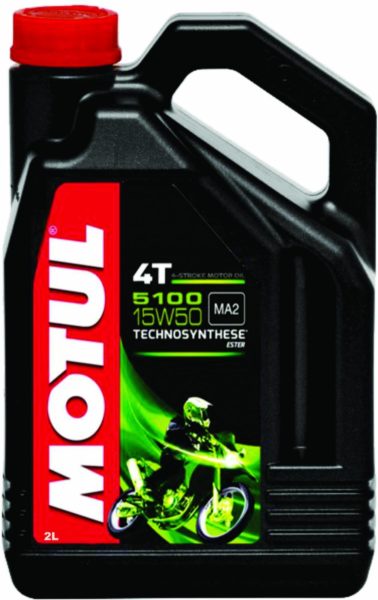 Apart from the change in my preference for the engine oil, everything else in my bike has remained in the stock condition. The oil filter and air filter are both regularly replaced – the former at the time of oil change, while the latter at the recommendation of my trusted mechanic. The thought of replacing the air filter with a K&N high performance kit did cross my mind but non availability of a dedicated filter for the 135 LS made me refrain from doing so. I do not wish to install a universal air filter as it would mean cutting through the air filter case and I want to avoid that. With the required re-jetting for best performance, it is best left untouched. At times, I do feel like replacing the stock 35/35 W halogen headlamps with a 35 W HID kit but the stock light is also pretty decent. It is only at times when I feel the need for a better light, and have therefore kept the matter pending for a time when I desperately need it. 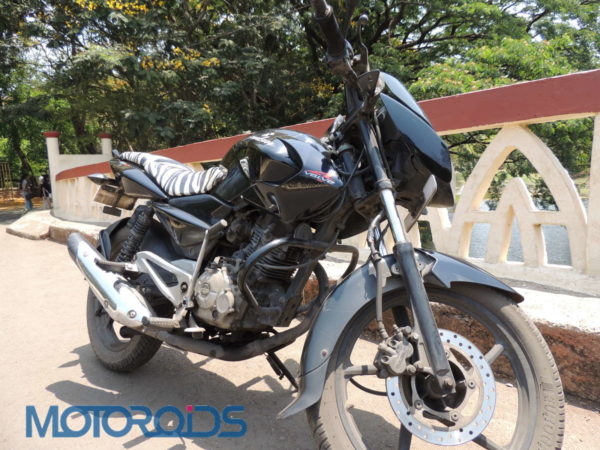 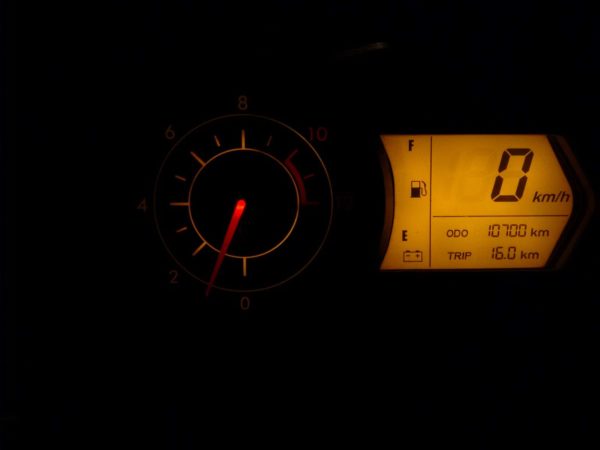 Today, after two and a half years of a steady relationship and more than 35,000 Kms of riding in all kinds of weather and road conditions, I am glad that I fell short of some cash back then. Who knows how the Pulsar 150 would have performed in the long run! My 135 LS has never given up on me and neither do I intend to give up on it anytime soon.

Send us your review : Own a car or a motorcycle? Wish to share your experience with millions of readers and help them choose better? Shoot us an email at feedback@motoroids.com with the title “User Review – Car  / Bike model” with a set of good images including some shots of the odo and other details. If it’s well written and detailed enough, we would be happy to publish it here, and share it on all our social channels.