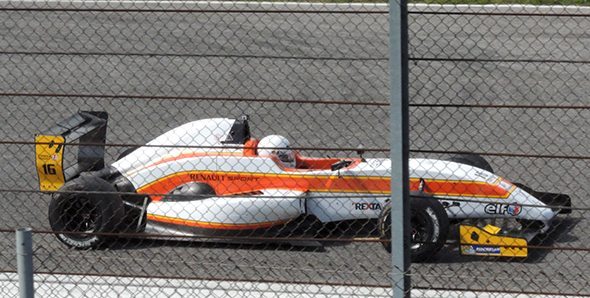 Young Indian racer Parth Ghorpade had a promising start in his Formula Renault 2.0 ALPS debut when he finished in 9th position out of a total of 36 cars in Race 1 at the opening race at Vallelunga, Italy. In Race 2, Parth had a brilliant start and moved from 16th to 7th position in the opening lap before being punted out of the race.

The Friday practice sessions, which were all hit by heavy rain, saw Parth finishing in 24th and 19th positions. This also meant that Parth went into qualifying with limited dry running time. Qualifying is split into two groups since the grid has 36 cars on it. Parth put in a fantastic lap to go 4th fastest in his group and would start 8th on the grid for Race 1, just half a second of the pole-sitter in his very first qualifying session.

In Race 1, Parth had a bad start and slipped to 11th place. He managed to pull off two great overtaking moves and ended up finishing in 9th position. His lap times were close to the leader but with the field so closely bunched together, 9th position was the best he could do. He started Race 2 in 16th position and had ones of the best opening laps of his career to move up 9 places to 7th position. On lap 2 Parth was hit from behind and ended up in the gravel forcing him to retire.

Parth was confident of a better showing in the coming races after a good start to the season. He commented, “We always knew this was going to be a very competitive series so to qualify 4th in the group in our first qualifying session exceeded all expectations. I had a slow start and lost some positions at the start. After that I started pushing and managed to overtake 2 cars and move up to 9th place. I was quicker than some of the guys ahead of me but could not overtake due to the characteristics of the circuit. In Race 2, I probably had the best start of my racing career and was up to 7th position from 16th and the car felt really good. On lap 2 I suddenly felt a hit from behind and was punted into the gravel. Overall I am satisfied with the opening race. You have 25 cars within 1 second of each other so it is easily the most competitive field I have even raced in. We will test again before the race next month. I am looking forward to the rest of the season and confident for the same.” added Parth. The Formula Renault 2.0 ALPS, powered by the Clio III Renault Sport engine, has a paddle-operated 7-speed sequential gearbox, with 250bhp and push rod suspension.