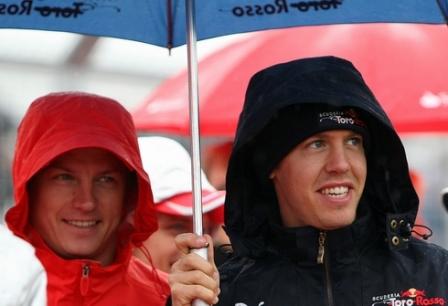 Sebastian Vettel’s career seems to be following that of Kimi Raikkonen. Both entered Formula 1 relatively early, with very little racing experience. Both started with back marker teams and shifted to a front running team in only their second year. Both were instantly recognized as super talented and were a threat to their more experienced team-mates from the very beginning. Both drove cars designed by Adrian Newey. Both have lost races because of their cars’ fragility and both have been accused of over-driving the car to its limits. Of course, Kimi limits showing-off his sense of humour to his circle of friends, while Vettel loves the camera.

I hope that Vettel doesn’t inherit Raikkonen’s consistent bad luck and lose this championship purely because of his car. Luckily for him, no single team or driver yet has a clearly unbeatable package, and he can still bounce back from the first two races. But Red Bull have to work hard to figure out if it really was their car, or just a case of bad luck for someone so unforgiving on his machinery. 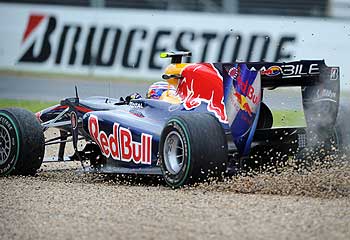 Mark Webber had a few off-track incidents in Australia. He also blew it at the start with wheel spin losing him several places. He drove a much better race than in Bahrain, but got it all wrong in the last few laps. Hamilton lined up Alonso for a move, then realised he wasn’t close enough and they were already into the corner. Webber forgot to brake as Hamilton abandoned his move and there was nowhere else to go. Luckily for him, Hamilton was able to limp to the finish. He ended up with a reprimand from the stewards and of course lost some valuable championship points.

Mark Webber’s below-par performances have again ignited the theories about Kimi coming back to partner Vettel. As attractive as that sounds, Red Bull will no longer be able to attract top drivers if they cannot deliver a reliable car before the end of the season. Their B-team, Torro Rosso will be harder to explain to their Board as a good investment, if all the awesome young talents it throws out keep ending up on the gravel with car failure.