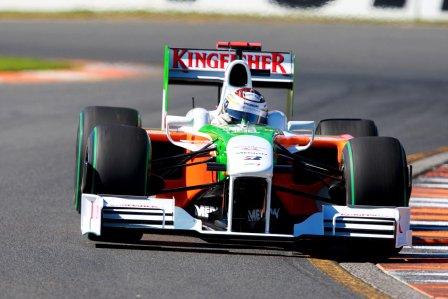 After a decent show in the opening round of the season at the Bahrain International Circuit, Force India was ever determined to make its grade into points in Melbourne’s Albert Park. The practice sessions again were impressive and Vijay Mallya’s team were indeed good when the proving point was – speed. Paul di Resta, Force India’s third driver, took part in a Formula One race meeting for the first time. He took the place of regular driver Adrian Sutil during the first free practice session. Another bold step from Mallya, proving a point when it comes to nurturing younger talent!

In the race, Adrian Sutil of Germany started in the tenth position and his Italian partner Vitantonio Liuzzi started in the thirteenth place. This was for the second consecutive time that Sutil qualified in top ten on the race grid.

Rain played a spoilsport and the race was declared wet before the start. Thus tyre changes were very much predictable. New strategies came into picture. The first lap saw a tangle between Jenson Button and Fernando Alonso at the first corner, with Michael Schumacher caught up in the incident and damaging his front wing. Alonso was turned around and rejoined at the tail end. Thus, the race more dramatic than expected and ‘entertaining’ as the fans like it.

For Force India, however, consistency is well immersed in the blood now. Sutil had a good start but couldn’t capitalize much on his start and had to retire with engine problems. This meant that though the garage was shocked, they had to shift focus on the lone Liuzzi. Liuzzi cherished his position in the team and the faith shown by the team staff. He drove with gallant pace and put up few good lap timings. Liuzzi finished in a creditable seventh place.

Vijay Mallya was pretty happy with the overall performance. He said the team is working well and the aerodynamic performance is equally supporting the powerful engine. He was disheartened that Sutil couldn’t finish the race due to an engine failure but is ever confident that the German shall fight and come back strongly in Sepang. Sutil has been doing pleasantly well during the practice and qualifying sessions. However, his fortunes are not favoring him during the race.

For his team-mate however it’s the vice-versa. With Liuzzi, finishing in points for second consecutive time, his boss was all praise for him. Engine problem for Sutil is definitely a matter of concern for the team but at the same time his consistency in making to Q3 of qualifying and finishing in points in two out of two races is a great stream of motivation for the entire team. Force India is determined to move a step ahead in Sepang and if reliability goes hand in hand with consistency then sky is the limit for this team.