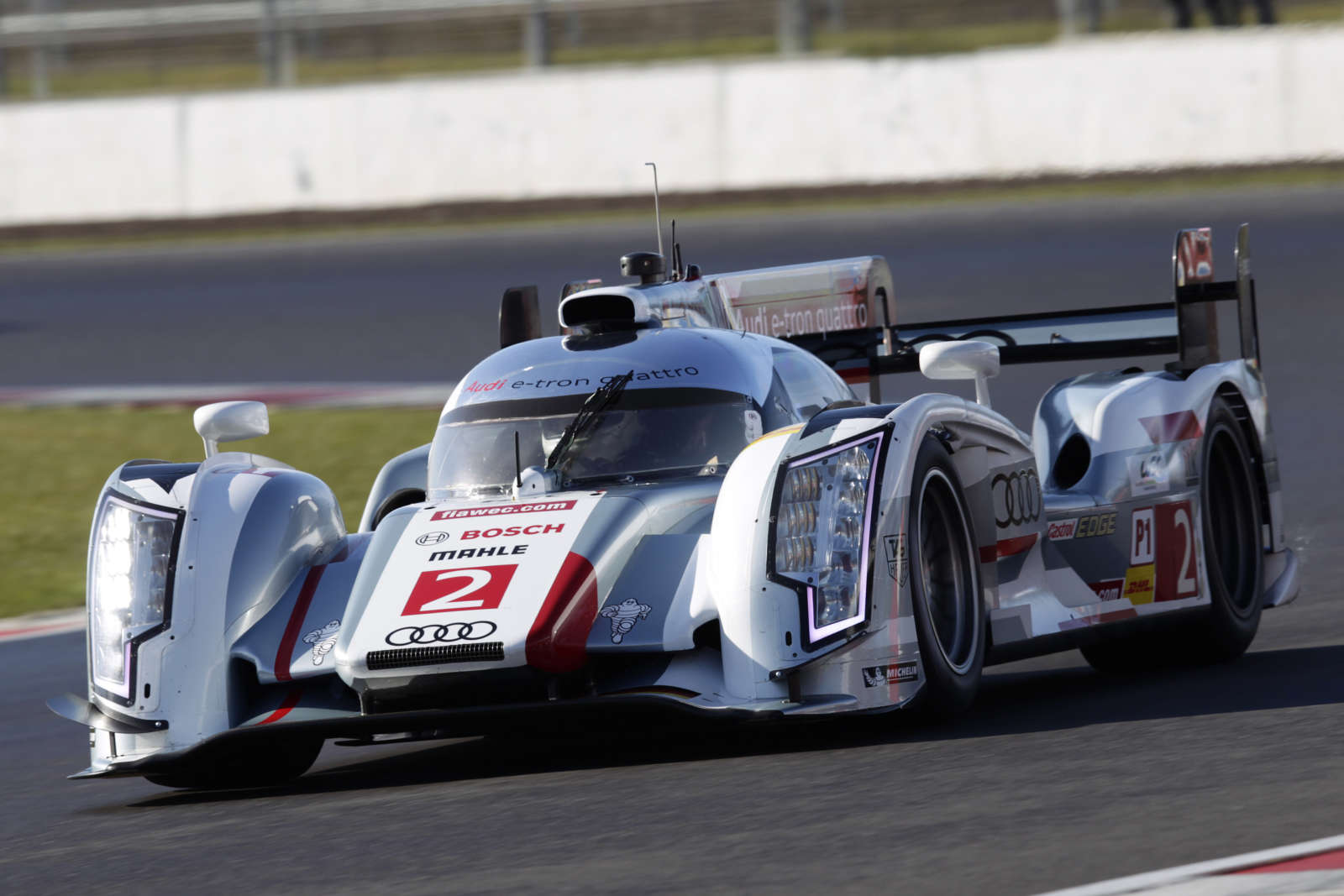 For the first time, Audi won the famous RAC Tourist Trophy. The tradition-steeped trophy that has been awarded since 1905, was the main prize for the 2013 WEC opening event. The Scotsman Allan McNish (GB) was pleased to win this important motorsport trophy at his “home” round. Together with Tom Kristensen (DK) he was on the grid for the first time with his new team-mate Loïc Duval (F). The trio is now leading the WEC drivers’ standings with a seven-point advantage. In the fifth hour of the race, after 151 laps, they took the lead. Despite an excursion while lapping another car and an additional tire change McNish went on to recover the lead and crossed the finish line with a 3.4-second advantage.

From the start, a thrilling battle had ensued with challenger Toyota. Allan McNish in the number 2 Audi grabbed the lead for the first time on the sixth lap. The sister car – number 1 – driven by Marcel Fässler/André Lotterer/Benoît Tréluyer (CH/D/F) completed Audi’s one-two lead at an early stage. On lap 77, the Swiss fought his way forward to the very front. A defect on the left front driveshaft after four hours of racing though meant that the hybrid system of car number 1 was no longer able to deliver its power to the front wheels. With that, the current World Champions had to admit defeat.

In the technologically challenging battle of the best hybrid sports cars Audi – like last year – achieved victory in front of Toyota at Silverstone. The two R18 e-tron quattro cars had been set up for particularly high aerodynamic downforce. The smaller air restrictor prescribed by the regulations this year was to reduce the output of Audi’s LMP sports cars.

The engineers from Audi Sport worked on compensating for this disadvantage, which also included a power-oriented engine development. Furthermore, the 58-liter fuel tank capacity of the diesel hybrid sports car being around 20 percent smaller than that of the gasoline engine sports car of competitor Toyota resulted in shorter refueling intervals for Audi. Despite an additional refueling stop Audi managed to win with a one-lap advantage in front of the best Toyota finishing in third place.

In just three weeks from now, the next competition is on the agenda. At Spa-Francorchamps, on May 4, Audi is fielding three R18 e-tron quattro cars in the race for the first time this year in preparation for the Le Mans 24 Hours. 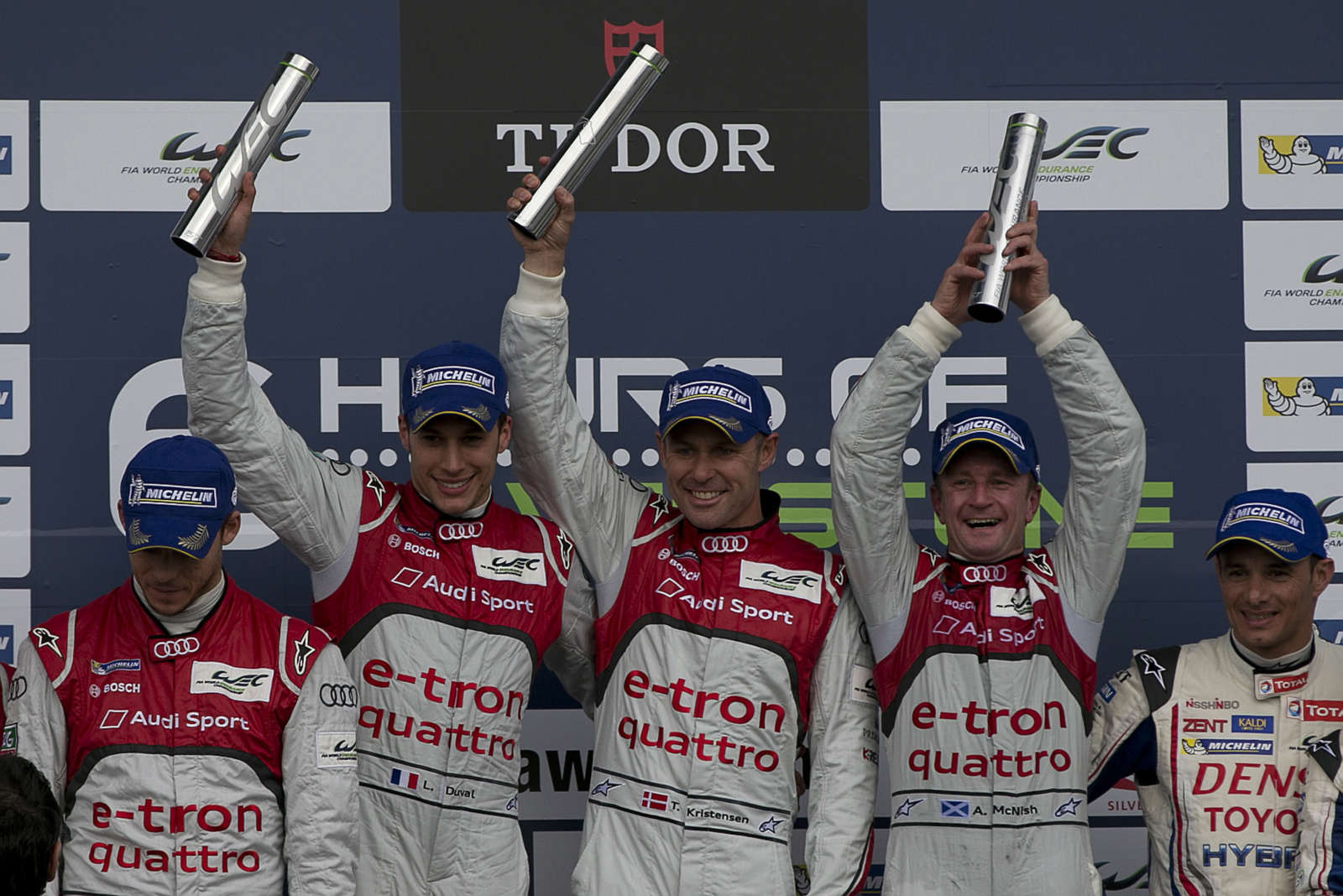 Commenting on the success, Dr. Wolfgang Ullrich (Head of Audi Motorsport) said,“It’s very nice to be able to finish the first WEC race in 2013 with a one-two victory. From the beginning to the end, we showed a consistently good performance. Both cars were running on different strategies and it was thrilling through to the end. Although car number 1 was ultimately handicapped the lap times were very strong. A duel of the kind fought between Allan McNish and Benoît Tréluyer is unrivaled in motorsport. That proves that our drivers are free to battle on track. But they also know that they’re driving for the Audi brand and they impressively showed that.”

Ralf Jüttner (Technical Director Audi Sport Team Joest) said,“A great day for Audi, for our team and for the spectators. Our pit stop intervals were shorter than Toyota’s but we compensated for that with a faster race pace. The drivers did everything right and the pit stops were superb. Allan McNish set an exclamation mark in the end and went on to win a race that was almost believed to be lost. The other driver pairing accepted the result in true sporting spirit. That was a nice start into the season.”

Tom Kristensen (Audi R18 e-tron quattro #2) said,“A nice race in which we clearly showed how we increased our pace in the winter. Toyota’s performance deserves respect as well. We’ve seen a thrilling battle in which Allan McNish recovered despite a spin. And Loïc Duval experienced a very nice debut in our driver squad.”

Allan McNish (Audi R18 e-tron quattro #2) said,“We knew it would be a difficult race. The competition with Toyota was tough, plus there was a thrilling duel between both Audi cars. In the end, it became a battle between Benoît Tréluyer and me. After I spun, I went for maximum attack on new tires. I managed to move to the front only on the penultimate lap. I’m happy about having scored the maximum number of points at the WEC opener for the second consecutive time.”

Marcel Fässler (Audi R18 e-tron quattro #1) said,“An extremely thrilling race. Allan McNish was running on new tires toward the end while our tires had already run for many kilometers. Congratulations to the drivers of car number 2. It was a great race for both cars and a nice one-two victory for Audi in the battle with Toyota.”

André Lotterer (Audi R18 e-tron quattro #1) said,“It was an open battle up to the end. For us, the race lasted two minutes too long… But it was a great result for Audi. For the Championship, the starting base is perfect even though we’d have liked to have been one step higher. We can be pleased nonetheless.”