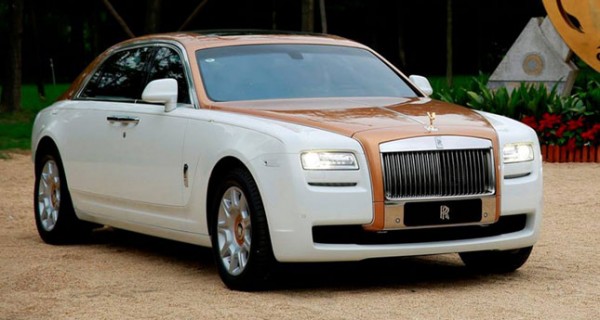 Soon after unveiling the one-off Phantom Celestial edition at the ongoing Frankfurt Motor Show, BMW owned British ultra luxury car maker Rolls Royce has come up with another unique model. Based on the its Ghost, the new Rolls Royce Ghost Chengdu Golden Sunbird takes design inspiration from a Chinese artifact from the late Shang Dynasty, which is known as the Golden Sun Bird and was discovered in 2001 in Chengdu city.

The new Rolls Royce Ghost Chengdu Golden Sunbird Edition is based on the LWB model and comes with a handful of motifs that are inspired from the ancient ring-shaped piece foil.

Other than this, the bespoke Ghost also comes draped in a golden paint shade that can be found on the bonnet, roof and boot lid. Also unique is the golden upholstery and golden treadplates. There also are good chances that the car’s Spirit of Ecstasy too is made of pure gold.

The identity of the customer who commissioned this bespoke Ghost has been kept under covers but it doesn’t take a genius guess that this car is headed to China.