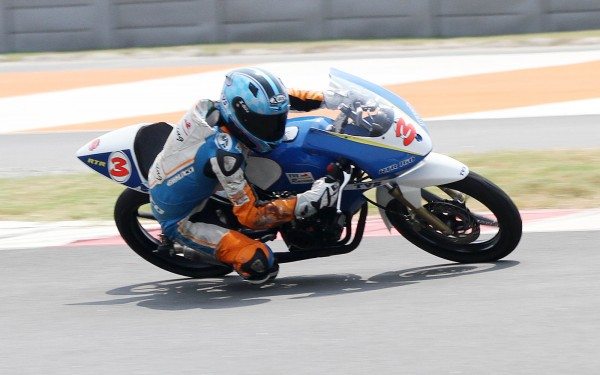 Round 3 of the 2013 FMSCI-MMSC Indian National Motorcycle Racing Championship kicked off at the Buddh International Circuit today with 4 races taking place. The highlight of the day was the wheel-to-wheel battle between India’s top two riders Sarath Kumar & K Rajini Krishnan in the Honda CBR 250 category. Rajini got past Sarath on the final corner in the final lap to take the win by 0.0157 seconds.

The MMSC INMRC created history by becoming the first ever competitive bike championship to race at the BIC and included leading motorcycle manufacturers Honda, Yamaha & TVS participating this weekend.

First race of the day saw the TVS-Apache RTR180 in action and Mathana Kumar took the honours with a convincing win. He was followed across the finish line by Ananth P Raj, who finished 5.898 seconds behind. The battle for third went down to the wire with a three-way-battle between Arvind Ganesh, SK Prakash and Alwyn Jebaz. Arvind came out in front to take the final step of the podium. 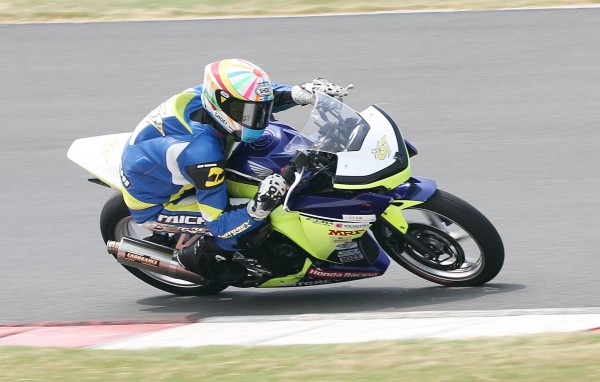 The second race of the day, the Yamaha-Y2F R15, provided some more nail biting action with Shyam Shankar and Vivek Pillai trading placed all through the race. Shyam and Vivek came out of the last corner side-by-side with Shyam just edging ahead as they crossed the finish line 0.083 seconds ahead.

The action resumed with the CBR 250R with India’s two top riders Sarath Kumar & Rajini Krishnan going head-to-head once again. Last time out in Chennai both collided and it looked like it might happen again but both riders put on a scintillating performance to show their class. Sarath, who started on pole, led off the line followed by Abhishek V and Rajini. Rajini soon passed Abhishek and had a race long battle with Sarath. At the start of the last lap it looked like Sarath had done enough but Rajini came hard at him and they were side-by-side coming into the fast corner. Rajini dived down the inside of Sarath and made the move stick and crossed the line in first place ahead of Sarath. Abhishek V finished in the third place.

The last race of the day saw the NRC Experts 165cc take to the track. K Jagan took a victory ahead of Harry Sylvester and Deepak R. Jagan started well and led from start to finish easily. Harry and Deepak behind him battled each other the whole race with almost nothing between them.