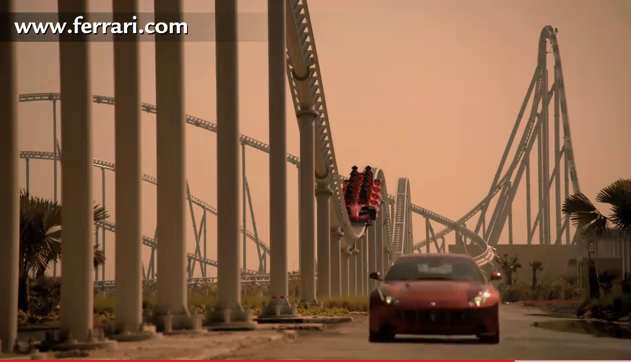 It’s been some time since the Ferrari FF (or the Ferrari Four) made its first appearance. The pictures revealed most of the new car’s unwieldiness right from the beginning. And that’s a good thing, as we got to absorb all the ungainliness in one shot and learnt how to live with it. Had the Italian carmaker taken the route of exposing us to the tragedy more slowly, it would have been like prolonged torture. A look at the video in question here gives us some food for thought though.

Ferrari has now revealed a full blown promotional video of the car, depicting it in motion from all the angles and through a variety of terrains. The Ferrari FF is seen grappling for traction through snow, sliding through sand and clinging on to slippery tar in the rain. The car travels through a variety of landscapes and weather conditions to finally reach Ferrari’s theme park in Abu Dhabi where it drives along the park’s famed roller coaster. The video clearly focuses on depicting the all-weather, all-terrain capabilities of the new car, and projects it more like a tough SUV than an agile track tool.

In most parts, especially in places where the rear end of the car is visible, the FF looks more like a hot hatch or a crossover than an exotic supercar. And with its new AWD, that’s where Ferrari may just want to position it. The Italian carmaker seem to have taken a safer route to test the SUV territory with the FF. ‘It’s not an out an out off-roader, but it has the capability to tackle adversities with aplomb if thrown in its way’ seems to be the theme behind the new machine.

In that light, the new car somehow doesn’t look as ugly as it did earlier. It’s spacious from inside, and it’s meant to do things no other Ferrari has dared to do earlier. Is this the first step towards Ferrari doing a Cayenne – we’re afraid it just may be.