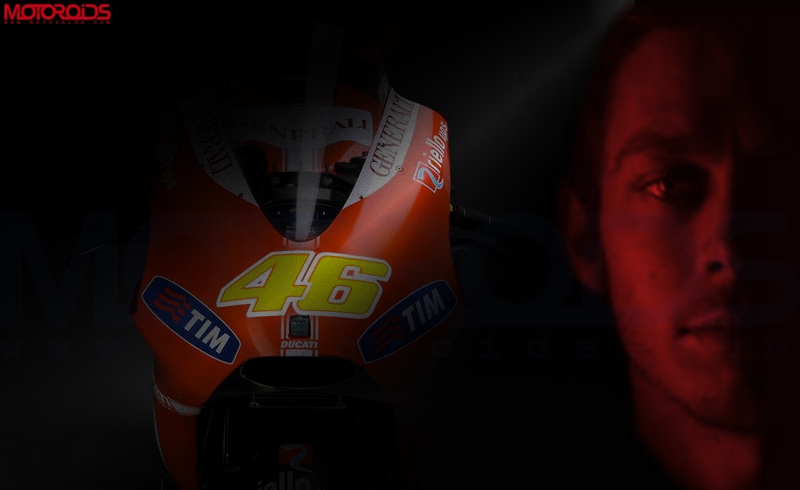 The worst kept secret of the 2010 MotoGP season is finally official – Valentino Rossi has made a switch from Yamaha to Ducati for the 2011 season! Yes, every Italian’s wet dream has finally come true. As was reported earlier, Rossi made his final announcement today, a few hours after the grand prix of Brno. The Italian rider and the Italian team have signed a two year contract, meaning your favorite motorcycle racer will continue to entertain and thrill you for two more season at least.

“We are delighted to announce that Valentino Rossi will be with us from 2011,” commented Gabriele Del Torchio, president of Ducati Motor Holding. “He is a paragon of excellence in the world of motorcycling, coherent with our Italian company which is a standard bearer for ‘made in Italy’ excellence. These are key values for success in technology, design and sportsmanship. In addition to the strong and passionate intent of both parties, this agreement has been made possible by the committed support of our shareholder Investindustrial and all the sponsors associated with the Ducati Team, sponsors which have believed in this opportunity and share and support our choices.”

Filippo Preziosi, Ducati Corse General Director, said, “Firstly, Valentino is a great fan of motorcycles and so it has always been a pleasure for me to listen to his opinions. Until the Valencia GP he will remain a competitor, one so great that he has always given a special value to our victories, but as soon as he rides the Ducati for the first time we will work together on every single detail that will develop a bike capable of showing his huge talent. Working with Valentino is one of the most exciting things for every engineer, and it’s good to know we will have this great opportunity next season.”

It is more than a festive environment for Ducati and alomost every Italian motorcycle/racing fan, however, Rossi, Yamaha or Ducati haven’t said a word about the future of Rossi’s crew. If Rossi’s Honda to Yamaha switch in 2003 is anything to go by, then Jerry Burgees and the entire crew would follow Rossi to Ducati, since the latter has confirmed that Casey Stoner’s crew won’t be of any service once the Australian packs his bags for Repsol Honda next season. The same team that developed the YZR-M1 in the last seven years with Rossi at the helm might well be the team that will make the GP11 the best machine on the grid when Rossi begins testing for Ducati as early as the final round at Valencia this year.

Valentino Rossi’s “love letter” (in Italian) for the Yamaha YZR-M1 after he announced his departure to Ducati for 2011. Click on the image for a larger view. Image Source: https://motogpworld.net

A highly emotional Rossi wrote the letter shown above, which translates as, “It is very difficult to explain in just a few words what my relationship with Yamaha has been in these past seven years. Many things have changed since that far-off time in 2004, but especially ‘she’, my M1, has changed.

At that time (2003) she was a poor middle-grid position MotoGP bike, derided by most of the riders and the MotoGP workers. Now, after having helped her to grow and improve, you can see her smiling in her garage, courted and admired, treated as the ‘top of the class’. The list of the people that made this transformation possible is very long, but I would like to thank anyway Masao Furusawa, Masahiko Nakajima and ‘my’ Hiroya Atsumi, as representatives of all the engineers that worked hard to change the face of our M1.

Then Jeremy Burgess and all my guys in the garage, who took care of her with love on all the tracks of the world and also all the men and women that have worked in the Yamaha team during these years. Now the moment has come to look for new challenges; my work here at Yamaha is finished.

Unfortunately even the most beautiful love stories finish, but they leave a lot of wonderful memories, like when my M1 and I kissed for the first time on the grass at Welkom, when she looked straight in my eyes and told me ‘I love you!'”

Until Le Mans this year, it seemed pretty unrealistic that Rossi would make a switch from Yamaha to some other team on the grid. In fact, the Italian also expressed his desire to continue with Yamaha till he concluded his premiere motorcycle racing career. However things might have taken a different turn when issues, both money and ego related, emerged between Rossi and Lorenzo within the Yamaha camp. Yamaha though has taken Rossi’s decision in a sporting manner.

A statement from Yamaha reads, “Valentino has played a huge part in the history of Yamaha and he will always remain an important part of Yamaha’s heritage. Yamaha is extremely grateful for Valentino’s contributions to its racing successes over the past seven years and it would like to wish him the very best in his future racing endeavours. Yamaha will be putting all its efforts into ensuring a successful and happy end to the partnership over the remaining races.”

Lin Jarvis, Managing Director of Yamaha Motor Racing, said, “On behalf of the Yamaha Motor Group, I would like to express our sincere gratitude for the amazing seven years that we have spent together. Valentino joined Yamaha in 2004 at a moment when Yamaha was struggling in road racing after eleven seasons without a championship victory. Valentino’s victory at his first GP race for Yamaha in South Africa in 2004 was an incredible moment and was just the first of many more race wins that have thrilled MotoGP fans and Yamaha fans around the world. His unsurpassed skills as a racer and a development rider enabled him to win four MotoGP world titles to date with us and helped Yamaha develop the YZR-M1 into the ‘the bike of reference’ for the MotoGP class. There have been so many wonderful experiences and victories and we are very proud to have been able to make history together. Whilst we regret Vale’s decision to move on, at the same time we f fully respect his decision to search for a new challenge and we wish him the very best for 2011 and beyond. For the remaining eight races of 2010 Valentino will remain a Yamaha Factory rider. As such he will continue to benefit from our full support and we hope and expect to see some more race wins with him ‘in blue’ before the season is over.”