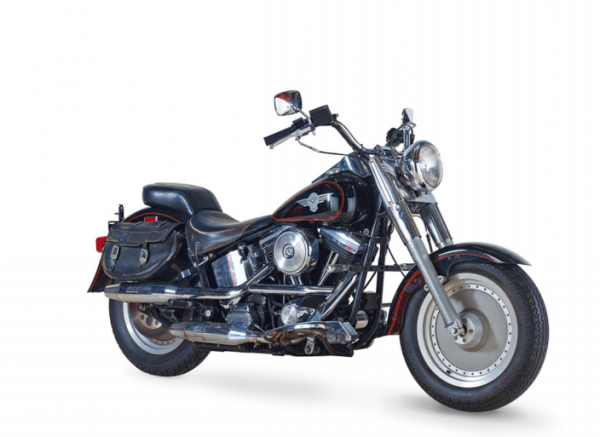 The Harley-Davidson Museum’s newest display opens April 10 and features its recently acquired “T2” motorcycle used throughout Terminator 2: Judgment Day. This is one of the few surviving 1990 Harley-Davidson Fat Boy motorcycles ridden by Arnold Schwarzenegger during the filming, and the Museum is putting it on display with other items from the movie.

“The ‘T2’ motorcycle is a great addition to our collection, and it signifies one of the most important film roles our product has played in pop culture history,” said Bill Davidson, vice president of the Harley-Davidson Museum. “We are excited to put the motorcycle on display for visitors to see, and for some, take them back to 1991 and a time when this iconic film ruled the box office.”

The 1990 Fat Boy motorcycle that still shows significant production wear from filming takes the starring role in the display. In addition, several movie-used props will be exhibited, including a full costume worn by Schwarzenegger, shot gun props, Polaroid images of character Sarah Conner (actress Linda Hamilton) used to ensure continuity between takes, and more. The additional movie memorabilia is on loan from the private collection of ScreenUsed.com.

The “T2” display will be in the Custom Culture gallery on the first floor of the main Museum building and will remain part of the gallery through the remainder of the year. The display is included with general Museum admission.

To celebrate the opening of the new display, the Museum is hosting a special “T2” Bike Night. Activities planned include a special screening of the Terminator 2: Judgment Day film in MOTOR, customary Bike Night drink and food specials, a Fat Boy photo opportunity with celebrity impersonator Almost Arnold, raffles and more. Museum curators and a ScreenUsed.com representative will also hold two gallery talks that focus on the “T2” motorcycle and memorabilia on display. The gallery talks are scheduled at 4 p.m. and 6 p.m. by the display inside the Museum. Access to the gallery talks is included with general Museum admission.