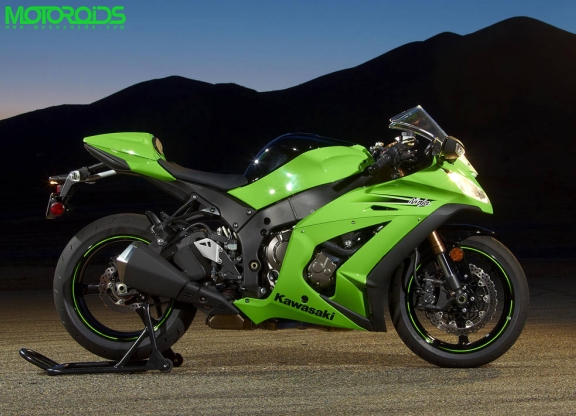 After a lot of teasers and leaked photos, the official images and details of the 2011 Kwasaki ZX-10R are finally out! Not as aggressive looking as the earlier generation ZX-10Rs, the new 2011 model aims to put function before form. And that’s precisely why Kawasaki developed the WSBK racer first and then derived a street version from it – how focused is that?

The primary highlight of the new 2011 Kawasaki ZX-10R is the mighty new engine which puts out a colossal 197 horses! Have the ram-air intakes operating in full swing and the crank will churn out 207 horses without the need of any aftermarket parts. These figures give the 2011 ZX-10R the performance crown, at least on paper. Mated to this engine are a slew of new technologies that the BMW S1000RR has already corrupted litre-class riders with. Fitted as standard equipment is the Sport Kawasaki Traction Control system (S-KTRC) which should help attract new litre-class riders. However, the S-KTRC promises to keep alive the fun of a riding a litre-class Kawasaki. Though the system monitors the front and rear end traction every five milliseconds, it allows a tiny bit of power sliding and power wheelies – now why didn’t anyone else think of that? Also onboard are the ‘power modes’ which are fast becoming a standard on these bigger beasts. Kawasaki’s power modes are categorised as ‘Full’, ‘Middle’ and ‘Low’ to help you adapt to varied riding conditions.

As if these techno wizards aren’t enough, Kawasaki also has an optional ABS package christened KIBS – Kawasaki Intelligent Braking System. The system is said to add $1000 (approx. Rs. 48,000 by current exchange rates) to the price tag of the bike. The suspension elements come in the form of the Showa Big Piston forks upfront and a horizontally mounted rear shock which is said to aid mass centralisation. As of now the ZX-10R has been shown only in two colours – the trademark neon Green and the jet Black. Kawasaki is the only one remaining from the Big Japanese Four, to have not introduced their litre class contender in India. With Kawasaki Motor India already setup, we are hoping to see this new king of the hill (again, on paper for now) to make its entry into the country…

Complete image gallery on the next page>>>