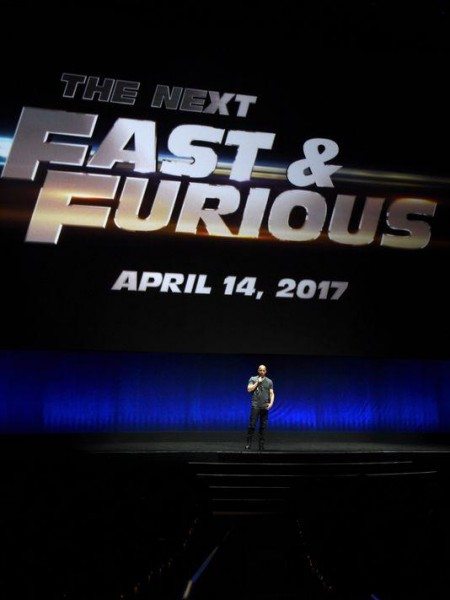 Vin Diesel was at the CinemaCon in Las Vegas, yesterday.

Vin Diesel or Dominic Toretto for most Furious fans, announced yesterday that the eighth installment of this famous franchise will be out in theatres on April 14, 2017. However, this time around there will be no Paul Walker (expected) and will instead feature other actors. Diesel was at the CinemaCon in Las Vegas, which is where the United States’ cinema theatre owners gather. An obviously emotional Diesel addressed the gathered crowd and said, “I swear to you and I swear to my brother upstairs we’re going to make the best movie you’ve ever seen.”

Furious 7 has been a runaway success and was much awaited worldwide.

The previous movie has been a real money cow (if we may say so) for the franchise and has so far grossed over a billion dollars. So it seems like everyone’s effort paid off and it’s believed that the late Paul Walker had finished 85% of his part in Furious 7 before his unfortunate demise. That said, we want to ask all of you Furious fans one question and that is, would you watch this one knowing that it wouldn’t star Brian O’Conner/Paul Walker? This is one question that will be on the tip of every fans’ tongue of this 14 year-old franchise. Let us know your thoughts and opinions on this update in the comments section. And click here to read more stories from us on this movie franchise.