After a lot of speculations, it has finally been announced that Casey Stoner will race for the Repsol Honda factory team for the 2011 MotoGP season! Stoner, who started his MotoGP career with Honda in 2006 for the LCR satellite team, moved to Ducati for the following four seasons. He also won his first (and only till date) MotoGP World Championship with the Italian outfit. Stoner will look forward to repeating his championship run with Honda as well. With his Ducati mentor, Livio Supo hacing joined HRC early this year, we can surely expect some fireworks from the Repsol Honda team next year. The surprising fact however is, Stoner’s entry into the Repsol Honda team will not endanger the seats of either of its current riders. HRC is looking forward to having a three-rider team for 2011 with Casey Stoner, Dani Pedrosa and Andrea Dovsioso – all gunning to the crown and ofcourse, the front runners, Valentino Rossi and Jeorge Lorenzo. 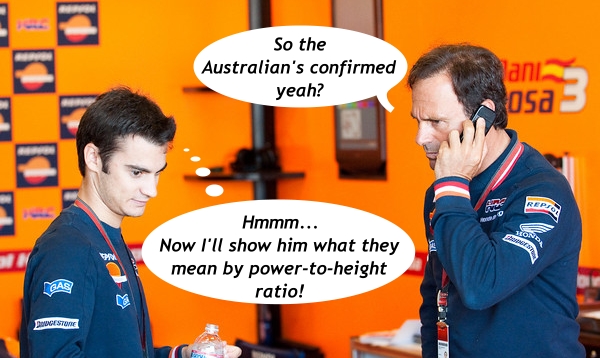 While speaking on the occasion, HRC Vice President Shuhei Nakamoto said,”We are very pleased that Casey will join Honda again next year. Clearly he is one of the top riders in MotoGP and he will bring valuable speed and experience to our team. In the factory Honda squad we already have two very strong and experienced riders in Dani Pedrosa and Andrea Dovizioso who are performing very well and currently hold second and third positions in the 2010 World Championship. HRC hopes also to retain these two riders for next year – giving us what would be a truly formidable line-up.”