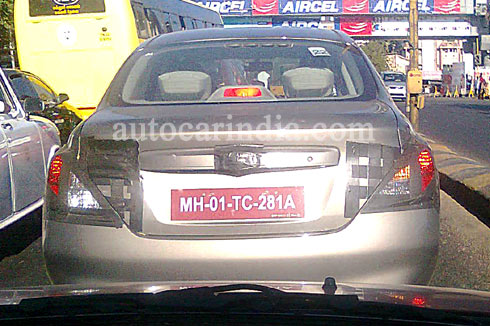 Nissan had showed its new global sedan a few months back. Christened the Sunny in China, the new sedan was slated to hit the Indian shores sometime in the second half of 2011. It seems the launch of the car is on schedule as one of ACIs readers have managed to spot the car near Chennai. In the pictures, the car is being led by a Tata Manza, probably to match its fuel efficiency. The Sunny, or the New Global Sedan, is based on Nissan’s V platform and will rolls out from the company’s Oragadam plant near Chennai. The car is slated to be sold in 170 different countries across the world.

The size of the new car seems to be quite big, and by the look of it, the Sunny would be one of the bigger sedans in the entry level segment. In the pictures, it manages to look as big as the Manza, which is by far the biggest sedan in its class. The Sunny, then, should be able to match, and probably exceed its competitors like the Swift Dzire, VW Vento, Tata Manza and Hyundai Verna in terms of interior space.

Nissan in an earlier statement had said that the new sedan may not be called Sunny in India. We are sure the details on the name for India should be out soon now, as the car is already testing.

The Sunny will be powered by two engine options in India. There will be one 1.5-litre four cylinder petrol engine, producing around 100bhp of peak power. Then there will be the 1.5-lutre dCI which powers the Logan as well as the Nissan Micra diesel. Reasonably powerful and very torquey, this diesel mill is very fuel efficient too.

Going by the first look of the car, it seems that the Sunny is going to a genuine challenger to leaders of the segment it plans to attack. Nissan is a maker of impeccably well built cars, and if it manages to price this one well, there is a very good chance that it could become one of the leading players in the segment. We are expecting a price range of 5.0 – 7.0 lakh for the new sedan, for various variants. Hope Nissan prices it well.