Home News Nissan stops Micra production in UK; to be imported from India 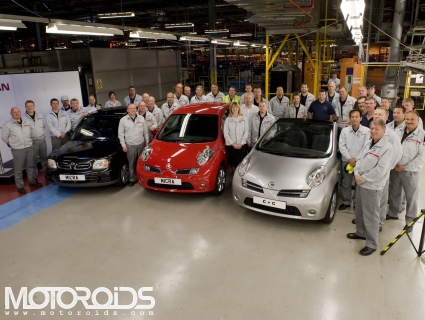 The Nissan Micra K13 was launched a couple of days back in India. And while we were busy comparing the new Nissan Micra versus the Ford Figo, the blokes at Nissan’s Sunderland plant in the UK were posing for the group photograph you see above. It was sure to an emotional day for all the people at the Sunderland plant since the factory was indulged in producing the Micra hatchback for 18 long years. Ever since the first Micra rolled out of Sunderland on the 10th of August, 1992, till date the plant has produced as many as 2,368,704 Micras (two generation models)! The third generation model, the K13 will now be imported to the UK from Chennai, India and other plants based in Thailand, Mexico and China. The Sunderland plant will now start producing the Micra based mini-SUV, the Juke.

Kevin Fitzpatrick, VP Manufacturing UK said: “I think everyone will be sorry to see the last Micra come off the line. When you produce a model for as long as we have produced Micra, it almost becomes part of your plant’s identity. There is no doubt that Micra has been a tremendous success for us and a production run of well over two million units is astounding, but like all plants we are constantly changing and updating our model mix. Micra’s departure frees up capacity on our lines meaning we can now look forward to producing the Juke in August. Although Micra is a tough act to follow, Juke is a very exciting prospect. By combining the best attributes from a compact SUV and a sports car, it will inject something truly original into the small car segment.”