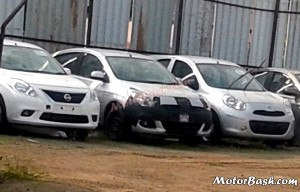 This news is sure to catch you by as much surprise as it caught us. Our good friends at Motorbash have come up with first ever spy pics of Nissan Micra Facelift for Indian market. It may be noted that the Nissan Micra came to India in 2010 and thanks to fresher competition and especially the recently launched Renault Pulse, which is essentially a re-badged Nissan Micra, the Micra has started looking a bit dated.

The pics reveal that the Nissan Micra is currently undergoing some botox treatment at its front fascia and there are fair chances of the car also getting some updates for the interiors. As can be seen on comparison with the current Micra, the Nissan Micra facelift will get a revised set of headlamps, new fog lamps housing, bigger air dam and blacked out pillars. The rear too is expected to get some minor alterations.

It is being said the engines on offer are likely to remain unchanged. However, we do expect Nissan to tweak the diesel mill for more fuel economy.

What we are really hoping for is an aggressive front end for the Nissna Micra facelift, a la Renault Pulse. The Nissan Micra facelift could be launched towards the end of this year.

UPDATE–  A closer look reveals that the car spotted might be a Renault Scala. The rumor of a Nissan Micra facelift excited us so much that we failed to properly analyze the pics. We deeply regret this error and promise you that we will be much more careful in the future. 🙁

My sincere apologies to you guys. 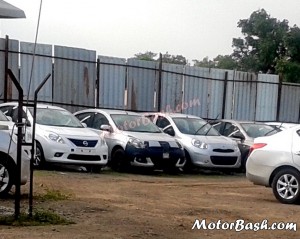