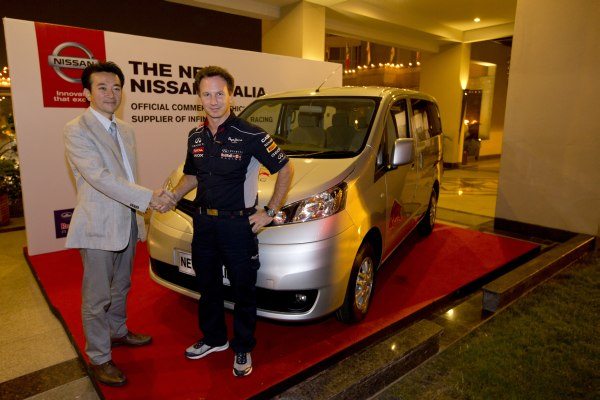 Infiniti Red Bull Racing, which is based in UK, had concluded an official global supplier contract for light commercial vehicles with Nissan in 2012. Under this contract, Nissan’s Light Commercial Vehicle Business Unit supplies the team with a fleet of more than 70 vehicles including the NV200 and NV400 at the team’s headquarters (Milton Keynes, U.K.), and at Formula One venues around the world.

The vehicles that are supplied provide support for all transportation needs, including the movement of staff, guests, and equipment for the team.

Mr. Kenichiro Yomura, MD & CEO of Nissan Motor India commented: “It gives us great pleasure to have been the Official Supplier of Light Commercial Vehicles to the Infiniti Red Bull Racing F1 team having provided our class leading range of light commercial vehicles. The Evalia was the chosen vehicle for the second consecutive year for this year’s Indian Grand Prix. With add-on features in the new Evalia, we anticipate that it will continue to derive and highlight its characteristic of an urban class utility vehicle quite vividly to the team and our Indian customers too.”

Christian Horner, Team Principal, of Infiniti Red Bull Racing, commented: “It’s the second year of our partnership with Nissan Motor Co. and we can only say that their support during the challenging times we face during the Formula One season is irreplaceable and a big contribution in executing the team’s plans with utmost efficiency. The Evalia has been our backbone for the majority of the logistics operations and we are sure that the new Evalia will only help us enhance our experience during our short but yet memorable tenure in India.”

The all new Nissan Evalia is powered by the globally-proven 1.5 dci inline-4 turbocharged diesel from Renault Nissan’s engine family, which churns out 85PS of power at 3750rpm and a maximum torque of 200Nm at 2000rpm. With a smooth-shifting five speed manual transmission, the Evalia delivers a fuel efficiency of 19.3kmpl of diesel (ARAI certified).

The new Evalia’s layout gives maximum cargo space with enhanced drive stability. The dramatic front end design with a three-dimensional, imposing angled strut grille and the character line on the body side add to the dynamic view of the vehicle.