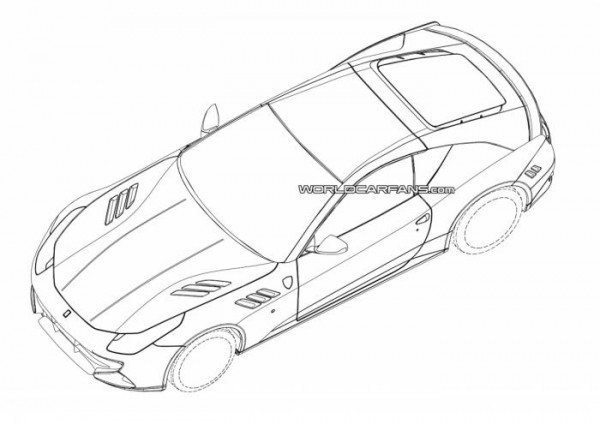 The cyber space was recently swarmed by a set of patent pics of some mysterious Ferrari model. While many were quick to claim that the pics belong to a more hardcore Ferrari FF, the boffins at Autocar decided to dig out some details and have discovered that these pictures could very well be of the next gen California. It may be noted that the next generation 2015 Ferrari California is slated to make its public debut sometime next year.

Various 2015 Ferrari California prototypes have already been spotted testing and the Autocar report seems all the more accurate if ou consider that the car shown in these pics sports a retractable hardtop.

These images also show that the upcoming car could have a FF-inspired front fascia that would consist of a set of angular headlights and a ventilated hood. At the rear end, the car will sport a bold diffuser and a four-tailpipe exhaust system.

The 2015 Ferrari California could be powered by a  twin-turbo 3.8-liter V8 engine that made its public debut in the new Maserati Quattroporte. This engine has a max power of 530 HP (390 kW) and has a peak torque of 710 Nm (542 lb-ft). However, it won’t be surprising if the good folks at Ferrari manage to extract few more prancing horses from the V8.

Stay tuned to Motoroids for more info on the upcoming 2015 Ferrari California.