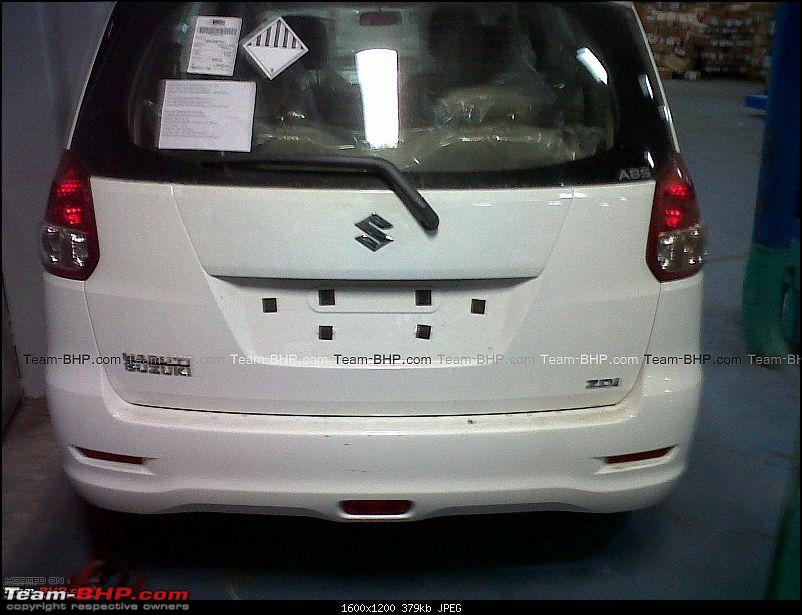 We have been expecting the production version of the RIII (or the R3), Maruti Suzuki’s people mover that it showcased at the 2010 expo, to make its production debut at the 2012 Delhi Expo. In what probably could be the first ever spy pictures of the car, a team-bhp member’s friend has managed to click the pics of a people mover from Maruti, fitted with a diesel engine and all the toys you need to play with. The spy picture is that of a ZDI variant, which indicates that the diesel car will come equipped with features such as ABS and air bags.

We cannot imaging this thing to be anything but the production version of the R3 MPV which would take on the likes of the Innova and the Tata Venture. The car seems to be very well equipped with music system, steering mounted controls, newly designed dash with beige and drak grey two-tone trim among others.

The ZDI label at the rear indicates that MSIL will utilize the 1.3 DDiS engine producing 90PS from the SX4 for this people mover, and launch the new product into the premium MPV segment alongside the Innova. The fact that the 1.3 DDIS engine is much more efficient than the Innova’s D4D unit should itself be a huge advantage.

Apparently the pictures were taken on a port where are car was being sent to Japan for further testing. The front of the car is not visible in the pics, however, the pictures of the rear suggest a rather conservative styling for the van.

Expect the pricing to be slightly below the Innova when launched. As we mentioned earlier, the new car should make its first official appearance in the production version at the 2012 Expo.