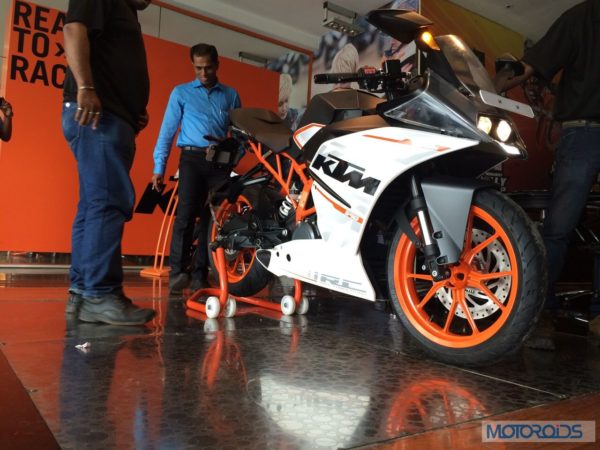 KTM officially launched the fully faired version of its Duke motorcycles, the RC series of supersport motorcycles, the RC 390 and the RC 200, at an event in Pune on September 9. The RC Supersport series comes with KTM’s vast experience and knowledge gained in the world of Moto3 which is the 250cc segment of MotoGP racing.

The recently launched KTM RC series has reached dealerships for display. The bookings, as said during the RC launch event, have commenced at Rs 30,000. Avid Motoroids follower Yogesh Naik visited the Vashi dealership of KTM and sent us the images of the new KTM RC390. 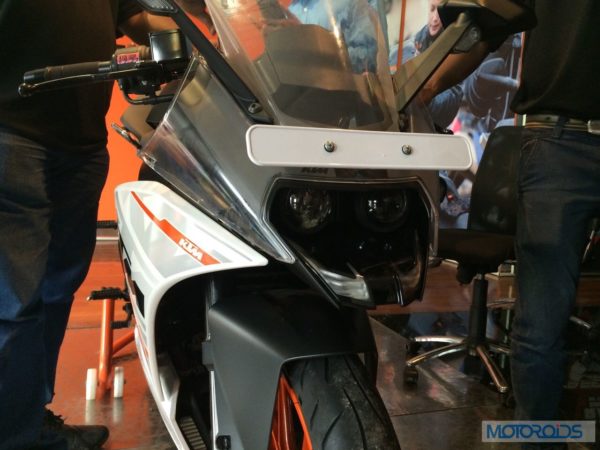 Powering the KTM RC390 is a 375cc single-cylinder liquid-cooled engine that churns out around 43.5PS of power and 35 Nm of torque. The RC200 on the other hand is powered by a 199.5cc single-cylinder liquid-cooled unit that puts out 25hp of power and 19.2Nm of torque. Both motorcycles get premium features such as twin projector headlamps, body integrated pillion, Upside down front suspensions by WP and an aluminium swingarm. The KTM RC390 receives additional features like ABS by BOSCH and Metzeler tyres.

Would you buy the RC390 or go for the naked 390 Duke? Share your thoughts and opinions through comments section. Stay tuned to Motoroids for more updates from motoring world.