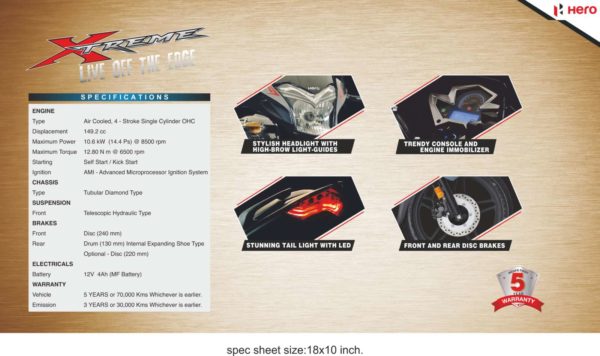 As has become a well known fact by now, Hero unveiled the updated Hero Xtreme 2013 along with the new Karizma R and the Karizma ZMR at a media event in NCR yesterday.

The updated Xtreme comes with a host of styling changes and new features and could go on sale before the end of this month.

New features on offer include a new electronic engine immobilizer and a new side stand switch. The latter turns off the ignition if the side stand is not folder properly. The Xtreme is also the first bike in its segment to offer a mobile phone charging port.

Visual updates to the bike include a revised tank, which looses the tank scoops, a new bikini fairing, which looses the indicators and new rear and side panels. The bike also gets a new headlight, LED rear indicators, new instrument console and new 3-D logos.

The new instrument console invokes memories of Star Trek in my mind and it seems like the boffins at Hero MotoCorp have tried a bit too hard to give a new age styling to the console.

Alloy wheels and tires have been carried over from the pre-facelift model. Unlike what was being said, the bike doesn’t get a monoshock and will come with twin gas charged shock absorbers. Braking will be courtesy front and rear disc brakes.

In typical Hero fashion, the engine has been left untouched and the bike will continue to be powered by the same 149.2cc four-stroke engine that powers the pre-facelift model. Power figures too are the same and the bike has a max power of 14.4 PS @ 8,500 RPM and peak torque of 12.8 Nm @ 6,500 RPM.

Stay tuned to Motoroids for more updates on the upcoming new Hero Xtereme 2013.