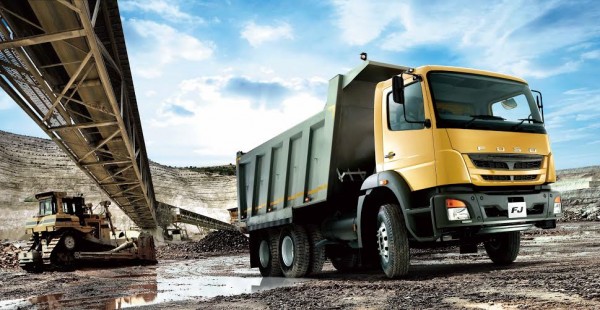 Daimler India Commercial Vehicles Pvt. Ltd. (DICV), a 100% wholly owned subsidiary of Daimler AG, Stuttgart, Germany along with Mitsubishi Fuso Truck and Bus Corporation, Japan (MFTBC), a Daimler Company, launched its robust DICV-made trucks in Zimbabwe, making it the 4th African market since the start of export in May 2013. As a part of the first 15 export markets for DICV under the new Asia Business Model, the Zimbabwe market is a potential market in Africa. The trucks will be sold through the exclusive dealer, ZIMOCO, an authorized local distributor in Zimbabwe. These trucks are already present in the markets of Kenya, Sri Lanka, Zambia and Tanzania with more markets to follow in Africa and Asia.

The FUSO truck range manufactured at DICV‘s Oragadam plant comprise 5 models spanning Medium/Heavy-duty (25 – 49 tonnes referred to as ‘FJ’, ‘FO’ & ‘FZ’) and Light/Medium-duty (9 – 16 tonnes referred to as ‘FA’ & ‘FI’). The robust, fuel-efficient trucks, developed to meet the ever demanding customer expectations in the growth markets, reinforce FUSO’s leading presence in Africa. Rigorous testing has been conducted under most strenuous driving conditions to ensure maximum reliability of the trucks.

FUSO is already showing strong growth potential in Africa with presence in over 35 markets, and almost doubling sales in the first quarter of 2014 to 2,000 units, compared to the same period in 2013. With the addition of this new range of trucks into its product portfolio, FUSO offers its customers a wider choice of Trucks that are robust, reliable and fuel efficient, backed by robust distribution network.

With a clear view on the growth potential in Africa, FUSO is in preparation to continuously add further markets to its strong market presence. Daimler Trucks Asia expects to gain additional growth momentum in the future markets on top of the current existing markets from its new Asia Business Model introduced in 2013. The new business model creates synergies by bundling the strengths of the Japan-based Mitsubishi Fuso Truck and Bus Corp. (MFTBC) and Daimler India Commercial Vehicles (DICV) under the Umbrella of Daimler Trucks Asia.