Can practical be fun? That’s a tough question to answer. More so, when you have to find the answer to that question in the form of a motorcar. And in these times where all things metal are being churned out of big robotic factories with their souls missing, some, like Ford, still try their best to make cars you can find a connect with. Because if they didn’t, there is no other reason for the Ford Ecosport S to exist. But it does, and it does so on its sporty alloys and thin profile tyres because Ford’s customers wanted it to. So what is it all about? And why is it here even when the Ford Ecosport was the most fun to drive and involving compact SUV you could buy anyways? Let’s find out.

Too tired to read? Check out the video review below:

Dragon power felt good for everyday driving when we sampled the new 1.5 litre 3 cylinder motor in the facelifted Ecosport last year. However, it did lack that sucker punch one seeks while piloting an able chassis-suspension setup like the one that underpins the Ecosport. Giving in to customer requests then, Ford has brought back the award winning 1.0-litre Ecoboost motor and paired it with an all-new 6-speed manual box. Available only under the hood of this ‘S’ badged car, the motor cranks out 125 PS @ 6,000 rpm and 170 NM of torque between 1500-4500 rpm. Up by 2 PS and 20 NM over the petrol sipping Dragon series motor, but down by a third on displacement! 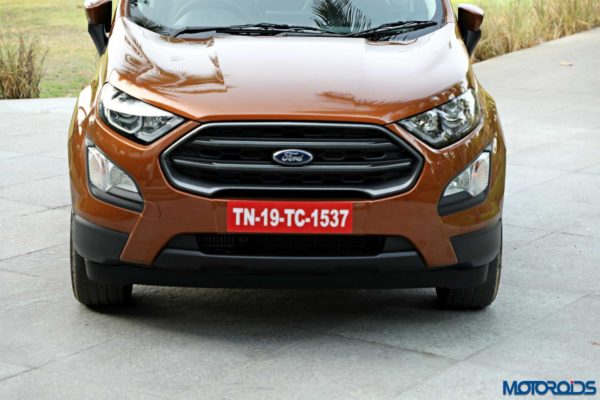 Right away, folks who have sampled the Ecoboost motor before it made a comeback, would be happy to know that initial lag is minimal and masked well by the short initial ratios of the new gearbox. The engine gets up to 1,500 rpm rather quickly and begins to feel healthy from that mark. There is a step up in power near the 2,000 rpm mark, when the turbo kicks in and then the motor simply sings all the way to 6,600 rpm until the limiter cuts in. It gets there without any hiccups and builds power in a seamless manner. 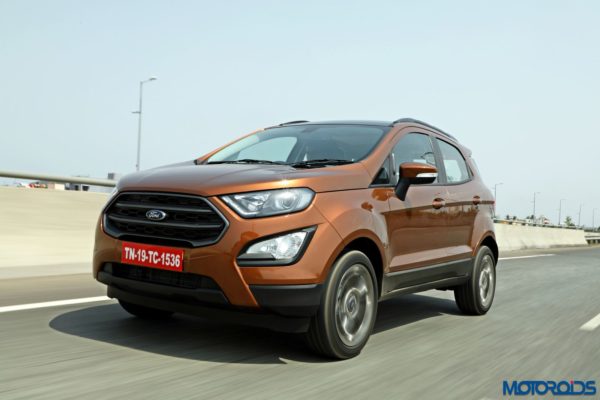 If in the mood for some thrashing, third gear is good enough to help the car breach the 150 kph mark. For someone who simply wishes to cruise, in 6th gear, the Ecoboost powered Ecosport can chug along at an indicated 100 kph with the motor ticking away silently at 2,400 rpm. Mash the pedal in the initial gears and the engine’s 3-cylinder thrum cranks up its decibels after the 4,000 rpm mark. However, at idle and at all engine speeds, it delivers shiver free performance without making its presence felt through the chassis, steering wheel or those aluminium pedals. In-gear acceleration is surprisingly good if you consider the displacement of the Ecoboost motor, however, just because it is a rev happy unit, you would downshift and bury the pedal just for kicks. 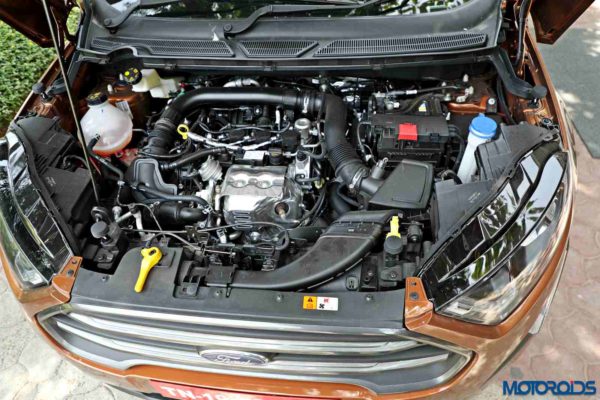 Gearshifts are smooth through the gates, however, some added amount of crispness would’ve helped when the boy racer inside takes over. Surprisingly, for a small capacity petrol engine, the clutch felt heavy on our left foot. But as is the case with most things, one gets used to it after spending some time with the car. The Ecoboost powered Ecosport is rated for a fuel economy of 18.1 kpl and as we discovered, sane driving on the highway will flash a number which can be a digit (+ or -1) away from that figure. Within the city, we expect the economy to be in the range of 10-13 kpl, and having said that, a double digit economy number can be easily achieved even in crowded situations. If diesel engines float your boat, the Ecosport ‘S’ can be had powered by the brilliant 1.5-litre TDCi motor too. 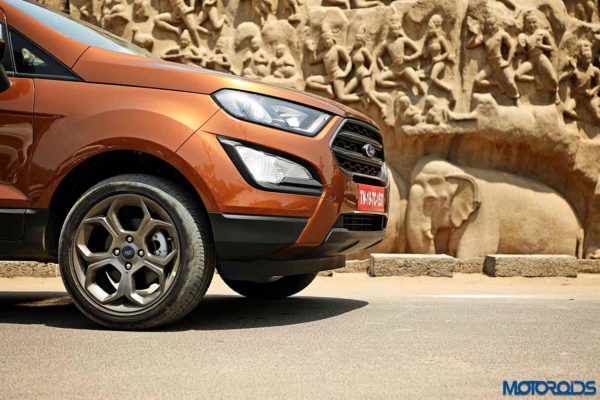 What’s With The Thin Rubber?

Where the Titanium + trim was sold with 17″ wheels and 50 profile rubber until now, it is now the ‘S’ trim which gets that kit. The former now rides on 60 profile 16″ tyres. One look will have you believe that unless the roads are smooth, the Ecosport will probably crash into everything and you’ll have to be careful when the going gets rough (read huge potholes, severely broken roads and speed breakers). The latter part of that sentence is true, however, as we sampled on a short detour off-road, the suspension feels well damped and the car rides through undulations without transferring too much discomfort through the chassis, towards the cabin. On finished surfaces, it doesn’t hop or skips through rumble strips and can still absorb quite a few changes in the surface. Although it isn’t as supple as an Ecosport riding on taller profile rubber, the ride quality is still great for a family car and those inside will still be quite comfortable when you travel together. 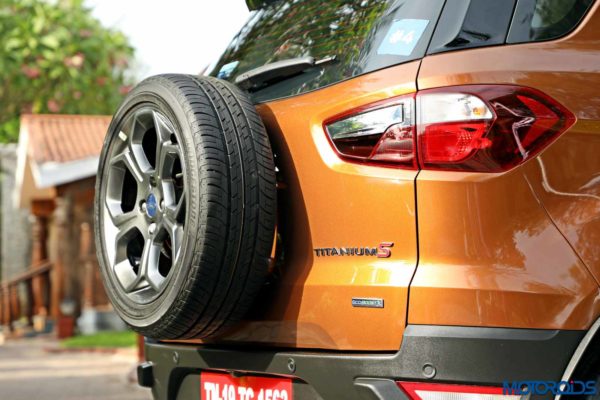 If you’re out on your own though, you would pat your back for picking this top spec trim. The Ecosport feels sure footed and extremely stable at high speeds in a straight line, or even when you’re attacking flowing corners. The steering is quite close to an analogue unit and feels natural and well connected when you dial in those inputs. Our drive route did not include any corners we could attack. However, from the experience we had with the facelifted car last year, we know that the Ecosport is just as much fun through bends. And since there is lesser weight under the hood now because of this smaller motor, turn ins and changes in direction will only be quicker and more fun. The brakes on the Ecosport are at par for the performance on offer and have been nicely calibrated, with just the right amount of sharpness, bite and progressive behaviour mixed together. 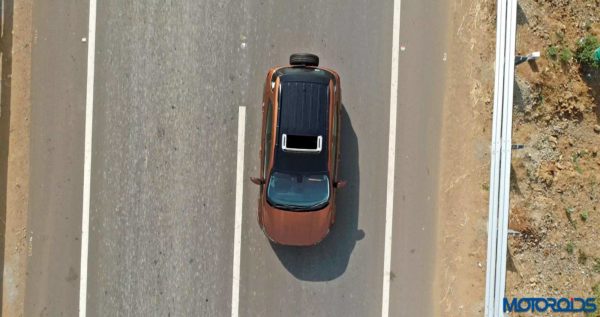 Pretty Face and that Roof

Making its debut on the Ecosport is a sunroof, which Ford, for marketing reasons, calls it a “Funroof”. It is available on the ‘S’ trim (with a blacked out roof) and can also be had as a part of the ‘Signature Pack’ which is available on the Titanium variants (with the 1.5 TDCi and 1.5 Dragon petrol motor). The insides of the ‘S’ trim get nice looking matte finished orange highlights around the cabin and contrast stitching on the wheel and those seats. The tyre pressure monitoring system leaves the Titanium + ship and now floats only on the MID display inside the ‘S’ trim. Also, only the ‘S’ trim gets chrome highlights around the dials in the instrument console. The ‘Signature’ and ‘S’ trim get fancy 17″ alloy wheels which are wrapped in 205 section rubber with a 50 profile, the pattern on the ‘S’ though is simply fantastic. 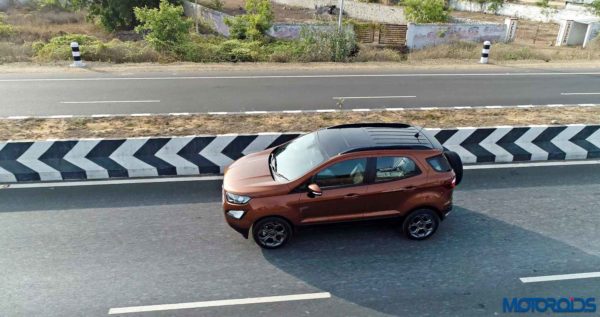 Cosmtic changes on the outside include a blacked out grille on the ‘S’, which gets a chrome outline on the ‘Signature’ trim. The headlights on the former are blacked out and HIDs have been fitted inside the projector units. Those two things are not true for the Signature trim. Where all bits on the face follow a dark theme on the Ecosport S, the Signature gets a silver finished faux skid plate. Everything else is just the same as the facelifted Ecosport which was released late last year. 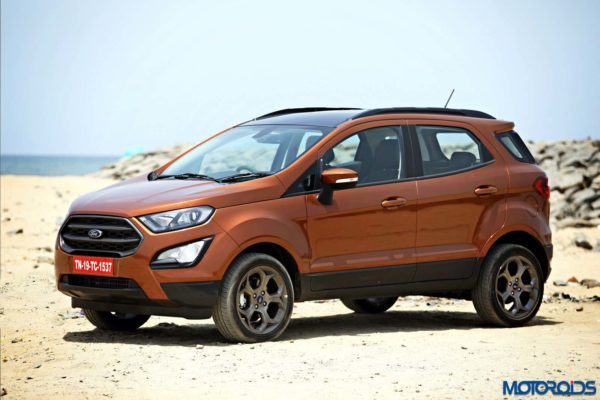 All we can say is that powered by the Ecoboost motor, the Ecosport answers the question we asked at the beginning of this review and answers it with conviction. In addition, these two new trims add that much needed kit which should make feature hunters happy. And then, there’s the way that the Ecosport drives and how it makes you feel behind the wheel, which is an experience yet to be matched by its rivals. A package so well rounded, you just can’t go wrong with this car.