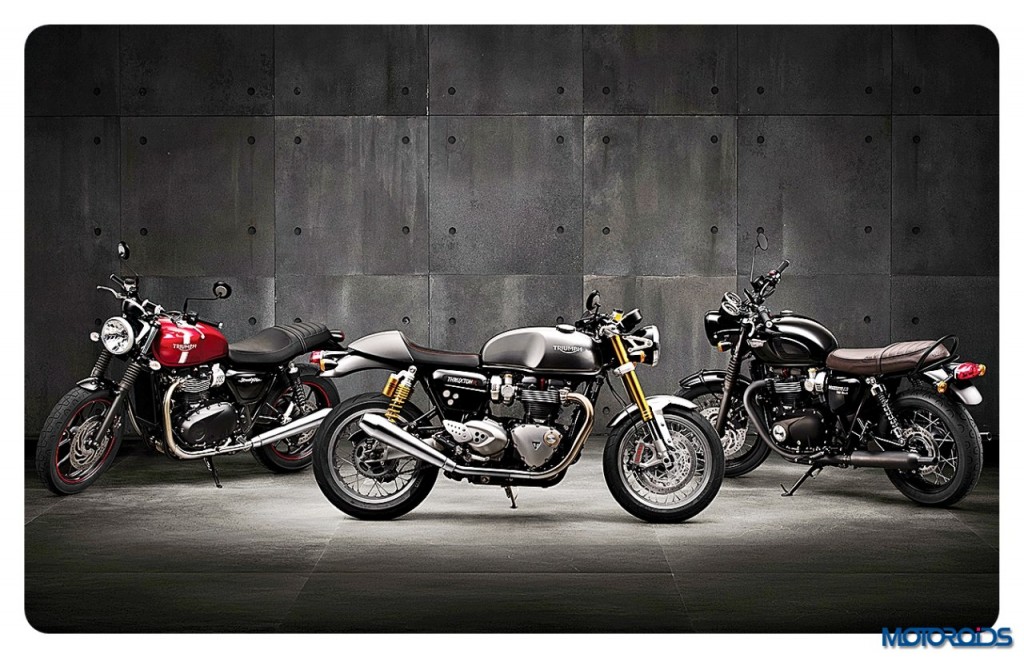 Triumph Bonneville is one of the few motorcycles which have stood the test of time over decades, without having to change its authentic styling according to the ever swinging trends. And it’s the nameplate’s history and lineage that has inspired the all-new 2016 model line-up of the family.

While Triumph still is the quintessential maker of retro style cafe racers, the recent competition from BMW in the form of the R nine T and Ducati scrambler has forced the British motorcycle maker to sit up and clearly distinguish itself from the rest of the pack. Styling that’s true of the brand’s roots, along with performance and technology which is a nod to the modern times is what Triumph believes will make its new products shine. 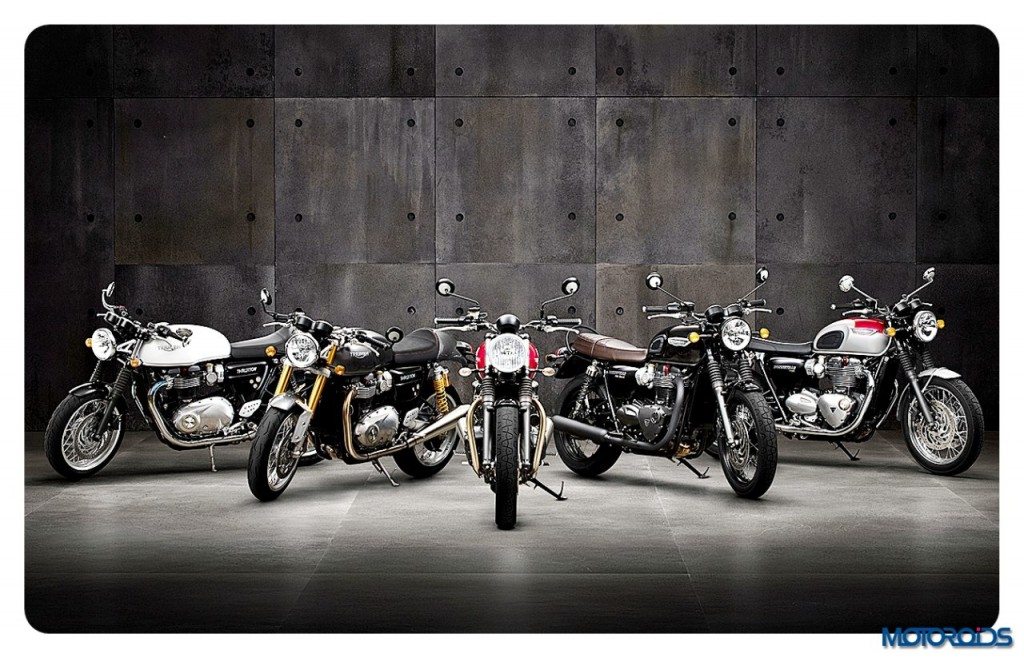 The 2016 Bonneville, thus, has been highly anticipated – and that wait is over now, as Triumph has officially unveiled the completely overhauled Bonneville MY 2016 lineup for the model.

The new Triumph Bonneville family is presented in three main flavours – the accessible Street Twin, the mid-level duo of the T120 / T120 Black and the top of the line

Each motorcycle model features a different chassis and a different liquid cooled parallel twin engine. Such has been the extent of this overhaul that none of the new motorcycles share even a single component with the existing Bonneville lineup according to Triumph. 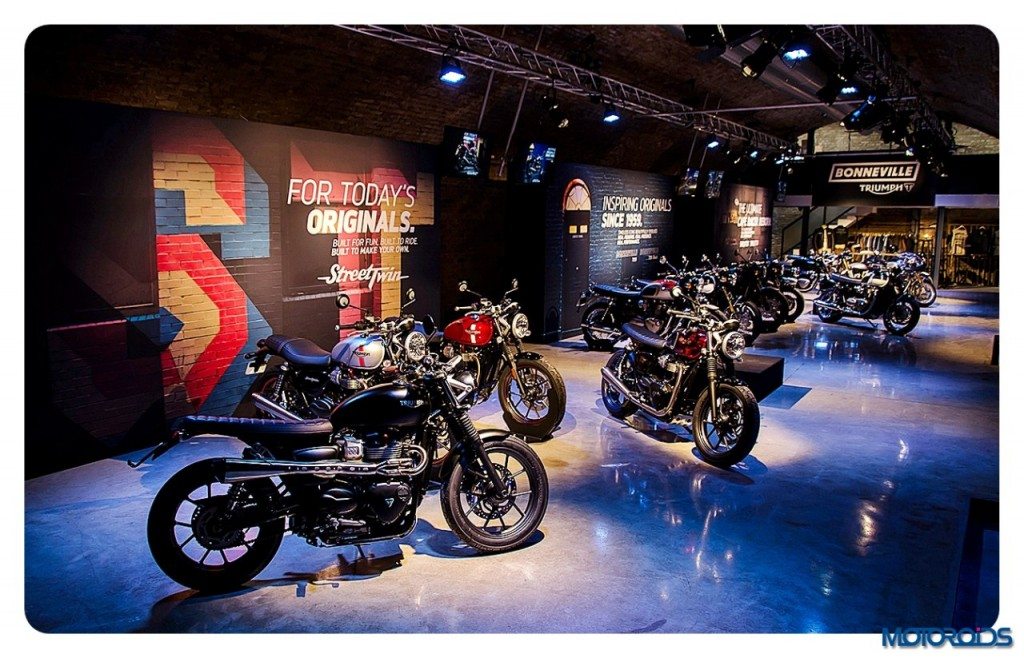 Along with the stylistic and engine related changes, the new generation Bonneville family also features modern electronics including drive by wire tech, ABS, traction control, slip-assist clutch and other small but significant changes such as LED tail-lamps, USB charging and ignition key with immobilizer.

The three new models are explained in detail below 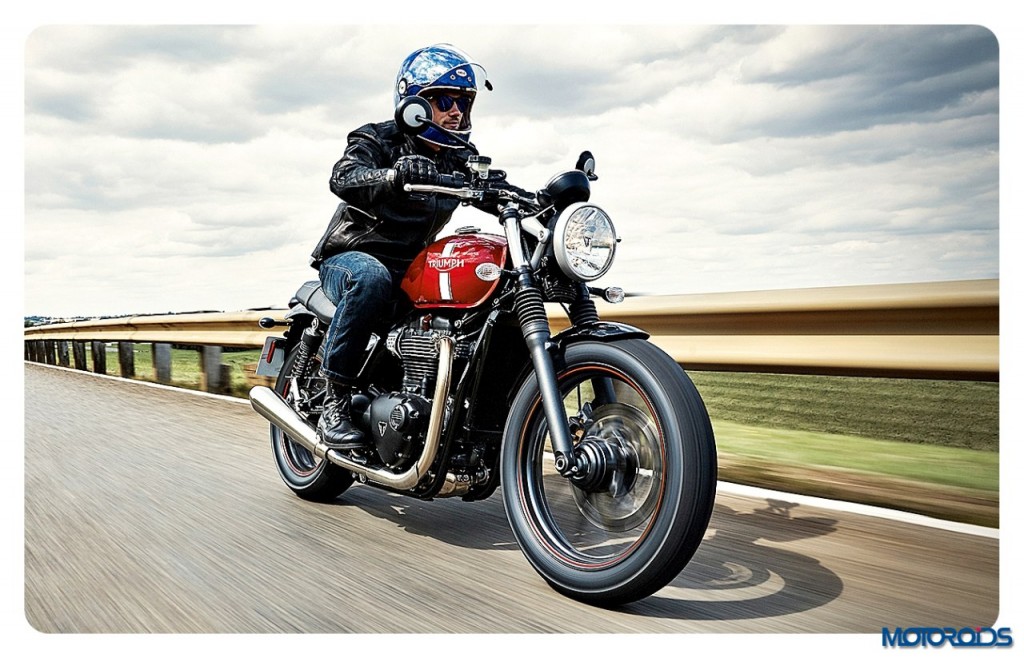 The Street Twin is the new entry-level Triumph featuring a 900cc liquid cooled twin cylinder engine. Full output figures have not been revealed by Triumph, though we do have the torque figures. The Street Twin creates 80 Nm of peak torque at 3,200rpm, 18% more than both the previous Bonneville and Ducati’s Scrambler, according to Triumph. Not just that, Triumph says the new liquid-cooled engine offers 36% better fuel-economy over the old Bonneville. 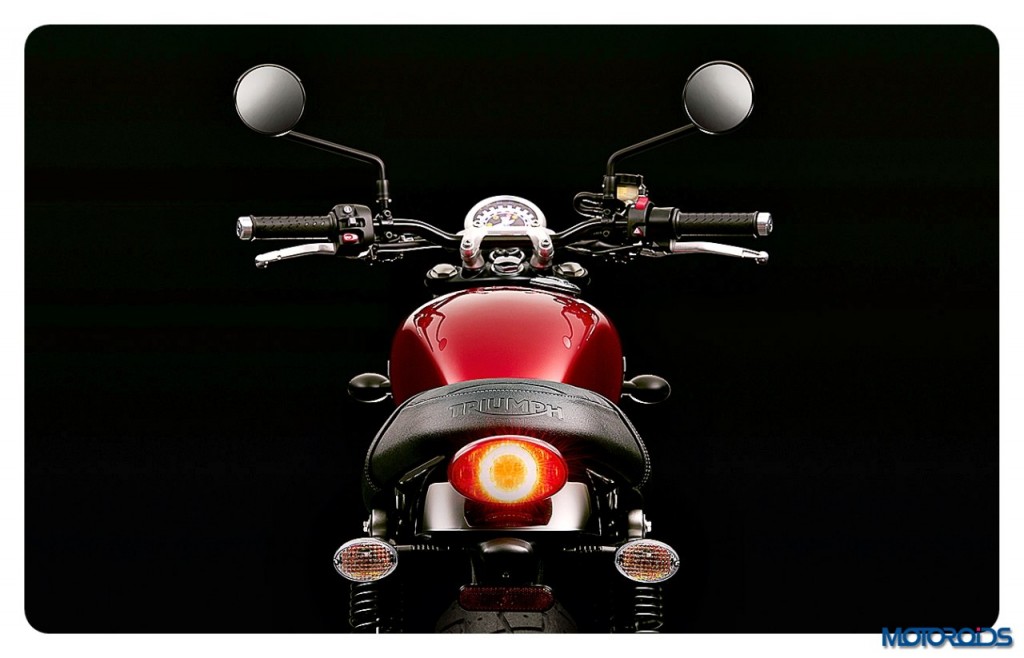 Triumph describes the basic Street Twin as its ‘most contemporary, fun and accessible new Bonneville’. Styling highlights include a black engine case, a contrasting lined wheel rim, a classic looking up-swept brushed stainless steel exhaust system and cast wheels. As goes without saying, the performance, both in terms of acceleration and handling is expected to be superior to the previous model. The Street Twin can be had in red, silver and three choices of black: matt, ‘Jet’ and ‘Phantom’. 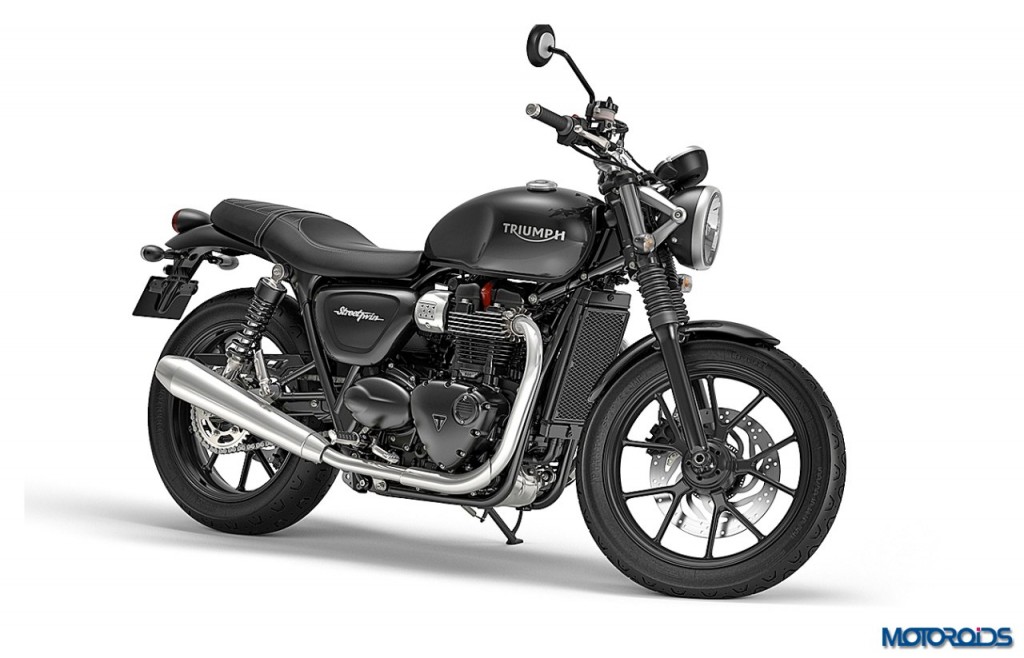 The T120 is inspired by the legendary 1959 Bonneville and styled to incorporate more of the original’s iconic DNA,’ according to Triumph.  The motorcycle is offered in two styling flavours, the T120 and the T120 Black. So while the T120 has brushed aluminium engine covers with bronze detailing, the T120 Black gets black engine covers with machined aluminium detailing. Both models feature a peashooter exhaust with a double-skin design that hides the catalytic converter behind a single, seamless section of pipe. 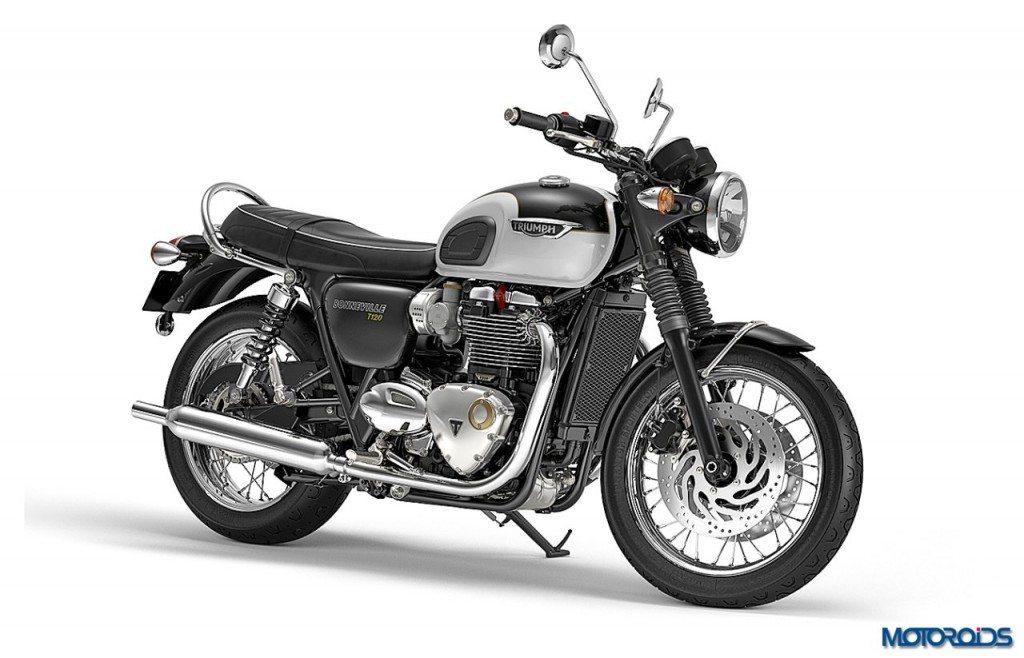 Powering the new Bonneville T120 is the all-new 1200cc ‘high torque’ 8 valve, parallel twin engine. Built from the ground up, the new engine produces a peak torque figure of 105Nm at a low 3100 rpm, claimed to be 54% more than the previous generation model, and 9% more than Harley’s Forty-Eight. 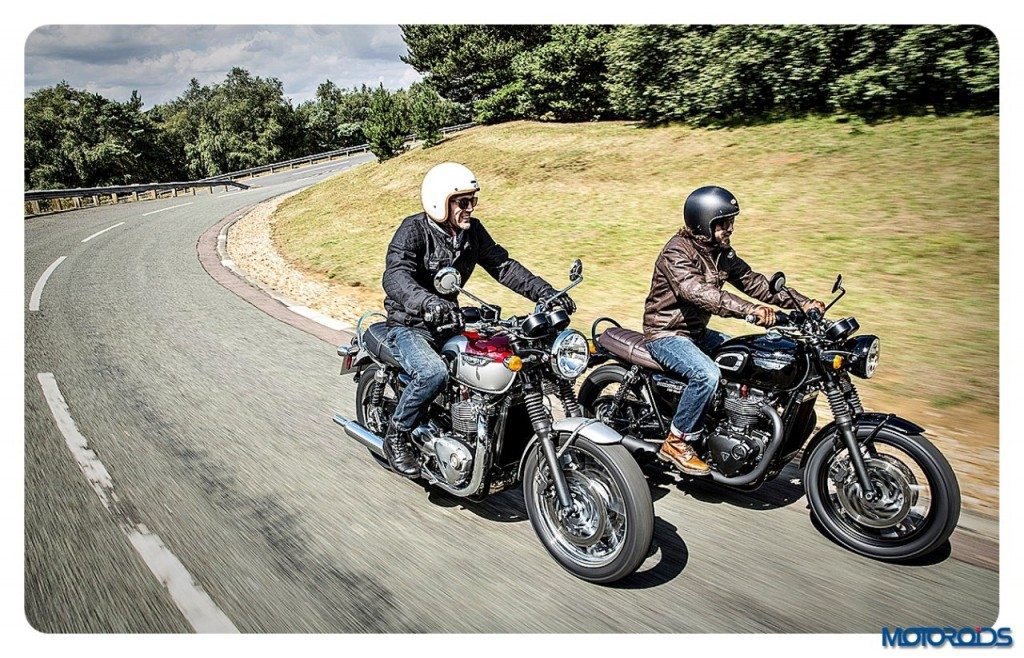 The T120 gets Road and Rain riding modes

The Inspiration Kit for the T120 gets over 160 new stylish, high quality accessories.

The Prestige inspiration kit for the T120 includes

The T120 comes in black, red, red and silver or black and white. The T120 Black can be had in black or ‘Matt Graphite’.

The new Bonneville range is topped by the Thruxton / Thruxton R duo. The most powerful motorcycle in the lineup is powered by the new ‘Thruxton’ spec 1200cc, 8 valve, parallel twin engine. The new ‘low inertia – high performance’ six-speed engine features a lighter crank, higher compression and unique airbox. The Thruxton spec engine delivers a peak torque figure of 112Nm at 4950rpm, which Triumph claims is 62% more than the previous generation. 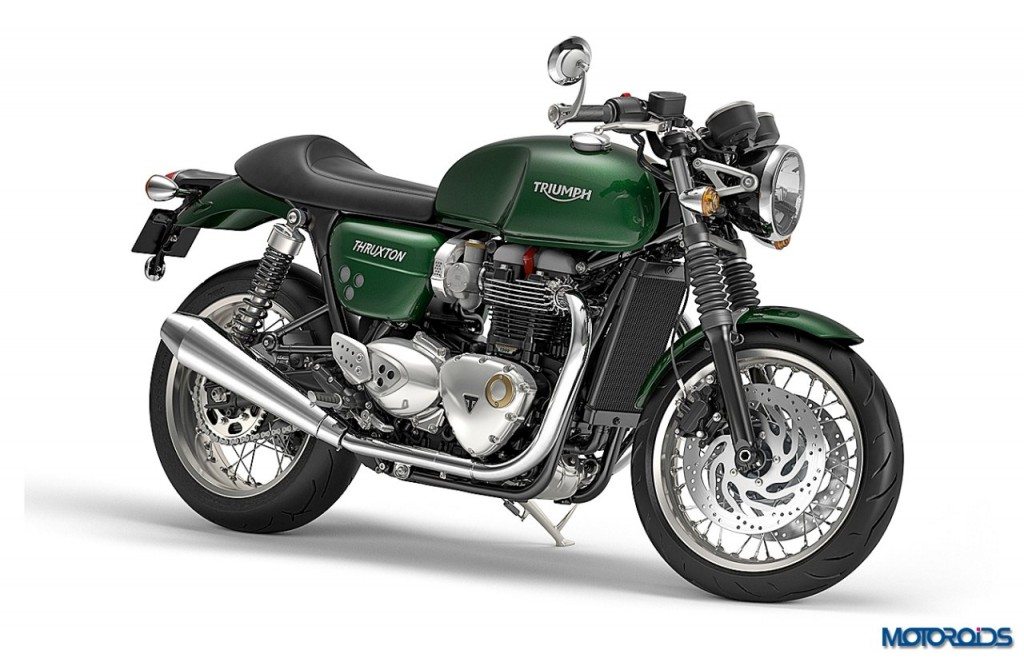 The Thruxton has three riding modes, over the T120’s two. In addition to the ‘road’ and ‘rain’ modes, the Thruxton also gets a third ‘sport’ mode promising a ‘more immediate throttle response’ according to Triumph. 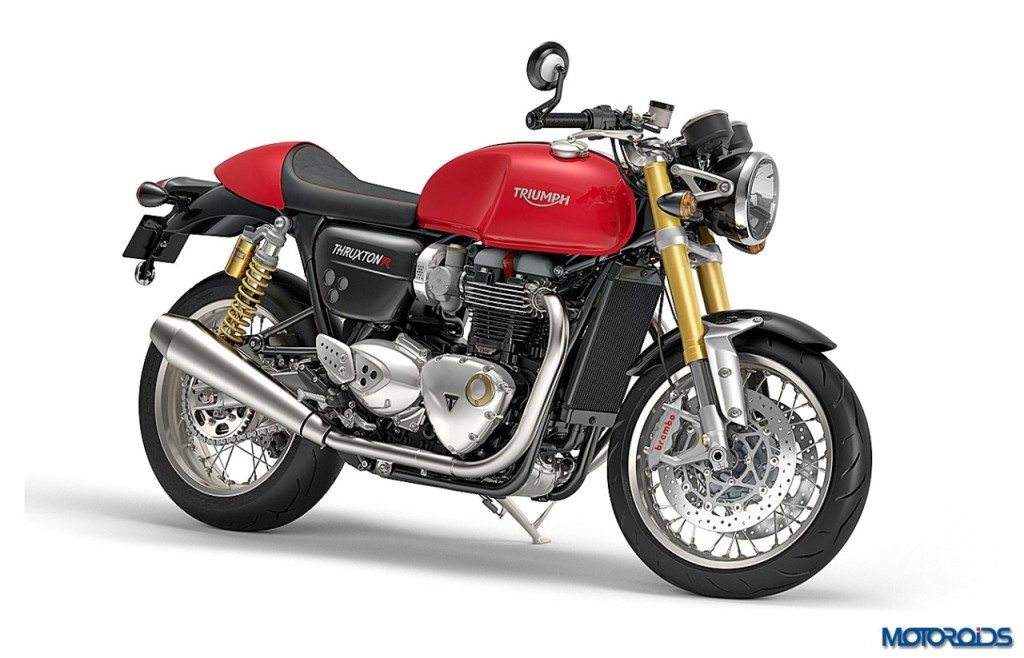 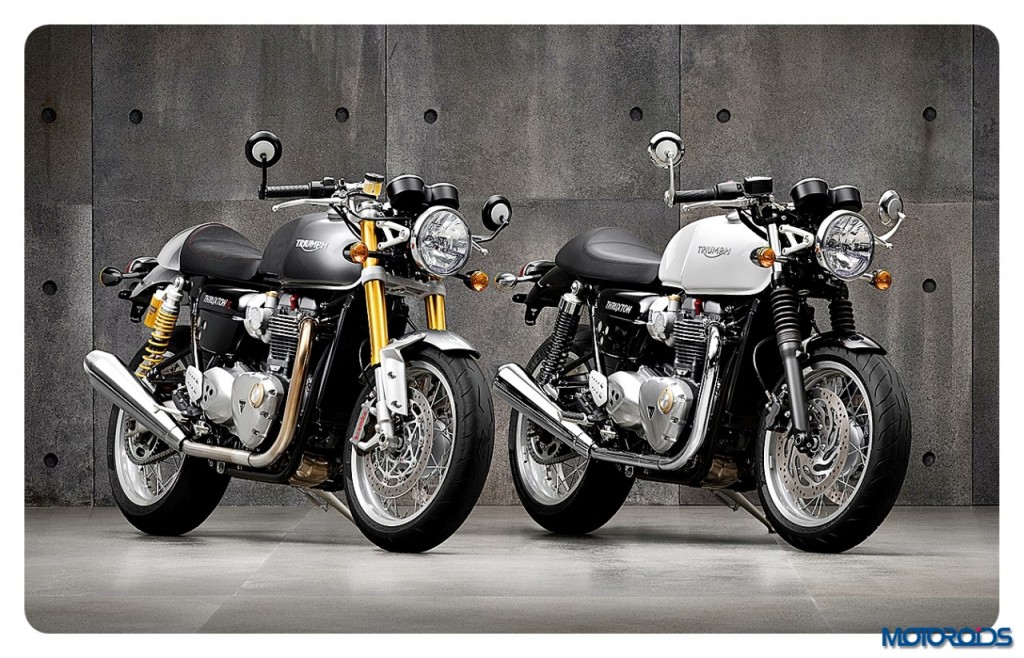 In addition, there is a ‘Performance Kit’ exclusively for the Thruxton R, which will be launched in 2016.  The race kit has been specifically designed and developed for competition use and closed circuit racing. Without revealing any further details, the company states “the Factory Race kit will take the standard engine performance to an even higher level, with more power, torque and lower overall weight” 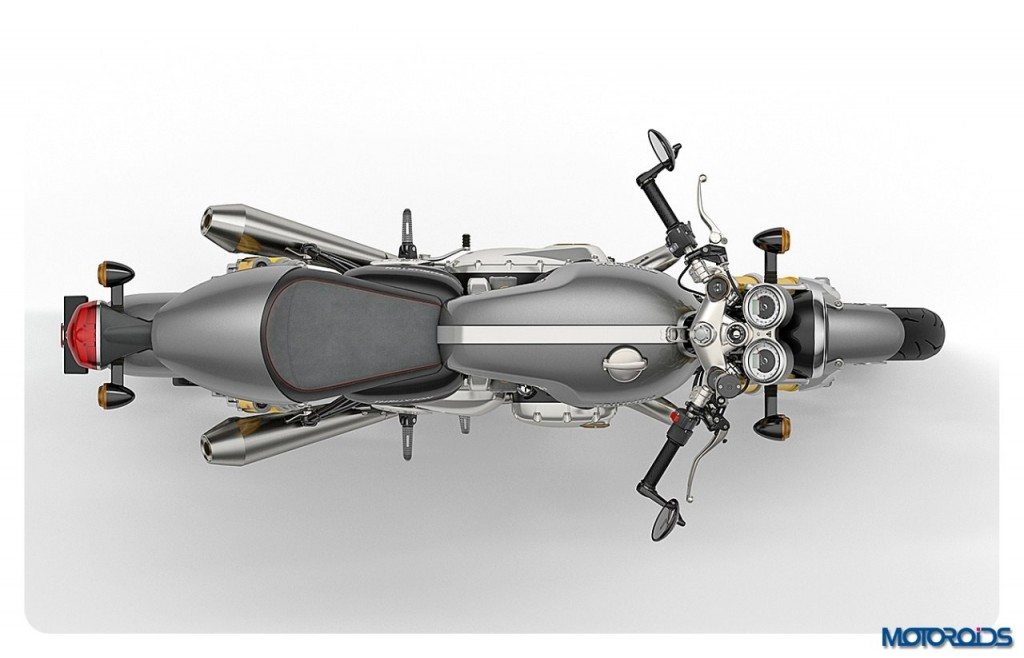 The new liquid cooled range of engines have replaced all the current gen Bonneville models, except for the Scrambler, America and Speedmaster, which will continue to be sold alongside the new range for the next couple of years.

Check out an exhaustive image gallery of the new motorcycles below