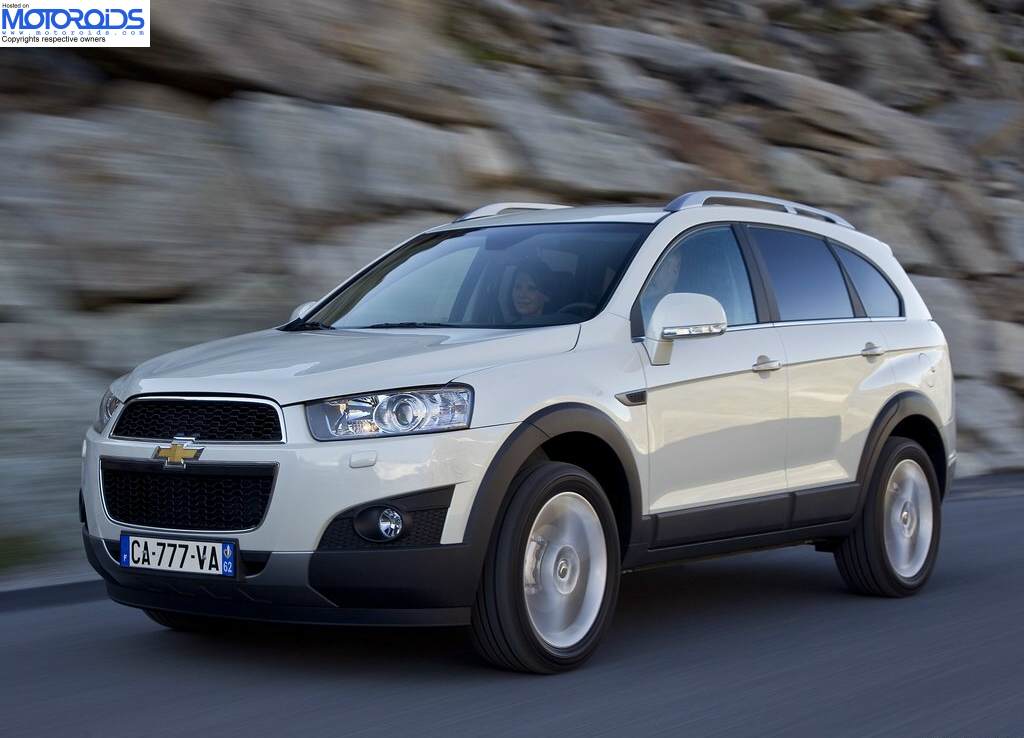 Chevrolet is readying its new, 2012 version of the Captiva to replace the current version of the SUV in India. In its latest iteration, the Captiva will not just feature a cosmetic upgrade, but will also get a new engine and transmission along with a host of interior, NVH and feature related changes.  Based on the international press release from the company, let’s have a look a look at what all changes the new international version of the car has witnessed, to get an idea of what we can expect from the car when it’s launched in India.

The Captiva now sports a new dual opening grille to match Chevrolet’s new design philosophy, much bigger than outgoing version. Chevy badge on the grille is 10% bigger than the earlier one, and finished in a grained golden surface. There is a new design for the aluminium bonnet with the lamps too having been redesigned.

The area around the front fog lamps in the lower section of the front bumper has received a lot of attention, so that the fog lamp outline now runs seamlessly into the skid plate, which gives the whole front a more unified look.

Near the front fenders, the side air-vents have been re-shaped and now take on a more angular shape to emphasize the new Captiva’s sporting intentions. Captiva’s front fenders now also have re-sculptured and more muscular wheel arches, and are able to accommodate increased wheel sizes of between 17 to 19-inches. Turn signals integrated into the exterior wing mirrors are a standard feature on the 2012 version. Depending on the trim, the 2012 Captiva comes with black roof-rail and body-colored door handles, or silver roof-rails and door handles.

The parking brake has been converted into an electronic unit, for starters. Dual cockpit, Corvetter inspired design and wrap-around front fascia are the characteristics of the 2012 Captiva’s interior. Chevrolet claim to have enhanced the perception of quality in the cabin. The quality and design of materials is claimed to be much better than the outgoing version.

The seat fabric will be new, and the A/C vents have been redesigned for better ventilation and de-misting performance. The gearshift lever is more upmarket, and so is the material used on the dash. The interior illumination is now a crisp, ice-blue while the analogue instrument cluster itself has also been modernized.

The center console features a new digital clock and new switches. Controls are re-positioned for better ergonomics. Switches for the electric wing mirrors and headlamps have also been re-positioned for easier and safer reach for the driver.

The center console has been given a facelift with new vinyl surfacing and interior finish; it has also been repositioned marginally lower than previously – and is slightly longer – to improve the position of the armrest. The new Captiva comes with USB and Aux-in support.

Folding the third row, you get a boot space of 769 liters. By folding flat both the second and third rows the cargo area is increased to 1,577 liters. Even with the third row of seats in place, the Chevrolet Captiva maintains a useful 97 liters of available space.

Sound quality inside the cabin has been improved, as the audio speakers have been re-positioned in the doors and a raft of engineering improvements to the interior acoustics – including on the windshield, doors and headlining – have resulted in reduced road, wind and engine noise.

Chevrolet claim to have worked very hard on implroving the handling quality of the new 2012 Captiva. Changes have been made to chassis hardware on the new model to make Captiva a better handling and more comfortable car.

Active on-demand four-wheel drive is available as an option. For the first time on Chevrolet Captiva, Hill Start Assist (HSA) will feature on all vehicles.

The new Captiva is expected by October 2011 with price remaining unchanged and ranging from 19 to 21 lakh rupees. Stay tuned for more specific details about the Indian version as it arrives here.

Do you think the new Captiva can be the king of the 20 lakh diesel SUV segment in its new avatar? Do let us know