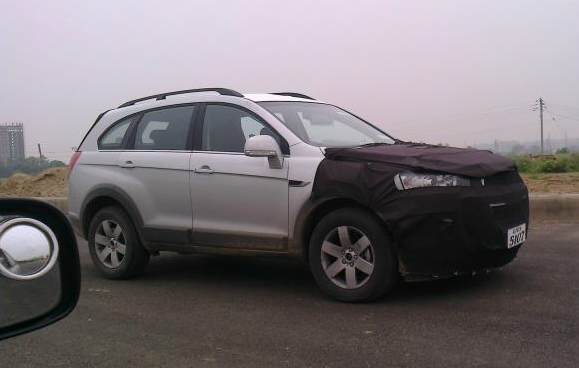 The Chevrolet Captiva has made its mark as a capable SUV in the 20-lakh rupee category. Offering premium interiors, great features and a diesel engine, the Captiva has managed to make quite a mark for itself in the Indian car market. Internationally, Chevrolet have updated the Captiva with a new, 2012 model year version, with loads of enhancements made to it, more about which you can read in our previous post. The new version of the car is slated to make its debut late in 2011 or early 2012.

Now one of the followers of the Car and Bike Show have managed to click some spy pictures of the new, 2012 version of the car undergoing testing in Gurgaon near New Delhi. The car’s front area is wrapped in cladding, as the radiator grille and the headlamps of the 2012 Captiva are the biggest differentiators for the car from its current avatar.

The new Captiva, apart from a different exterior will also spot a host of new features. The most prominent of these would be hill-hold functionality, ESP, Traction Control and more airbags. As we had discussed in our earlier post as well, the 2012 version of the Chevy SUV will sport a 2.2-liter turbo diesel engine which is available in two states of tune. The maximum power for the higher powered version is 184 hp at 3800 rpm while maximum torque of 400 Nm is achieved at 2000 rpm. The second version has a maximum engine power of 163 hp at 3800 and torque of 350 Nm at 2000 rpm. We expect the 184bhp version to make it to India.

The engine is available with both manual and auto transmissions, and just like the current Captiva, the new version too will offer both the options to the customer.