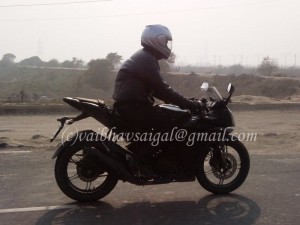 We had earlier reported on our forums that a new Yamaha R15 was probably going to be launched soon. A few of our members had caught the bike testing and the new design of alloys and split seat suggested that this was a new version of the R15. There was, however, no clarity on this subject.

Now the news in the auto circles is rife that Yamaha is indeed launching the new R15 on the 25th of January 2011. There doesn’t seem to be anything drastically new in terms of technology, but the new bike has fatter tyres (we have heard enough complaints about those slim MRF’s although they are perfect functionally) and has a more substantial rear end. The changes are based on customer feedback that the company received when they went to the Yamaha fanboys in search of some insights. The 2011 version of the R15 also features a pair of really sexy looking 5 spoke (actually 10, if you count a pair as 2) alloys, a high pillion seat and LED tail lamps. The price is expected to remain unchanged.

What do you think of the new R15 design? Is it more biased towards form than the ‘true to function’ current version. Won’t the fatter tyres reduce the sprint timings? Do let us know your views!