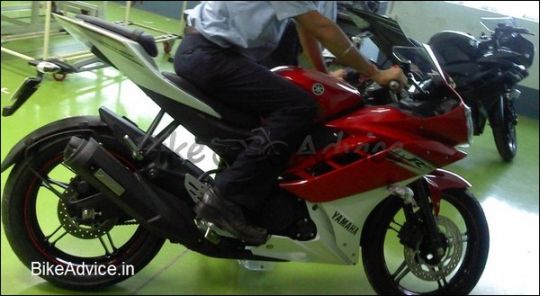 The mystery machine is finally out. The obscurity shrouding the 2011 face lift version of the Yamaha R15 has finally cleared. First it was a spy image, then some leaked brochure images – people kept guessing, but no-one could make out what exactly it was and when exactly was it to hit the showrooms. Initially people thought it was the R125, then some (including a few international publications) suggested that it was a 250. Finally, the clearest pictures yet of the new, face lifted R15 are here on the net, ending speculation, and hinting at a launch very soon.

As reported earlier, and visible from the pics, in its latest avatar, the R15 gets a good deal of cosmetic upgrades. Those ten spoke alloy wheels look sexy, but they appear to be a tad too fragile to handle the rigours of Indian roads. Who knows, Yamaha may probably have employed some extra strong alloy to compensate for the lost mass. They look stunning nonetheless.

Then there is the seat. Gone is the pillion friendly continuous seat. Yamaha have gone the whole hog and made the R15 a proper sports bike this time around with an elevated split-step seat. Nice to look at, much sharper than the earlier version, though practicality will be compromised.

The headlamp and tail-lamp have been duly refurbished as well. The design of the full fairing has been altered too. The rear tyre of the bike is decidedly wider, and has been duly covered with a hugger this time around. New paint scheme, new colours and a new exhaust completes the makeover of this tech-laden Yammie.

No word on the power output, though we expect the performance to remain unchanged. Speculation has been rife that Yamaha plans to slash the price of the new bike by about 10,000 rupees to push volumes. As expected of Yamaha, no details about the launch dates have been revealed. In fact the company is yet to say anything official on their plans with the new machine.

We have our evidence though. It’s here, and it’s for real. Now your two pence on the facelift please…