Home News Much awaited TVS Apache 250cc variant. Is this it? 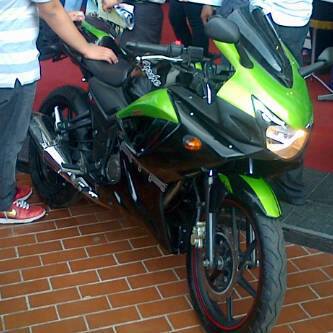 The TVS Apache has to be among the most loved brand name in the Indian performance bike segment. The Apache series of bikes, which are well known to have rev-happy motors and track-honed handling characteristics, have been selling in decent numbers and have given quite a few sleepless nights to the boffins at rival bike manufacturers.

However, with the launch of newer and more serious competition (read: Bajaj Pulsar 200NS), the Apache series of bikes have suddenly started looking a bit dated and underpowered.

There have been plenty of speculations regarding the South India based two wheeler maker readying a 220cc-plus variant of Apache and seen here is an image that might indeed be the first ever pic of the speculated Apache 250cc variant.

It is already being said that the bike you see here is undergoing tests at the Vehicle Research and Development Establishment (VRDE) at Ahmednagar, Maharashtra and the TVS Apache 250 might be launched towards the end of the new fiscal.

As can be seen in the pic, the Apache 250 sports a full fairing that should please the Indian bike buying crowd. Powering the big daddy of all Apaches could be an oil cooled engine instead of a liquid cooled unit. The bike is expected to come with a sticker price of less than INR 1.3 Lakhs. The bike will get ABS and fuel injection. The bike will also get an all disc brake setup with petal discs at both the ends. Safely expect the bike to have decent handling and ride quality.

All sounds good until you think of the possibility of this pic being that of a Mod-job executed really well. As can be made out, the bike sports the same headlamp unit that is found in the current variants and the edge of the fairing near the tank recess reminds us of the Honda CBR 250R. The faux air intakes at the front shout Gixxer.

However, the front mudguard, the disc-brake assembly and the rear-foot pegs definitely come from the Apache. So does the exhaust, the levers and the switchgear.

We aren’t yet sure if this bike indeed is the TVS Apache 250cc variant but what we are really sure of is that we want the speculated bike to look something like this.