Team India whitewashed the Sri Lankan team in the recently concluded One Day International series. Men in Blue won the series 5-0 against the hosting team with Jasprit Bumrah taking the Man Of The Series award. Bumrah received an Eicher Polaris Multix multi-utility vehicle for his outstanding performance in the series. The Indian cricket team was then taken out for a victory lap in Bumrah’s new ride by Mahendra Singh Dhoni around the R. Premadasa Stadium. Bumrah took 15 wickets in the Five Match series. 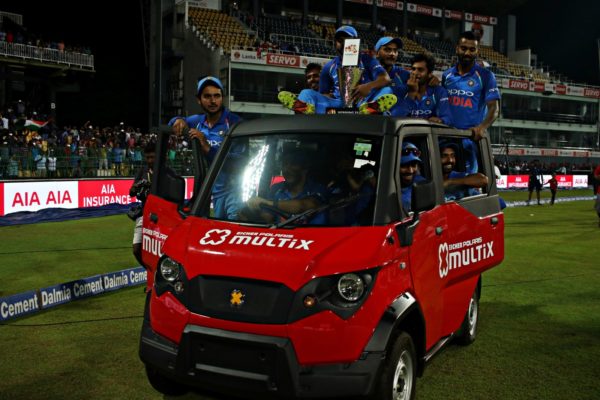 Check out the Men In Blue enjoying the victory lap in the Eicher Polaris Multix:

According to the manufacturer, the Multix is “India’s first personal utility vehicle” and comes in two variants and four colours. The Multix has been built to carry five people but MS Dhoni and boys had different plans, occupying the passenger seats, luggage board, doors and the roof! Providing power to take around the 11-member team across the stadium was a 510.7cc diesel engine that makes 9.8bhp of power at 3,000 rpm and 27.1 Nm of torque between 1,400-2,200 rpm.

Here are some more images from the victory lap.