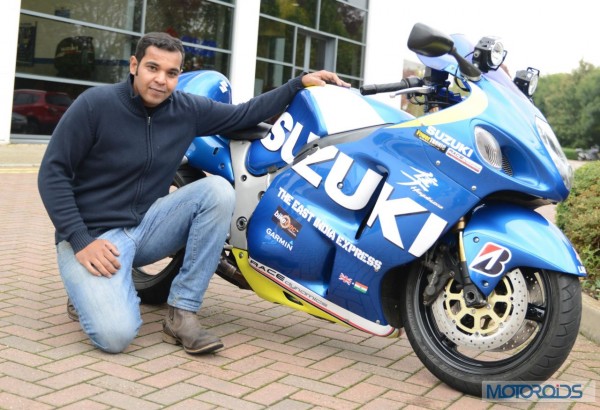 London based Indian motorcyclist Sushanth Shetty aims to set a new record by riding his Suzuki Hayabusa from the UK to India in the fastest overland journey between the two countries. Shetty will set off from the UK on Saturday 25 October and will ride his Hayabusa to France and through Europe to Turkey and then Iran. From there it will either be Pakistan, if his visa application is accepted in time, or Dubai, before arriving in India. Dubbed the East India Express, the journey is expected to take 15 days of riding if permission is granted to travel through Pakistan – however, a police escort would be required – or slightly longer if a deviation through Dubai is necessary, but Shetty is looking forward to the challenge.

Speaking about his record run Shetty said, “I’d always fancied riding a bike from the UK to India and came up with the plan in Bangkok while travelling through Asia. I’ve also done a bit of riding across Europe before. But I didn’t think I was cut out for six months or so of riding and ‘finding myself’; I wanted to do it as fast as possible. So I tried and thought about a few different bikes, but it had to be the Hayabusa. It should be a good journey and I’m looking forward to setting off. I’m looking forward to going to Sofia in Bulgaria, Ljubljana in Slovenia and Istanbul in Turkey. I’m also a bit apprehensive of Eastern Iran and Pakistan, but I’m also really looking forward to riding through Iran as a whole, and hoping I can do the whole thing to set the fastest overland journey time between the two countries, and that’s sticking to speed limits too.”

Sushanth already has his flight booked back to the UK on 23 November, after spending a few days at home. The bike will remain in India for India Bike Week in February before being shipped back to the UK.