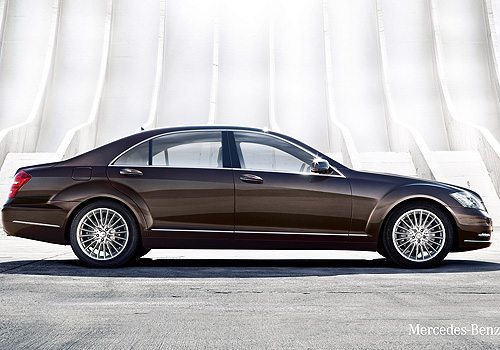 Move over, all you jealous plebeians who were rejoicing in the fact that the Maybach marque has finally been put to rest. The Maybach name is being resurrected by Mercedes-Benz, in the form of a top-of-the-line S-Class that will debut at the 2014 Los Angeles Auto Show next month.

The new Maybach will be a stretched version of the S-class and packed with even more creature comforts and features – as if that’s even feasible – than the range-topping S600 or S65. Speaking to Car and Driver, Mercedes-Benz head of global design, Gordon Wagener, confirmed that the new car will adopt the Mercedes-Maybach moniker as the German firm continues to drop the ‘Benz’ from its branding, as with the Mercedes-AMG GT and C63. Describing the S-Class Maybach as rolling “haute couture,” Wagener said it would come in around 5.5 metres, slotting in size right between the elongated S550 and the old Maybach 57.

A twin-turbocharged V12 is likely to undertake the task of moving this palace on wheels, with power being sent to the rear wheels. Wagener also revealed that other models under the Mercedes-Maybach name might be coming soon; an SUV based on the GL-class to take on the upcoming Bentley and Rolls-Royce utes and probably even a Mercedes Maybach coupe/convertible based on the S-class models.