MotoGP followers might remember what happened at Jerez. The Doc was struggling to carry speed into corners and as time passed he was dropped to third. The reason was the injury he had during a motocross practice session. Two weeks have passed and everyone wants him to make a comeback. And indeed he does. He sets the fastest time for the Qualify session and thus takes the pole position for tomorrow’s Monster Energy GP de France. Rossi attained his best lap time 1’33.408 on the 28th of the 30 laps he did on the Le Mans circuit. It is the first time Rossi is starting from the top of the grid position since 2005. 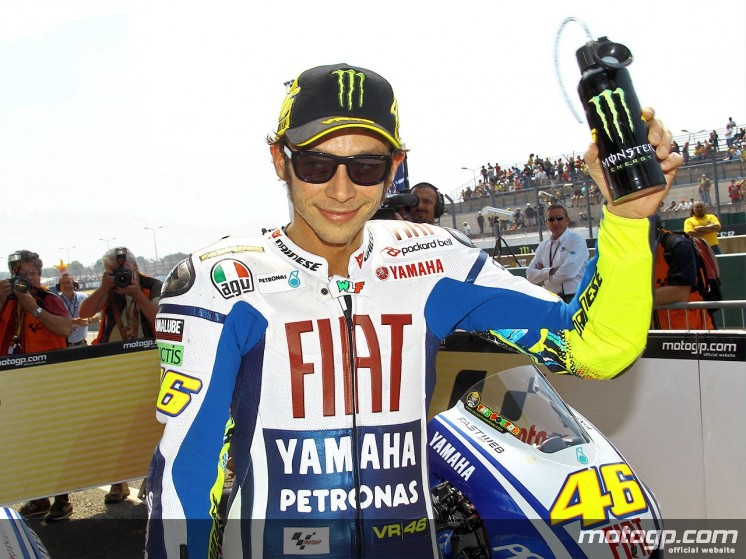 Rossi’s team-mate and the current leader was just 0.054s off Rossi’s best time, thus settled for the second place on the grid, while Dani Pedrosa completed the first row. Stoner, 0.416s off Rossi’s lap time, his team-mate Hayden and LCR Honda’s Randy de Puniet, at his home GP will start from the second row.  Dovizioso, Edwards and Capirossi were seventh, eighth and ninth on the grid while Pramac Ducati’s Aleix Espargaró completed the top ten for tomorrow’s race. Aleix’s team-mate Mika Kallio and Ben Spies will start from 16th and 12th respectively. Rizla Suzuki’s Alvaro Bautista wont be racing as his broken collarbone

is taking long to recover.

This is the seventh one-two qualification for Fiat Yamaha with Rossi and Lorenzo, which shows the rivalry growing between the duo. Wait for just one more day to see the race on your TV sets.