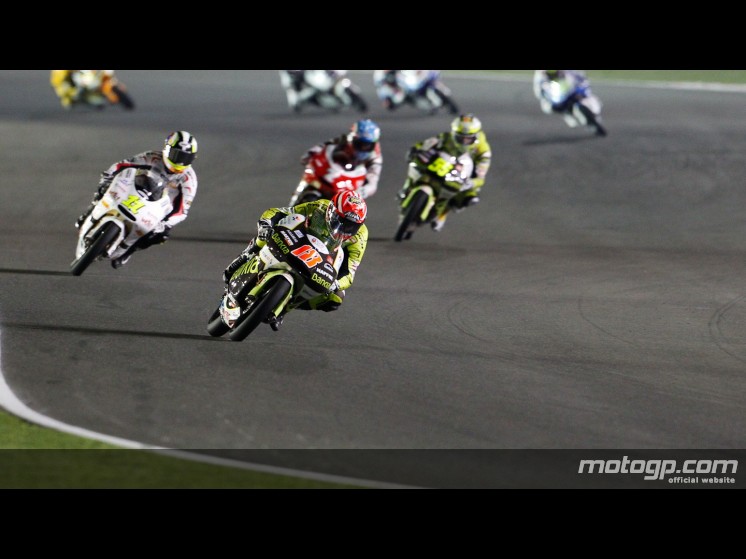 The first race of the 2011 MotoGP season has made it sufficiently clear that the Repsol Honda team and Casey Stoner are the top championship contenders this year. Except for the brief period in the beginning when Lorenzo led the pack, the Repsol Honda machines displayed their superiority around the entire track. Pedrosa managed to stay ahead of Lorenzo in second place for quite a good amount of time, and had it not been for Lorenzo’s stronger pair of family jewels as compared to Dani, he wouldn’t quite have managed to finish in second place – his machine was definitely not better than Dani’s. The Repsol Honda bikes were quite easily the fastest things on straights, and equally adept around corners as well. Lorenzo, however, known for his courageous riding style, managed to eventually finish ahead of Dani. Dani cited physical problems with his hand, which may be true, but at the end of it, Lorenzo appeared to be the more valiant rider throughout the race.

The two next bikes finishing the race were also Hondas, those of Andrea Dovizioso (Repsol) and Marco Simoncelli (San Carlo Honda Gresini) in fourth and fifth positions respectively.

In sixth position, we had Ben Spies, who after a brief fight with Rossi for the sixth position managed to arrive home with a comfortable lead. Rossi, who has been struggling with his bike and the injured shoulder raced a brave race, but his inferior health and equipment made itself quite evident. Hopefully the Desmosedici and the Doctor will do better going further into the season, but for now the chances of seeing our favourite racer on the podium in the next few races are rather bleak.

“After a great pre-season, we came into this race weekend and everything kept getting better and better for us. This morning in warm up we had a few issues getting a good feeling with the bike, carrying a full tank of fuel and this issue also affected us in the early part of the race.

“We knew though as the fuel level decreased and the tyres aged, that our bike would come back to us. Dani came past and we decided to follow to see where he was strong and where I was weak. Then when I started to feel more confident with the bike and had more grip and better turning, we decided to push forwards and take advantage.

“Tonight the bike was fantastic, as it has been for all the sessions and I’m very proud to be racing for Repsol Honda and to take my first victory in the first race. It is a great way to start the season! I’m really happy with how everything has gone and the way the team has all worked together, a big thanks to Honda and my best wishes to Japan in this difficult time.”

“I think maybe I am more proud of that podium than a race victory, that’s how I feel tonight. I feel very proud of myself and my team who never gave up and worked to give me the best bike that they can. I put everything I have inside into my riding on the track for the race from the start to the end and was on the limit every lap. I almost crashed on one corner but I managed to stay on the bike and finished in second position which is the best that I could do.”

“That’s the first race of the year done and dusted, it wasn’t picture perfect and I got pushed out a bit in turn one, getting trapped behind Barbera and Rossi the first few laps. They were fighting together which meant I lost touch with the guys in front. Other than that it was a good race, I struggled to get by Valentino for a while, he was riding really well and he’s not an easy guy to get around!

“Once we were able to get past we set fast lap times and the bike was feeling good. It was just the first part of the race that didn’t pan out, I didn’t get a lucky break on the start. We race in two weeks so I’m happy to get back on it at Jerez. It’s the first race of the year, I didn’t make top five but we got some points so I’m happy.”

Dani Pedrosa
“I’m disappointed, not for the race I had, but for the physical problems I had again with my left arm. Already in practice I felt something, but I was not sure if it could be that bad, at the end I couldn’t grab the handlebar and in the last seven-eight laps I couldn’t use the clutch at all. I was just holding the arm and I was suffering a lot. The bike was perfect all race, I had the chance to win but I had a very hard time, one of the toughest races of my life. I don’t know what can I do because should be OK after the rest I had this winter. I did the tests and everything was in order. In the winter tests I was a bit weak, but I felt alright, so I don’t know what we have to do. I feel sorry for my team as well, because the bike was very good, fast, perfect also in the corners. I’m proud of how I’ve been riding, I’ve been fighting with Casey (Stoner) in this circuit as nobody else did in the past but at the same time I feel sad because I don’t know what the future will bring. I know we will go to Jerez in two weeks, where the bike will run very well, and I’m very strong and fast, but I don’t know what will happen.”

“For sure we’re not here to get seventh-place finishes, but there are also positive things from this race, starting with the times, because we were lapping pretty quickly. I had a great start, and that was a nice feeling because the horsepower that this bike has really helps it to launch.

“Then I made a small error in the first turn, which is a shame because I got stuck behind Barbera for a few laps. Otherwise I would have been closer to Simoncelli and Dovizioso, since anyway there was a period when I lapped with them.

“I wouldn’t have beaten them though, because at the end of the race, I’m no longer able to ride like I have to. I’m not referring to the Ducati because even last year, after I hurt my shoulder, I had the same problems in the latter parts of the races, and since the two bikes are so different, it means that it’s really a matter of me not being physically right. It’s not just that. We also have to improve the bike because the others have clearly made a step forward since last year.
“Still, I learned a lot in this test and in this race, and we’ve already given very specific instructions about what must be done in the long term, in order to improve for the second half of the season for example. In the near term, on the other hand, we’ll work on the setup, we’ll keep gathering experience, and I’ll continue exercising and doing everything I can to recuperate physically.”