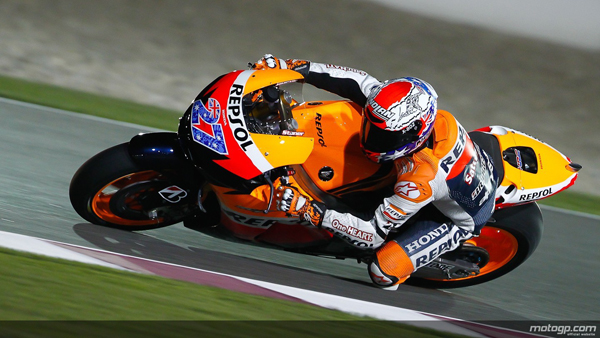 The 2011  MotoGP season started under the spectacular floodlights of the Losail circuit in Qatar. The new season was highly anticipated due to many reasons. The nine time World Champion Valentino Rossi was making his debut on Ducati. On the other hand it was the very first time an Indian rider Sarath Kumar commencing his career in 125 cc World Championship. The Repsol Honda team was on fire right from the very first practice session. Casey Stoner was leading all the way. Both Factory Yamaha riders, Jorge Lorenzo and Ben spies were also looking strong enough. As it was stated, all eyes were set on the Red bike clad in fluorescent yellow color.  Due to his shoulder troubles The Doctor was struggling as far as lap times were concerned.On race day Stoner made an excellent start from pole position ahead of Pedrosa. Rossi also made a terrific start with the new bike.  Lorenzo briefly lead the race before Pedrosa and Stoner made their attack on the defending World Champion. Randy Depuniet had an early crash in the race . Also taking early leave was Pramac Ducati’s Loris Capirossi. By this time around Dani Pedrosa was leading the race and Rossi was fighting hard with Ben Spies for 6th spot.  There was an intense racing action between the two Repsol Honda riders throughout many of the laps. The duo swapped the lead multiple times while Rossi continued his defense ahead of Spies. Meanwhile the Honda Gresini rider Marco Simoncelli was having close battle with Andrea Dovizioso for fourth position.

In the remaining half of the race  Stoner secured his first spot while Lorenzo was trying his best to pick up his pace and cut the tenths here and there.  But the Aussie was flying in new Repsol colors as he set the fastest lap of the race. At the back of the pack  Despite his mistakes Spies won the battle with Rossi for 6th place. Ducati’s Nicky Hayden struggled throughout most of the race, but with just five laps to go the Kentucky Kid managed to move up to ninth ahead of Honda’s Hiroshi Aoyama.

In the last five laps Stoner checked out ahead of the competition with more than a three-second lead. Tension was high in the battle for second though as Pedrosa retook the position ahead of Lorenzo. Also refusing to give in was Dovizioso, who shot ahead of Simoncelli back into fourth. With just three laps remaining Lorenzo pulled a great pass ahead of Pedrosa, this time creating distance and making his move stick.

Eventually Casey Stoner made a great Debut with Repsol Honda with his first win of 2011 season.  Lorenzo was happy and pleased with second place ahead of Pedrosa, who earned third in the order. A. Dovizioso came fourth after having close fight with Simoncelli in the final laps. Further back in the order Spies achieved sixth after his pass on Rossi, with the Italian being followed by Edwards in eighth. Another Rookier Cal Crutchlow  finished  just outside the top-10 in 11th after a last second pass ahead of Ducati’s Karel Abraham. It was not a good start for 2010 Moto 2 World Champion Toni Elias who had a crash towards the end of the race.

Stoner was delighted after the race. “After a great pre-season, we came into this race weekend and everything kept getting better and better for us. This morning in warm up we had a few issues getting a good feeling with the bike, carrying a full tank of fuel and this issue also affected us in the early part of the race. We knew though as the fuel level decreased and the tyres aged, that our bike would come back to us. Dani came past and we decided to follow to see where he was strong and where I was weak. Then when I started to feel more confident with the bike and had more grip and better turning, we decided to push forwards and take advantage. Tonight the bike was fantastic, as it has been for all the sessions and I’m very proud to be racing for Repsol Honda and to take my first victory in the first race. It is a great way to start the season! I’m really happy with how everything has gone and the way the team has all worked together, a big thanks to Honda and my best wishes to Japan in this difficult time”.