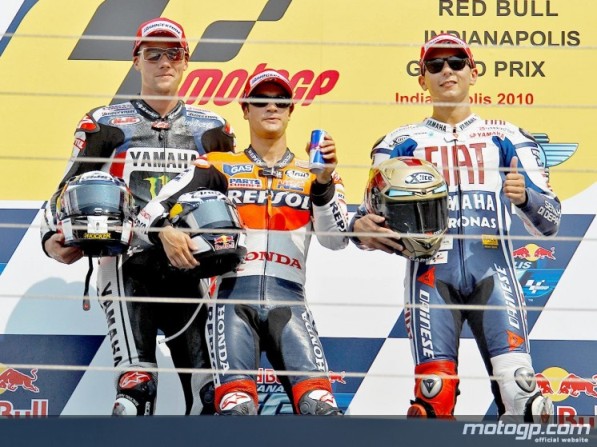 The big news in racing world that was officially announced before round 11- 9 time world champion Valentino Rossi is finally leaving Yamaha as he’s going to ride the Ducati next year. According to Rossi his job on Yamaha is finally done and he’s looking forward to new challenges. After his crash at Mugello he’s still not able to get back to winning ways yet. In qualifying round of   Indianapolis the defending world champ crashed three times due to poor grip and bumpy nature of   the track.

All other riders were also complaining same thing about the track. On race day Dani Pedrosa proved that his fight for the world championship isn’t over yet, as he registered his third win in this Moto GP season. The surprise package of the race was Ben spies who scored his 1st pole position on Saturday. The Texan has already signed up for FIAT YAMAHA team next year. The race had a normal start with no big dramatic moments. The Honda Gresini rider Marco melandri crashed very early in the race. Ben spies led the race for few laps. He was enjoying full advantage of home track. His lap times were even faster than Lorenzo who was on a factory Yamaha bike.

On Lap 5 Hayden was passed by his Ducati teammate, Casey Stoner, for sixth-place. Further back Mika Kallio and Alvaro Bautista were running in ninth and tenth respectively as Pedrosa began to close in on Spies for the lead. In one swift move Pedrosa flew by Spies on Lap 6 during the start/finish straight. The Spaniard then began to pull away from the American after setting the fastest times lap after lap.

Meanwhile Stoner, who had been been struggling with grip levels with his Ducati machine all weekend long, lost the front-end at Turn 11. The Aussie was forced to call it quits when the crash broke his handlebar. Yamaha Tech 3’s Colin Edwards also retired early after experiencing minimal grip levels from his hard option rear tire. On Lap 7 Lorenzo moved into third-place ahead of Dovizioso while Pedrosa continued pulling away from Spies. Further back Rossi was more than nine seconds adrift of Pedrosa in fifth-place as he started pressuring Dovizioso for fourth.

“This was a good race for us after the weekend,” Rossi said. “Fourth is quite good in the circumstances but the important thing is that my rhythm in the race was strong and I felt much happier on the bike. I did some good laps and I wasn’t too far from the other Yamahas, but unfortunately I paid a lot for my lack of fitness in this heat and in the end I had to stop pushing because I didn’t have any strength left in my body. I’m happy
though because we came back to a good setting and with me riding well, and if you consider I had three small crashes in the weekend, fourth isn’t so bad. Now we will look forward to Misano, my home race!”
Hayden, without any knee slider, crossed the line sixth and more than 35 seconds adrift of Pedrosa. Only eight-hundredths of a second separated San Carlo Honda’s Marco Simoncelli and Rizla suzuki’s Alvaro Bautista as they took the checkers in seventh and eighth respectively.
Pramac Racing Ducati’s Aleix Espargaro was nearly eight seconds behind in ninth, with Ducati’s Hector Barbera rounding out the top-10 finishers.
Page 1 of 2. Go to next page for the Indianapolis race result listing