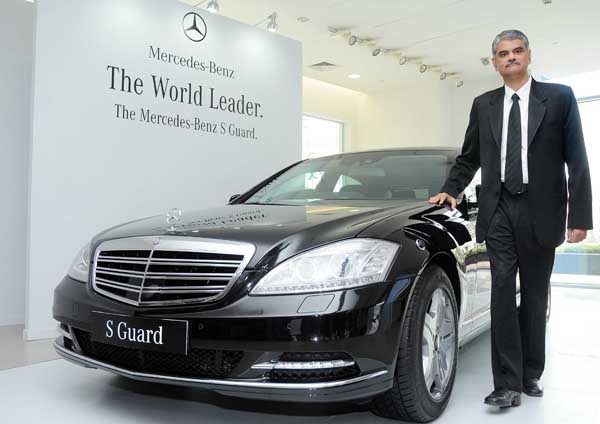 German car giant Mercedes-Benz on Monday launched its armored limousine S-Guard with a price tag of around Rs 6 crore (ex-showroom) making it the most expensive car to hit the Indian market. The S- Guard which is built in line of the S600 is housed with a 12 cylinder 5.5 cc petrol engine which churns out 517hp and 830 Nm of max torque and can touch a maximum speed of 210 km per hour.

Mercedes-Benz India board member Suhas Kadlaskar said the S- Guard is engineered to provide effective protection against the threats posed by terrorist attacks. ”The armor is designed to resist rifle-launched projectiles from military weapons, which have a velocity almost twice that of bullets fired from a revolver. They also offer resistance to shrapnel from hand grenades and explosive charges,” he added.

The car is basically targeted at corporate and political leaders, government officials and celebrities and incorporates all the luxury features of Mercedes limousines. The S- Guard now surpasses the Maybach, also manufactured by Mercedes which comes with a price tag of Rs. 5.5 crore.