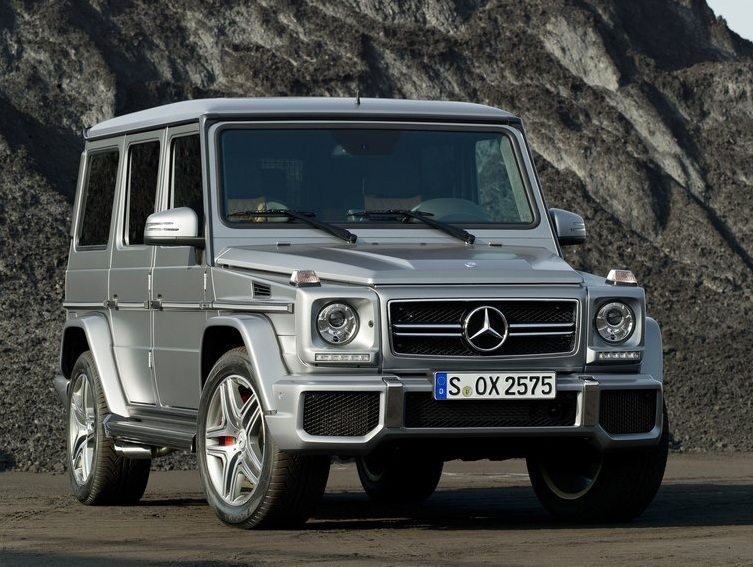 The German luxury car manufacturer’s Indian division launched the G63 AMG on 19th February, 2013. The glaringly expensive SUV emerged amidst much fanfare and clever co-branding attempt. With a constant reminder at regular intervals, the role of the car in the movie `A Good Day to Die Hard`, the PR went a step further with offering complementary premier screening passes. Launched jointly by MD & CEO, Mercedes Benz India., Mr. Eberhard Kern and Mr. Vijay Singh, CEO, Fox Star Studio India, the G63 was clearly the cynosure of all eyes despite its clips from the movie being played in loop on displays all around.

The G63 retains the basic design essence of the original vehicle that was launched 34 years ago. The familiar boxy looking wagen, has been yet again given the AMG treatment to replace the G55 AMG. AMG, did what it does the best, make a luxury car even faster and louder by plonking in street legal Turbo-charged/Supercharged engines and clever software and sophisticated hardware to keep all the manic power under control. Predominantly, the G class was never a SUV, it always has been a cross country vehicle/wagen as the `G` suggests. This also means the traditional body-on-ladder chassis construction and relatively simple suspension set-up. The G also in an off roader fashion sports tow away hoops/hooks in the bumper, with that kind of brute power, I will use these to pull out others in trouble. 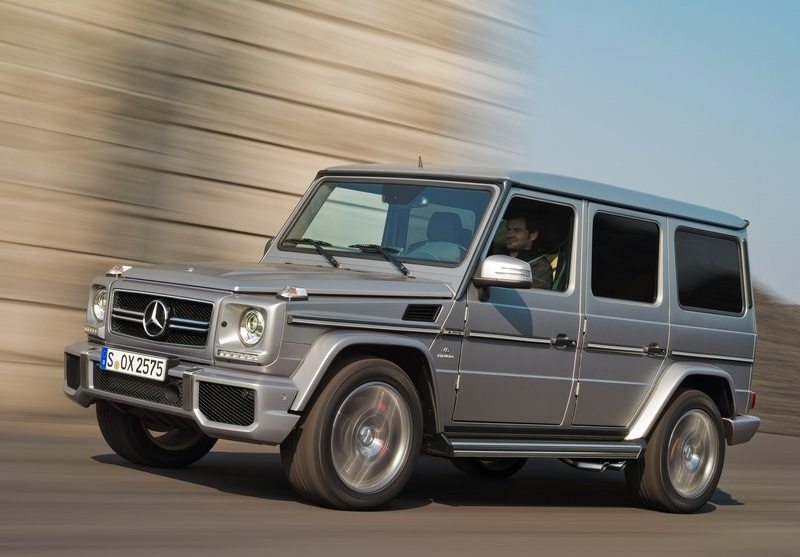 Starting with the exterior, the front end of the G gets the industry popular upgrades of the day time running LED lights under the projector head lamps.The front end bears the familiar boxy look with a chrome bull bar and a big Mercedes-Benz logo in the centre. A closer look reveals the massive intercoolers for the `bi-turbo` engine nestling in the bumper low down on either sides. The bonnet which covers the lumpy engine is clam shell type. Over all the body retains flat panels all around, small doors and small glass/window area. Even the windshield is flat-ish. There are hardly any curves or creases on this car. Without sounding mediorcre, this in my and Indian perspective is a mix of the Mahindra Bolero (rear three quarters ) and a cross between 1st generation Tata Sumo and Tempo Trax (front end). Rather, the latter cars could have possibly taken styling cues from this original timeless off road design of the G. The car has big 20 inch AMG alloy rims with a fat low profile rubber. The exposed door hinges, old school window pane rubber sleeves, thumb press door open handles, high mounted fender-wing turn indicator/lights and many other bits and pieces are keeping with the traditional look. Critics may argue about the interior space, heavy tailgate, wide-ish door shut lines and much more, but retaining these itself keeps the classic look alive. One would expect much more for this price tag, but let’s remind ourselves of the 911 and the Range Rover, the designers have an enormous challenge while designing the newer evolution of these versions while keeping the familiar shape of these cars, the sole reason how they are recognized. The shape of the G lends it a poor Cd of 0.53, similar to the Hummer H2. In layman terms, the design does little to reduce the wind resistance as speed increases, even harder job for AMG boffins then. The G hasn’t got the massive road presence, and I doubt if it will get any second looks from an average passerby.

Taking a peek underneath, one can spot the ancient looking live axles at front and rear. This displaces the opportunity to accommodate clever suspension packages like McPherson struts, double wishbone coil over damper etc. Whereas AMG must have tweaked the suspension by adding anti roll bars, control links and optimizing damper and spring rates, the least they could have done is added air springs and linked it with the onboard computer system inarguably lending it better ride dynamics than what it manages currently. What the overall design does manage to hide is its weight, tipping the scales at 2.6 T, but still managing 0-100 in 5.4 secs., this is no slouch by any lengths of imagination. 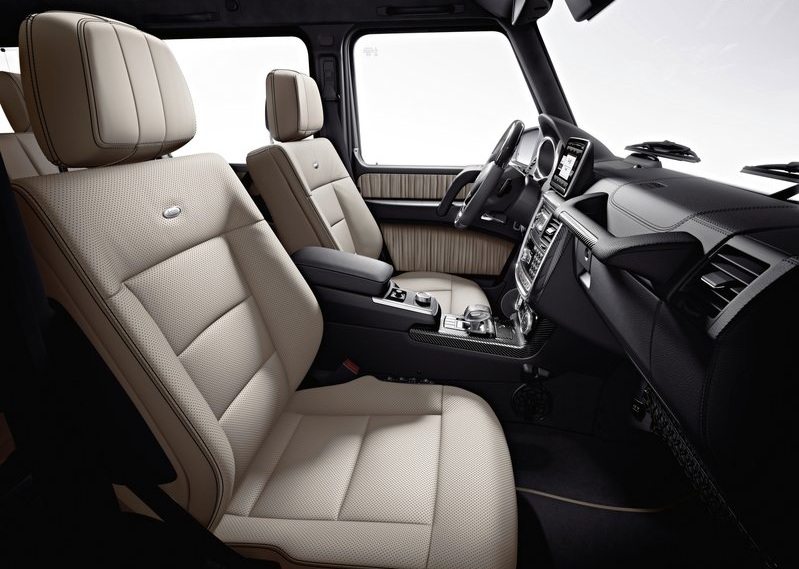 Climbing inside, one is greeted by the high level of build quality which one expects from the Three pointed star. The interior, like the exterior is again a mixed bag. Pull the door, and despite its traditional hardware (locking mechanism) it shuts with a thud albeit with a bit of effort. The G has the shallowest dashboards on any SUVs, the flat and straight windscreen meets the dash within about 6-7 inches. The small glass area makes you feel claustrophobic in a way. No beige coloured trim used here, apart from the beige inserts on the seats and the door panels. The speedometer console, gear selector lever and the centre console are the only things about the interior that are of contemporary design. The rear seats are flat and bench like, and even though they do have 3 headrests, I presume it will jeopardize the comfort of the 3rd passenger. I noticed that the air con vents too, are small and square, no doubts they would be sufficient to do the job they are assigned though. The centre console comprises of the regular HVAC controls, a big satnav screen perched in the centre top and not built into the console in itself. The tail gate is heavy (blame it on the spare wheel) to operate, and there are no jump seats at the rear. Just an opinion, the G could have been provided with a sliding middle row of seats to make make the small cabin roomier.

All said, it remains to be seen how this power monster fares on the road. After all I may fall victim to the experience and the G will grow upon me as well as it does to others. 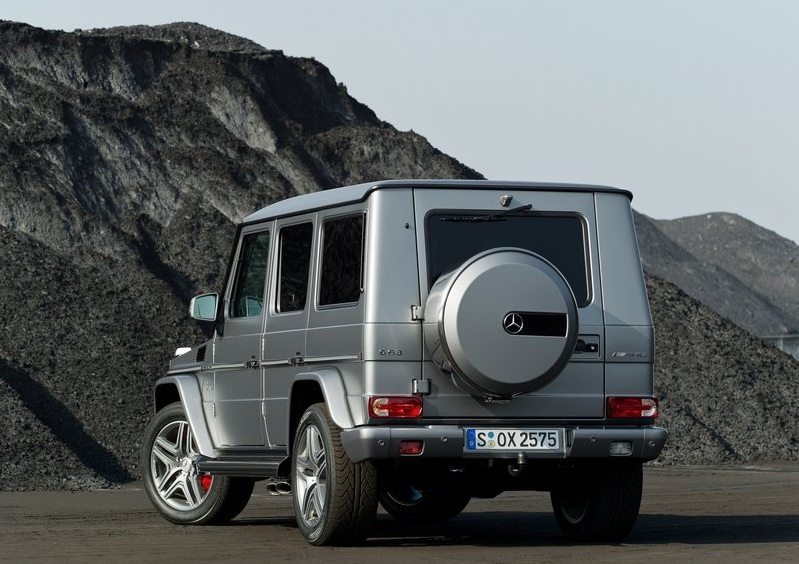