Home News Mega news: First ever pictures and details of the 2012 CBR1000RR? 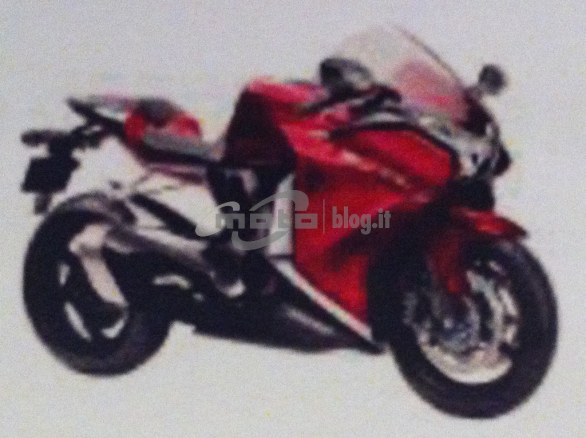 These are what an Italian blog is calling the first ever ‘leaked’ images of the much awaited 2012 CBR1000RR Fireblade. Our first reaction? WHY!? This is not the Fireblade, and even if it is, it’s properly extinguished and blunted. What’s Honda’s obsession with that ugly looking full fairing that should ideally have been banned right from the time it made its first appearance on the V4 Concept, and later the VFR1200F.

We somehow managed to live in a world with Honda bikes draped in those ugly clothes, but a CBR1000RR with that fairing, spare us the torture, Honda. Please! I’ll pray with clasped hands to god, every night before going to sleep that Honda doesn’t employ that front treatment to the legendary ‘Blade.

Unfortunately, the information from some of the more informed mortals about the subject is that the V4 Concept may pave the way for the 2012 CBR1000RR, which by the way is going to be powered by a V4 engine. And we hate our existence to know that.

To be honest, the current Blade itself doesn’t quite hold a candle to its previous generation, 2008 model. But that big, bulky VFR1200F fairing would be visual agony! That stuff is not meant to be put on anything even remotely sporty! You don’t need designers for that observation; a toddler with little sense of aesthetics would tell you that with confidence.

We still have hope though, as those photos have apparently been sent via an anonymous email. So it’s essentially a Pepsi, with nothing official about it. The pictures were allegedly ‘stolen’ from a presentation that the Italian blog refuses to disclose for reasons related to privacy. How we wish these pictures are a con-job, with nothing even remotely to do with the real thing. The person who has sent the mail is saying that the bike will sport a Ducati Style single sided Swing-arm. What’s more, the bike may end up being christened the RVF1000RR. God, what the world has come to!

While there may not be any certainty about the picture, there are things which are known about the 2012 CBR1000RR. The new version of the much revered bike will be announced in November this year. It won’t be a minor upgrade, but a comprehensive overhaul over the current version.

In its 2012 avatar the CBR1000RR will be a seriously hi-tech machine. Advanced electronics such as Traction Control, and the next generation C-ABS system will find place somewhere within the bodywork of the new bike.

Some relief on the aesthetics front comes from reports which suggest that there won’t be any drastic changes made to the bike’s visuals. The new bike, according to these reports will have a smaller exhaust, a revised side fairing and modified headlamps.

One thing is for sure, having been known as the kings of the motorcycle arena worldwide, Honda must be working very hard on their 2012 CBR1000RR. Their reputation as the leaders in bike technology is at stake. If they can’t beat the S1000RR on the street, even a MotoGP title is nothing more than a worthless token trophy. Hope they get the 2012 Blade sharp as a razor and hot has fire. Amen!