Home BMW Meet the 2014 BMW X4 in its production avatar 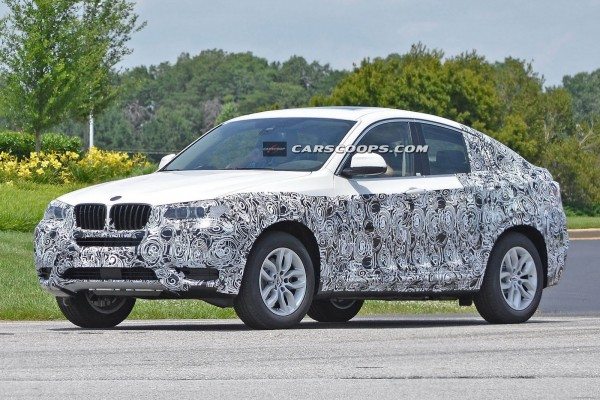 We reported in detail when Bavarian car maker BMW unveiled the X4 Concept at the 2013 Shanghai Motor Show. Now, a near-production ready version of the 2014 BMW X4 has been spotted testing. While the test mule wears considerable amount of camouflage, it is easy to see that the car isn’t wearing any “dummy-panels” and it can also be observed what the production spec car would look like.

On comparing the spy shots that we see here to the pics of the X4 Concept, it can be stated that the production version stays very true to the concept in terms of exterior styling and the only changes that the car has are the less futuristic headlamps, less chrome and a slightly less sporty bumper.

The X4 will borrow its engine options from the X3. However, a plug-in hybrid version too could see the light of the day.

The BMW X4 shares the platform with the X3 and sports a coupe-crossover styling similar to that of the BMW X6. In essence, the X4 will play baby brother to the larger (and pricier) X6.

The BMW X4 has been codenamed as F26 and will share the monocoque steel platform with the second generation X3. It is expected that the car will also share its engines and underpinnings with the X3. The BMW X4, the Mercedes GLA and the upcoming SUVs in the Audi Q range. .future surely looks promising for a typical German SUV/Crossover buyer.