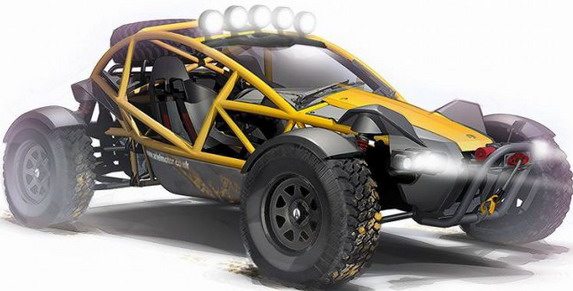 What happens when the protons and neutrons in an Atom are bored of their tarmac loving nucleus and decide to break-free, see more of the country side? The result is this Ariel Nomad, an all-terrain cousin of the super focused Atom. To be unveiled at the Autosport show on the 9th of January, the Nomad is described by Ariel boss Simon Saunders as “Atom’s mucky brother”. Building further on the traditional strengths of the Atom, the Nomad will take on the rough with gusto, courtesy of enhanced ground clearance, gumball tyres, long-travel suspension and new rollover protection.

The Nomad uses a modified version of the Atom’s bronze-welded, ladder frame chassis and the wide-tracked suspension continues to be an all-independent setup. However, the components and geometry are different considering the terrain this Nomad would venture into. On the other hand, instruments, switchgear, pedal box and wiring are all borrowed from the Atom. When the Nomad goes into production next year, Ariel could offer different footwear sizes as option, however, prototypes have been tested on 15-inch alloys shod with 235/70 tyres. The power plant continues to be a four-cylinder Honda unit mounted transversely behind the two occupants, as in the Atom. However, this isn’t the one borrowed from the Civic type-R but a 2.4-litre unit that has been tuned to pump out 200bhp+, while offering pletny of low-end torque. The gearbox is a manual six-speed Honda unit and the Nomad will also come with a standard mechanical limited-slip differential offering personalized setups in the options list. The lower tub and suspension covers on the Nomad will be all-black impact-absorbing composite, but owners and people who don’t take Batman too seriously will be able to personalize their cars by choosing their own colours for the wheels, frame, bonnet and engine cover.

Expected to weigh about 700kg, which is about 150kg more than an Atom, the Nomad should have about four times the power-to-weight ratio of a Land Rover Defender.