McLaren Automotive celebrated the build of the 5,000th model based on the carbon fibre MonoCell chassis on 2nd February, which forms the recently renamed and announced McLaren Super Series, in the fourth full year of vehicle production. Launched initially with the 12C in 2011, and followed by the 12C Spider and then the 650S and Asia-only 625C, the Super Series is now the highest volume carbon fibre supercar range ever. This milestone comes shortly after McLaren delivered more than 1,400 Super Series in 2014. 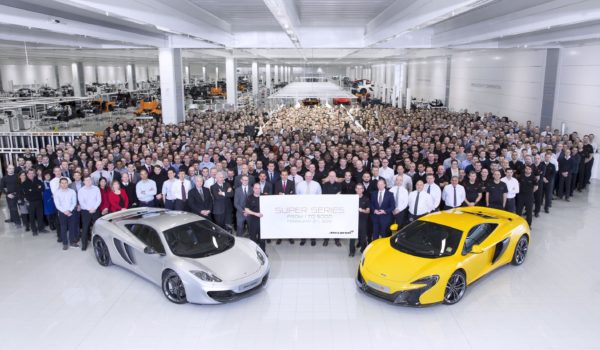 The 5,000th car, a Volcano Yellow 650S Coupé commissioned for a customer in Australia rolled from the assembly line in the McLaren Production Centre on Monday 2nd February. It was joined at the end of the production line by the first production 12C, which has now become part of the McLaren Heritage Collection.

Production of the 12C began at the start of 2011, with these early models assembled by approximately 30 employees in a designated manufacturing facility within the McLaren Technology Centre. Deliveries commenced globally from June, before the state-of-the-art McLaren Production Centre opened its doors in November, becoming the birthplace of all McLaren roadcars. The bespoke facility was designed by Foster + Partners, and combines outstanding quality with highly efficient production methods. It is now a home to over 500 employees working across the manufacturing and logistics operations.

In March 2014, the assembly line was updated to accommodate the production requirements for the new McLaren 650S in response to strong customer demand.

‘McLaren has come a long way in four short years. The completion of the 5,000th vehicle in the Super Series is a fantastic milestone for the brand. The 12C was, and still is, a groundbreaking supercar and, true to the values of McLaren, we have continued to develop and build on this great product into the 650S which has delighted our customers and won countless awards across the world,’ said Mike Flewitt, Chief Executive Officer at McLaren Automotive.

‘We have built a solid foundation for the business, delivering record numbers year on year, and I look forward to our next production milestone with the addition of the 675LT to the Super Series, and the new Sports Series later in the year.’

The McLaren Super Series forms the core range of McLaren supercar offering and sits above the recently announced Sports Series in the model hierarchy. The family of models will be soon expanded with the recently-announced McLaren 675LT, confirmed for global reveal at the 2015 International Geneva Motor Show in March.